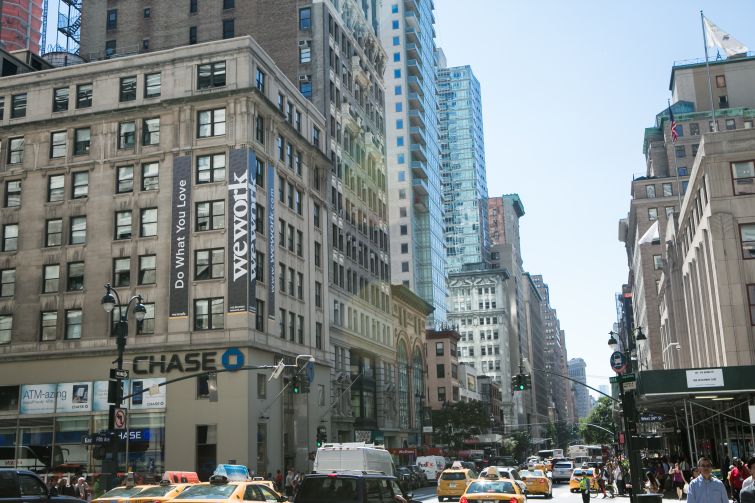 349 Fifth Avenue, left, when WeWork was a tenant. The coworking giant closed the location in 2021. Photo: WeWork

Luxury Italian furniture company Giorgetti has leased a showroom and offices at 349 Fifth Avenue on the southeast corner of 34th Street for its first Atelier Giorgetti Manhattan.

The space encompasses the entire eighth-floor penthouse of 8,000 square feet along with exclusive access to a 4,000-square-foot roof deck. The 10-year lease had an asking rent of $75 per foot, according to online documents.

“We are thrilled to have helped Giorgetti expand in the U.S. with their first New York City showroom,” Khan said. “349 Fifth Avenue has incredible views of the Empire State Building, is conveniently located and is equipped with the only full-floor rooftop terrace out of all of the furniture showrooms in this district.”

The building owner, Zar Property NY, was represented in-house by David Zar, Julian Zar and Patrick Finn and declined comment. Zar purchased the property from JPMorgan Chase in 2009 for $18.58 million, at which time the bank signed a long-term lease for the retail space.

The 70,000-square-foot office property sits opposite the Empire State Building. It was featured in the WeWork drama “WeCrashed,” as it was the coworking company’s second-ever location.

The building was recently reconfigured into high-end office space with a new entrance canopy and lobby at 2 East 34th Street. Both pre-built and build-to-suit options are available, with the few remaining floors having an asking rent of $59 per foot.

Since the fall of 2020, Giorgetti USA has been using a two-bedroom model apartment at The Centrale, a 71-story residential condominium at 138 East 50th Street, as its headquarters in New York.

According to CEO Moreno Vitaloni, the new space will become a showroom concept the company describes as “Atelier,” and branded Atelier Giorgetti Manhattan — as well as encompass its corporate offices.

“I was attracted by the building itself for its architecture, by the fact that is conveniently located in the NoMad Design District and so it makes it easier for the trade to stop by and pop in. But most of all I was stunned by the view offered on the rooftop, literally breathtaking,” Vitaloni wrote via email. “The Empire State Building is just across Fifth Avenue … the exact same block, just opposite. Having such a landmark this close is truly a privilege. We are an extremely high-end Italian lifestyle brand, active in the interiors business (residential, condos, retail, commercial) and we want to offer our clients ‘experiences’  which differ from visiting a regular showroom to ‘just’ see furniture.”

Atelier Giorgetti and its rooftop will be venues where these experiences will be delivered, he said, from wine-tastings to luxury watch collectors events and so forth. “The possibilities are endless and experiences build memories, and I am sure it will make the difference,” Vitaloni wrote. “The rooftop will be set up as a hyper-sophisticated rooftop, with state-of-the art bio-pergolas and three Giorgetti outdoor vignettes, which might certainly be used by our guests while sipping a glass of Italian wine.”

The company recently terminated a collaboration with an independent reseller in the NoMad Design District. Until the new store opens around Labor Day, if supply chains cooperate, it is using a temporary space in Midtown.