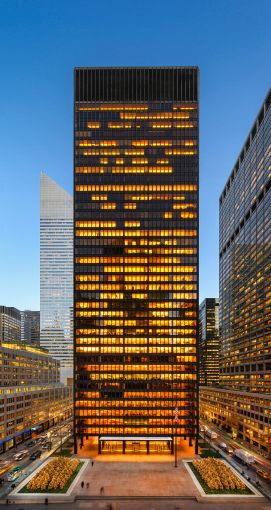 CD&R signed a long-term deal to renew and expand its headquarters in the building, according to RFR. The firm will sprawl across the 17th, 18th and 19th floors plus one other floor. The landlord declined to disclose the asking rents.

AJ Camhi, who handled the deal in-house for RFR with Paul Milunec, said in a statement that the landlord was “thrilled to be able to accommodate their growth while providing them with an amenity package that is unrivaled in today’s market.”

The landmarked tower, at 375 Park Avenue between East 52nd and East 53rd streets, boasts a 34,000-square-foot amenity space dubbed the “Seagram Playground,” which Camhi said helped persuade CD&R to renew and expand its lease. The lower amenity floors include sport courts, a rock-climbing wall, multipurpose rooms and a town hall for large events.

CD&R closed on its deal earlier in May and will move into its expanded space at the end of this year, when other tenants relocate within the building, Camhi said. Newmark’s Andrew Sachs and Ben Shapiro represented CD&R in the renewal and expansion. Sachs and Shapiro did not immediately respond to requests for comment.

RFR also scored some other leases in the building recently, including asset-management firm Sound Point Capital expanding its footprint from 10,827 square feet to 30,728 square feet across the 33rd and 34th floors in a 10-year deal, according to the landlord. CBRE’s ​​Chris Corrinet, Ben Friedland and Silvio Petriello handled it for the tenant. A spokesperson for CBRE did not immediately respond to a request for comment. Asking rent ranged from $155 to $200 per square foot.