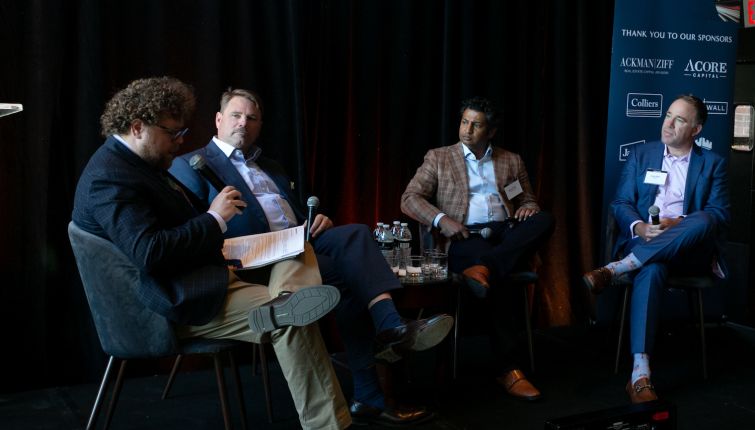 During Commercial Observer’s latest Future Forward event, held May 10 at the Ritz-Carlton Georgetown in Washington, D.C., some of the best minds in the industry got together to talk about some of the biggest opportunities, disruptions and pressing challenges facing the commercial real estate industry. A big focus of the conference was on technology and ESG.

The premise of the talk was that corporations around the globe are competing for top talent, and a major aspect of that is creating buy-in through culture and technology.

Gross noted there has been a shift and call to action by companies the past few years in regard to innovation, with new technologies being utilized — and with that new risks.

Mack, who teaches a class in disruption in real estate at Wharton, talked about the importance of allowing a team to succeed on its own. “I lead by example and don’t ask anyone in business to do anything I wouldn’t do myself or haven’t before,” Mack said. “And once you ask someone, don’t second-guess them. You have to trust them to exercise judgment. Empower people and make sure they know the scope of authority.”

The conversation turned to hot markets. When asked about where his company is looking to make loans today, Ziff noted a lot of capital is going towards multifamily in high-growth markets, and life sciences is also strong. “It’s a good market to be a lender in,” he said.

“One thing everyone has in common is change,” Gross said addressing the panelists. “You are all thinking about embracing the future.”

One of the big topics bandied about was sustainability, with Phillips talking about companies working to go carbon neutral, and Panda explaining a 10-point plan for owners to get to net-zero carbon and reduce energy demand. Stein added that analytics can track energy consumption and help save meaningful dollars.

Panda and Phillips differed on the importance of amenity apps, with the latter noting it has been super valuable for Jamestown.

The panelists also spoke about the future of the metaverse, smart buildings, Local Law 97, and bridging digital and physical assets —such as what is happening at 1 Times Square in New York.

CO’s Gross was back for a third time, moderating the session “Building Community Through Real Estate Development,” with a panel that consisted of Monty Hoffman, founder and chairman of Hoffman & Associates, and Mark Ein, CEO of Kastle, who joined virtually.

The two men shared the story of how they met and the beginnings of The Wharf, which started with the land acquisition for the stadium of the Washington Kastles professional tennis team back in 2011. Hoffman noted he saw potential in the area immediately. “It’s almost a mile of shoreline on the waterfront in the nation’s capital,” he said. “While other cities were advancing their waterfront, the District of Columbia was not.”

Ein had a front-row seat to watching Hoffman’s vision of the $2.5 billion, mixed-use development along the Potomac River come to life and called it “extraordinary for anyone who has been there.”

Ein also spoke about Capital Shield, the public-private partnership between the Washington, D.C. Metropolitan Police Department and commercial property owners, businesses and institutions, where security cameras are linked to better protect the public. The Wharf has more than 400 cameras tied to a command center, allowing people to come to the waterfront with their families and feel safe.

When Gross asked Hoffman if he thought a development like The Wharf could be done someplace else in the D.C. region, the exec mentioned there was some room in Union Market and along the riverfront in Georgetown that he could see as possibilities.

The latter organization trains more than 2,000 minority students annually across 125 universities to work in the real estate industry, and several of the local students involved in the program — including at Howard University and George Washington University, were in the audience.

“How do we change the trajectory of diversity and make it an active goal?” Coen asked the panel.

“Our contribution is about talent,” Bobo said. “High school, college and veteran students, we pay them to learn. It’s one thing to be a hard worker. It’s another to demystify the skills you want.”

PGIM’s McDonnell championed Project Destined. “What resonated with our team is we want the best talent, and the only way to find that is a wider net and wider pool of people to choose from,” he said.

Pay said it’s not enough to just increase the numbers, but to create an ecosystem to further development.

Pestronk discussed the company’s first entry into the D.C. market, the recent $200 million acquisition of 1825 and 1875 Connecticut Avenue, two office towers in Dupont Circle that he plans to convert to residential.

“What we saw was the office market had been struggling because of old buildings, but when repositioned, they would do well, but a lot weren’t and couldn’t, so prices came down to where it made sense to convert this office into multifamily,” he said, explaining there will be 700 apartments under construction in 2023 at the location.

Fineman talked about the success of The Boro in Tysons, and how his company likes to create ecosystems with tenant flexibility. All three agreed D.C. zoning laws made it easier to do conversions like this than in New York and other U.S. cities.

Barrett began by speaking about the takeaways from the latest IPCC reports regarding past, present and future changes to Earth’s climate, and options to becoming more resilient.

“Our recent reports have shown that the planet is warming faster than we thought and humans are the majority of the cause,” Barrett said.

Bergemann discussed the efforts of HUD, which subsidizes 4.5 million affordable housing units and pays $7 billion in utilities, in carrying out its plan for 100 separate climate actions, including a focus on greenhouse gas reduction and environmental justice.

Arena noted that JPMorgan decided five years ago to lead on climate, and has set an ambitious 10-year green initiative target for the company, with the first five years having accomplished a transition of 45 percent of power to green energy.

Greiwe spoke about how Fifth Wall raised significant funds for a carbon impact fund, noting climate has increasingly become a talking point for the company’s corporate clients. Working with them to become more resilient and decarbonizing their assets has been a strong focus.

Seelamsetty talked about the importance of the digital twin, and how that’s been a game changer in the industry as it allows a building owner to know everything going on in the building at any given time.

The panelists also chatted about how climate intelligence is central to value creation and strategic differentiation in the real estate industry, and touched on the industry’s impact on climate change overall.

The panelists discussed how crucial it is for commercial real estate firms to be proactive about cybersecurity, as well as to map out plans for what to do in the event of a ransomware or some other cyber attack.

In the final panel of the day Andy Shallal, founder and CEO of Busboys & Poets, spoke one-on-one with Greg Fitchitt, president of the Columbia, Md., region at The Howard Hughes Corporation, in a seminar entitled “The Future of Hospitality.”

The duo discussed the path to Shallal opening a Busboys & Poets in Columbia — which he did earlier this year — and how the beloved restaurant acts as a gathering place in every community it’s in, and strives to welcome a diverse clientele.

John Falcicchio, D.C.’s deputy mayor for planning and economic development, brought the day to a close with the closing keynote, listing a three-pronged plan to bring D.C. back, chief among them getting federal workers back into the office.