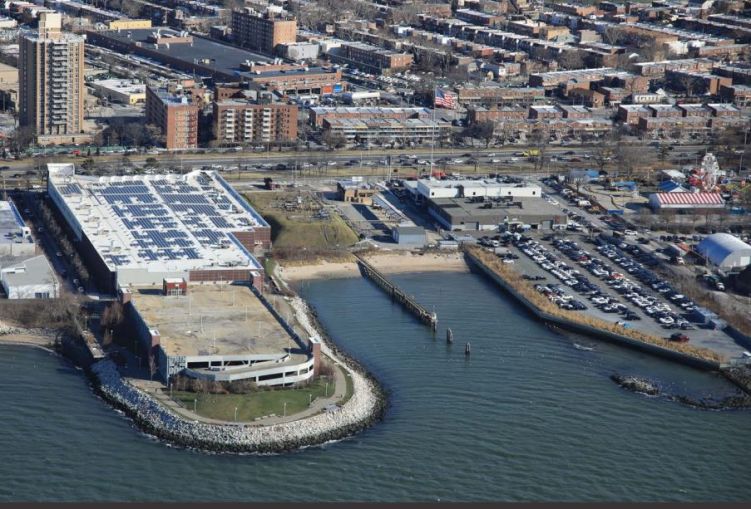 The Allegretti family, which has owned and operated the Bayside Fuel Oil Depot Corporation for several decades, has put one of its large fuel oil terminals in southern Brooklyn on the market, according to JLL.

The 2.5-acre property at 1776 Shore Parkway in Gravesend includes a small two-story building — which the Allegrettis used as their main office — as well as several fuel oil tanks. The site, which is zoned M3-1 for industrial and commercial uses, also includes 14 acres of deeded water rights, extending out to the bulkhead of the shoreline along Gravesend Bay, JLL said. The fuel oil terminal is right off Belt Parkway, which allows easy car access to the Verrazzano-Narrows Bridge, the Brooklyn-Queens Expressway and the I-95 corridor.

The brokers marketing the property hope to ground lease it for either 49 or 99 years, with an asking price of $2.25 million annually, or $20 per square foot on the 110,000-square-foot parcel. The current zoning allows up to 870,000 square feet of industrial, retail or office development. A JLL capital markets team of Michael Mazzara, Brendan Maddigan, Stephen Palmese, Ethan Stanton and Winfield Clifford plan to start publicizing the site this week.

Mazzara said he could imagine an industrial user ground leasing the property, but that it could be a good spot for retail stores, medical uses or even apartments with a rezoning. The waterfront access could be valuable to many kinds of industrial users, including a developer building turbines for an off-shore wind project off Long Island.

“It’s such an interesting piece of property that we are very much excited to find out what the highest and best use is of the property,” he said. “It could be industrial, it could be retail, with Caesar’s Bay mall next door. There are other uses. Is this a hospital location? Is it an affordable housing residential development?”

He pointed out that a site like this would be asking double or triple the ground rent in a more tony part of Brooklyn, like Williamsburg or Gowanus. And the industrial market in the five boroughs has been very constrained during the pandemic, making potential development sites like 1776 Shore Parkway valuable.

“I think industrial is like the sweetheart of what’s going on in New York City,” Mazzara said. “It’s crucial and we’ll see if industrial and logistics are the winning bid.”