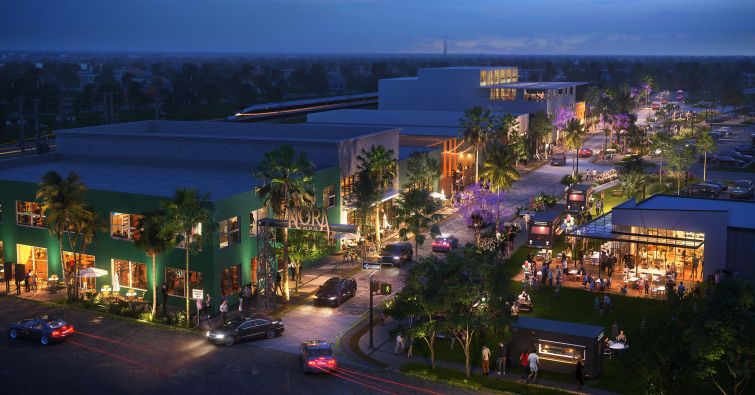 Renderings of how Nora could look once redeveloped. Photo: ArquitectonicaGEO

West Palm Beach will be moving in a new direction as developers begin executing on a plan to remake an industrial neighborhood north of Downtown into a food and retail hub. The district, rebranded “Nora,” spans 40 acres in the environs of North Railroad Avenue, and will include 2 million square feet of residential and office development, as well as a hotel.

The redevelopment is being led by NDT Development and Place Projects, which spearheaded the reshaping of Miami’s Wynwood district. Wheelock Street Capital is financing the venture with a budget of up $150 million for the first phase alone, Bloomberg reported.

Nora — three and a half years in the planning — will be Wheelock’s third investment in West Palm Beach after the recent acquisitions of the Ben, a luxury hotel, and buildings on Clematis Street and Banyan Boulevard, in partnership with Brand Atlantic.

The city of West Palm Beach recently approved regulations for the Nora district that allow for over 2.5 million square feet of development within it. Urban planning firm PlusUrbia had a hand in creating the major design elements as Downtown expands.

The developers plan to improve the walkability, safety and residential supply in the district, in an effort to position it as a bridge to Downtown, per a statement from Joe Furst, founder of Place Projects.

While the Nora district spans 40 acres, NDT Development and Place Projects have rights to 15 acres across 72 individual properties within the neighborhood, according to a press release from the partners. It is not clear at this time whether the remaining 25 acres will need to be acquired for further development.

Bordered by Palm Beach Lakes Boulevard to the north, North Dixie Highway to the east, Quadrille Boulevard to the south and the Florida East Coast Railway to the west, the Nora district sits just north of the central business district and Brightline train station, and with its proximity to the entrance of the Flagler Memorial Bridge, there is easy access to Palm Beach Island, according to the developers.

The first phase is expected to kick off over the summer, and could include adding cobblestone streets and a park designed by architecture firm ArquitectonicaGEO. The whole project has is projected to be completed in the fourth quarter of 2023.