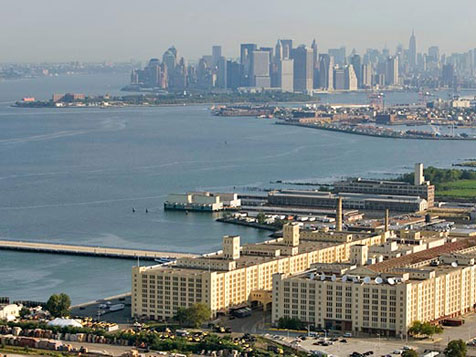 This lease is nothing to sneeze at.

The company, founded in 2001 by Michelle Feinberg, turned away from high fashion at the onset of COVID-19 in the United States, and its shift to PPE looks to be more permanent with the manufacturer signing a three-year lease with the Brooklyn Army Terminal landlord New York City Economic Development Corporation to bolster its production.

“The local production of PPE is essential to our health care workers and our city, so we are always prepared,” EDC President Andrew Kimball said in a statement. “We must be forward-thinking as we address our city’s future pandemic preparedness.”

But the tenant plans to create 500 new jobs and bring an estimated $73 million in economic benefits to the area.

Feinberg’s team prototyped and made more than 590,000 hospital gowns in just nine weeks as the health crisis emerged and created shortages in hospital supplies. With its new Brooklyn Army Terminal manufacturing hub, New York Embroidery Studio is expected to create 500 new jobs and bring in an estimated $73 million in economic benefits to the area.

“We want to bring high fashion’s drive for innovation and quality to PPE manufacturing, by developing novel and sustainable products for our clients,” Feinberg said in a statement.

Not only is the material the New York Embroidery Studio uses in the isolation gowns biodegradable, the mayor’s office said the production methods used at the facility will reduce waste and the city’s carbon footprint.

The stuido has had a relationship with the city for several years now, having accepted grant funding through the Fashion Manufacturing Initiative from 2014 to 2018 for new equipment, upgraded technology and improvements to its Manhattan facility at 307 West 36th Street. It will continue to operate both locations.