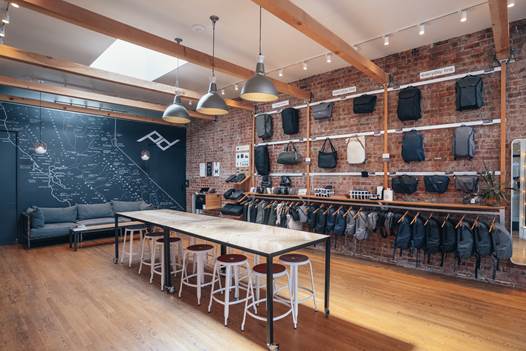 Peak Design — which produces bags and equipment for photographers, travelers and commuters — is heading to Nolita for its first East Coast outpost.

The gear company snagged 2,050 square feet on the ground floor and 1,500 square feet in the basement at 241 Lafayette Street between Prince and Spring streets in a seven-year deal, according to Katz & Associates’ David Yablon, who represented the retailer. Asking rent was $111 per square foot.

“[The space] was somewhat of a blank canvas that they could make their own, and there was ample space for them to grow as well,” Yablon told Commercial Observer. “There are high ceilings, brick, exposed beams … it fits well with who they are.”

California-based Peak Design has one location in San Francisco and another in Tokyo, but this will be the retailer’s first outpost on the East Coast. The company reached out to Yablon in 2019 to look for a space in the Big Apple that had a similar to the vibe of its San Francisco flagship store, Yablon said.

When the pandemic hit, Peak Design delayed its opening plans and decided not to lease a space on Mulberry Street in Nolita, Yablon said. But the retailer restarted the process over the summer and was able to snag enough space for the firm to grow into — along with a deal with protections in case of any pandemic-forced closures, added Yablon. Peak Design’s lease follows a wave of luxury retail leases in nearby SoHo as stores seek out direct-to-consumer outposts with favorable rents.

Sinvin Real Estate’s Christopher Owles and Sarah Shannon represented the landlord of the co-op-owned building, Lafayette Street Leasing Associates, in the deal, which closed on March 4. Owles and Shannon did not immediately respond to requests for comment.