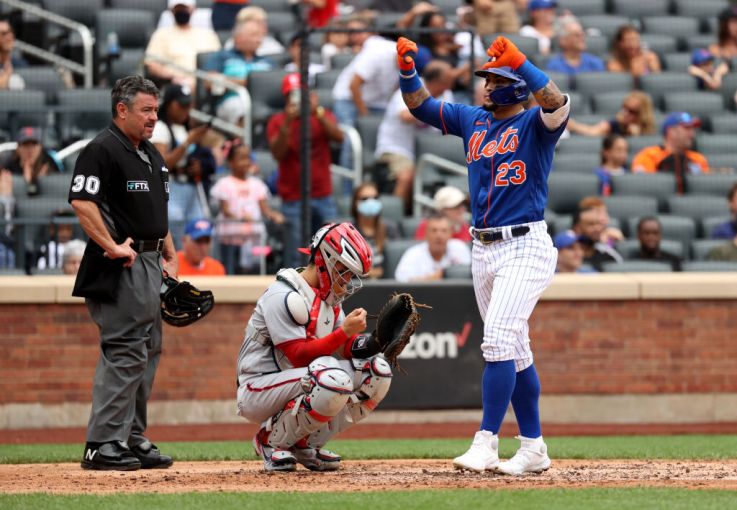 Javier Baez #23 of the New York Mets reacts after hitting a two run home run during the bottom of the fourth inning of a game against the Washington Nationals at Citi Field on Aug. 29, 2021 in New York City. Photo: Dustin Satloff/Getty Images

New York City’s private employer vaccination mandate — put in place during the waning days of Bill de Blasio’s administration — would bar unvaccinated players from competing in the city as well as Toronto thanks to a separate Canadian requirement, the New York Daily News reported. Brooklyn Nets player Kyrie Irving violated the rule on Sunday by sitting courtside at a NBA game, scoring the team a $50,000 fine.

Mayor Eric Adams recently loosened coronavirus-inspired restrictions in the city by removing a vaccination requirement for indoor visitors of restaurants, gyms and concert venues, but the private sector mandate for in-person and public-facing workers to be vaccinated remains in place. The mayor’s office did not immediately respond to a request for comment from Commercial Observer, but told the Daily News that it would not make individual exceptions, though the requirements could shift depending on the state of the global pandemic.

The Mets, whose season was slightly delayed by a dispute between players and owners, was among Major League Baseball’s least vaccinated teams last season, having fewer than 85 percent of its players vaccinated, according to the Daily News. At least 85 percent of Yankees players were vaccinated last season, though right fielder Aaron Judge dodged questions about his status last summer and again on Tuesday, saying, “We’ll cross that bridge whenever the time comes.”

Mets players Pete Alonso, Francisco Lindor and Max Scherzer did get their shots last year, while teammates including JD Davis and James McCann have stated that getting vaccinated is a personal choice, the Daily News reported. Major League Soccer team the New York City Football Club is also covered by the mandate, and its entire team is vaccinated against the coronavirus, according to the Daily News.

The Yankees could lose some unvaccinated players as well — Yankee’s manager Aaron Boone said last Sunday that some of his players are still unvaccinated (though most have gotten their shots), The Star-Ledger reported.

Boone was concerned about traveling to Canada — which requires all travelers to show proof of vaccination at least two weeks prior to their arrival — to play against the Toronto Blue Jays. Ultimately, Boone said it is up to the players to choose to get vaccinated.

“I think we still have a few guys at least that aren’t vaccinated, so we’ll be monitoring that situation closely and see how that plays out,” Boone said on Sunday. “But it’s a concern.”

Unvaccinated players in the 15-team American League would lose out on a paycheck as well if they miss games due to Canada or New York City’s rules, according to an agreement between the owners and the players union.

The Mets and the Yankees did not immediately respond to requests for comment.