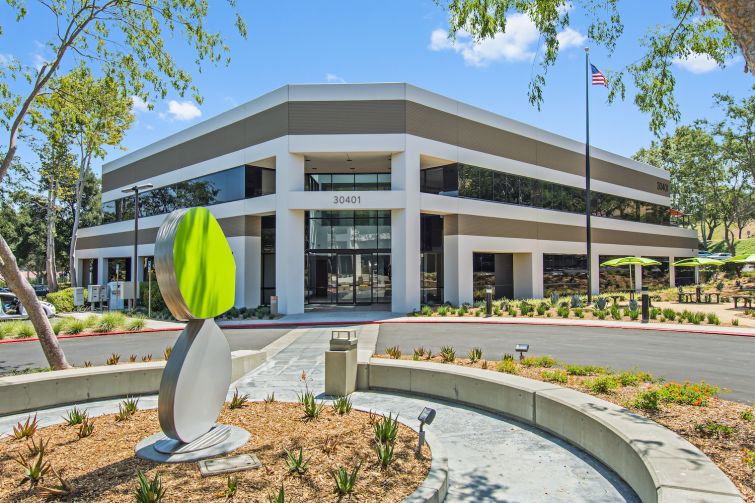 The property, called Agoura Hills Business Park, was completed in 1987 in the city of Agoura Hills. photo: Harbor Associates

Harbor Associates and Gemdale USA have started a new joint venture and acquired a 113,991-square-foot office and lab property located in Los Angeles County for $29.7 million. The deal recapitalizes the suburban office property. Harbor Associates acquired it in January 2020 via a joint venture with a private Kansas City-based Platform Ventures, which exits the investment.

The property, called Agoura Hills Business Park, was completed in 1987 in the city of Agoura Hills on the eastern edge of the Conejo Valley, between Westlake Village and Calabasas. The 6-acre campus at 30401–30501 Agoura Road includes a couple of two-story office buildings around a central plaza fronting the 101 Highway.

Harbor will continue as operating partner in the new joint venture with Pasadena-based Gemdale as the two firms see a continuation of the rising tide of life sciences expansion in the Conejo Valley, according to Gemdale’s Tim Nguyen.

“A portion of the property has been successfully converted into lab space, which plays well into our bullish view on the growing life sciences demand in this emerging submarket,” Nguyen said. “Despite the COVID-19 headwinds, Harbor has increased occupancy to 94 percent by attracting the life science groups who have been actively expanding in the Conejo Valley.”

The Conejo Valley is home to Amgen, one of the world’s leading biotechnology companies, and has benefited from the expansion of other major life sciences and biotech firms and startups, including Baxter, Allergan, Takeda Pharmaceuticals and Medtronic.

CBRE’s Matt Heyn and Caitlin Hoffman were tapped to lease the property.