In the Wake of COVID-19, Savvy CRE Investors Are Broadening Their Horizons 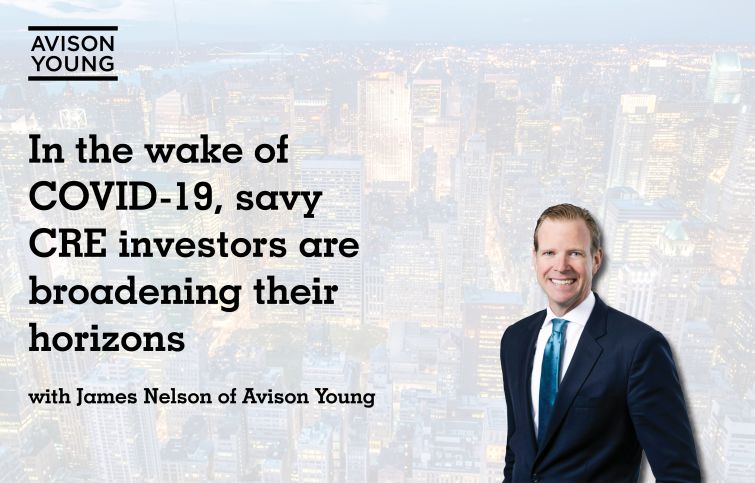 For New York City’s commercial real estate veterans, the city long seemed like investment’s north star. But as COVID-19 has changed so many aspects of our lives, so too have certain investment basics been turned upside down. Partner Insights spoke with James Nelson, principal and head of tri-state investment sales at Avison Young, about changing factors within New York’s investment landscape.

James Nelson: COVID caused people to rethink their investment strategies. When I started in the business over 20 years ago, New York was the only game in town for international investors. Secondary and tertiary cities weren’t a consideration. But between the pandemic and hybrid work, investors are considering those other markets. Also, universal rent control is being discussed in cities and states across the country. These are all considerations investors need to think about.

Given all that, how should investors evaluate potential CRE investments differently now than they would have in years past?

Job growth was once the No. 1 consideration for making investment decisions since the more jobs you have, the more office space, apartments and retail you’ll need. But with work going remote, you have to look at where people are living. New York City, for example, had an uptick in population from 2020 to 2021, and now rents are above pre-pandemic levels. That’s something for investors to consider, because job numbers don’t paint the full picture.

New York multifamily is facing the expiration of Affordable New York and a potential Good Cause Eviction law. What does this mean for New York’s multifamily investors?

Gov. Kathy Hochul keeping the 35-year abatement for 421a — which will become 485-w — would be very important for getting projects built. A lot of developers have been waiting to build until they know what the new abatement program will look like. If you keep the same abatement but make the affordability requirements greater, that’s going to put downward pressure on land. Land owners won’t sell, developers won’t buy and we’ll have luxury condominiums on the one hand and fully affordable projects on the other, leaving out market-rate rentals. The way to solve the affordability crisis in New York is not more rent regulation. The answer is to build more apartments.

While rental land sales seem to have taken a pause, the demand for existing multifamily is strong. New York multifamily has had, despite tighter rent regulations, a huge run-up in activity and volume. Last year, there was $1.4 billion in multifamily sales in the fourth quarter, almost double the average of the prior four quarters. The reason is that the average cap rate in the fourth quarter of last year was 4.8 percent. In the Southeast, home to the so-called growth markets where there’s no discussion of regulation, those apartment buildings tend to trade in the 3 percent range. So, an investor buying at a 3 percent return has to hope rents go up 10, 15, 20 percent year over year. In New York, though, if you can buy in around the mid- to high-4 percent range, even if our returns are capped in the future — and they’re talking about the greater of 3 percent or 150 percent of CPI [the Consumer Price Index — you’re still starting off with a much more attractive yield. So, New York City investors are being rewarded for taking on this potential regulatory risk. By way of example, Brandon Polakoff, principal and executive director of tri-state investment sales at Avison Young, just closed two large multifamily portfolios — one in Brooklyn and one in Manhattan — for over $80 million.

If the way out of the affordability crisis is to build more, does New York City have enough available land to make a dent in the problem?

We did a study looking at the unimproved land in New York City, and it was only 1 or 2 percent in Manhattan; in the boroughs, maybe 3 to 4 percent. Staten Island was the only borough that had double-digit percentages of available land. So, this is the challenge for development. In many cases it’s going to be taking down older, defunct buildings and upzoning certain areas near high-density and well-located assets within proximity of transportation. Right now, there is a state cap on the amount of residential you can put on a lot — it’s 12 times the lot area. Gov. Hochul has mentioned eliminating the cap on residential FAR [or floor area ratio] to create more housing. I would be an advocate of doing this because the way to create this housing will be redeveloping existing properties as opposed to finding vacant land.

How have retail and office been affected by the last two years from an investment perspective?

Since COVID hit, retail rents are, in some cases, only a quarter or a third of what they were at peak levels. A lot of that has to do with the decline in international tourists. In 2019, New York City had close to 70 million tourists, and this past year, we only had half that. When people start traveling and shopping again, that will be a huge boost for retail.

We have seen a few investment groups jump back into this investment market, as best represented by our sale of the retail condo at 501 Broadway. The ultimate purchaser was previously priced out of New York City, but saw a window to reenter the market coming off the heels of the pandemic.

As far as office, employers are improving their office stock — the flight to quality. Office pricing has remained pretty consistent even since before COVID, when the average price per foot was just over $1,000 a foot, with an average cap rate around 4 percent. That’s basically what we’re seeing now. The major fourth-quarter sales last year were core-type transactions, including the sale of 441 Ninth Avenue for over $1 billion. Investors are buying well-located, trophy class properties with long-term leases. The real question is, what happens with the Class B and C buildings that are experiencing higher vacancy, especially if they have higher levels of debt they can no longer service? It would not surprise me if we started seeing a lot more sales in that arena.

As more corporations officially announce plans to implement a hybrid-work model, we’ve seen a recent uptick in office demand. Our team recently put two boutique office buildings under contract: one in SoHo, and one in Midtown East. The belief is that office property owners will be able to lure tenants back into their buildings with strategic, concierge-like amenities, allowing tenants to be more comfortable making long term-commitments.

Given how the market for investments has been shaken up in recent years, what are some of your favorite alternative investments of late?

With COVID, there’s been a huge uptick in demand for urgent care centers and walk-in clinics. Our team sold a portfolio of CityMDs for a 575-cap last year. Those are great investment opportunities. Then there’s industrial. Nationally, industrial sales eclipsed office sales for the first time. There’s a huge demand for that given the current pressure on last-mile logistics, especially in cities. Also, life sciences. New York has a lot of room for growth, and those are three asset classes to watch.