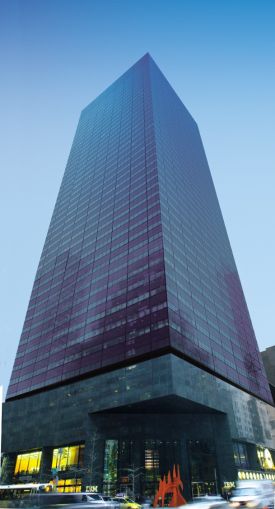 Compass Group, a Latin American investment manager, also took 7,613 square feet on the 33rd floor in a relocation from 135 East 57th Street. Infrastructure manufacturer Nexans Group had the smallest of the leases, with 3,674 square feet on part of the 40th floor.

A CBRE spokesperson didn’t disclose the lengths of the leases, but the asking rent for the spaces ranged from $125 to $145 a square foot.

David Kaplansky of Colliers represented Compass and TJ Hochanadel of JLL handled it for Nexans.  Spokespeople for JLL and Colliers didn’t immediately return a request for comment.

“As one of the most prestigious office properties in the Plaza District, 590 Madison Avenue is well positioned to serve the real estate needs of boutique financial services companies, which have been very resilient and are extremely active in the market,” said Edward J. Minskoff, president of the eponymous firm. “Our robust amenity program including a tenant-only fitness club with state of the art equipment, golf simulator, yoga studio, locker rooms and curated fitness classes, a conference center, and tenant lounge provide an office environment ideally suited for the desires of the new workforce.”

The 1-million-square-foot 590 Madison, commonly known as the IBM Building, is owned by the State Teachers Retirement System of Ohio (STRS) and managed by Minskoff Equities. IBM developed the building in 1983 and sold it in 1994 to Minskoff Equities and STRS. The tech giant remains the property’s largest tenant, along with a roster of companies that includes Corcoran Group, Morgan Stanley, Crowell & Moring and Colony Capital. Edward Larrabee & Associates designed the  office tower, which features a glassy public atrium connected to Trump Tower.