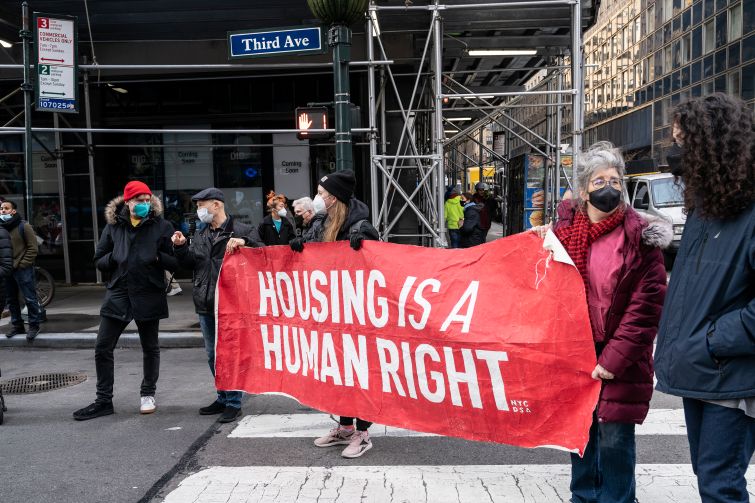 A pair of lawsuits wending its way through the federal court system threatens to overturn one of New York’s most important pieces of tenant protection law — rent stabilization.

The U.S. Court of Appeals for the Second Circuit heard oral arguments on Feb. 16 in the two cases, RSA and CHIP v. NYC and 74 Pinehurst LLC v. State of New York. In both instances, landlords argue that the rent-regulation system violates their constitutional property rights, because it constitutes a “taking,” a seizure of private property or a government overreach that interferes in an owner’s right to do what they want with their land. The two lawsuits claim that requiring landlords to offer a renewal lease to rent-stabilized tenants is unconstitutional, because owners do not have the option to re-rent the unit or offer it to a family member unless the current tenant violates their lease.

In the first case, the main plaintiffs are the Rent Stabilization Association (RSA) and Community Housing Improvement Program (CHIP), two groups that represent small landlords in the five boroughs, while the second case was brought by a group of small landlords.

The landlords and their trade associations sued the city and the state, along with the state housing agency and the city rent guidelines board, in hopes of taking their case to the U.S. Supreme Court. Jay Martin, the head of CHIP, said that the lawsuit aims to reform New York’s rent laws, which had only become more onerous since the state legislature eliminated vacancy decontrol and strictly capped the amount of renovation costs landlords can recoup through rent increases in 2019. He argued that rent-stabilized apartments were now “significantly devalued” compared to market-rate rentals.

“The government is asking the owner to subsidize the difference in the operating costs from the [rent-stabilized] unit to the free-market unit,” Martin said. “There need to be protections on rental cost increases, but if we’re saying the government should be controlling the cost below what the rent guidelines board’s own data is saying the cost is, that’s where the taking is.”

Martin hopes that a court decision would “set up guard rails for rent control methods that allow for fair compensation to be provided” to landlords.

Federal appellate judges seem skeptical of CHIP’s arguments. But the landlord group could find an unexpected victory at the now-majority-conservative Supreme Court, if it agrees to hear their case down the road.

Meanwhile, the tenant lawyers who have stepped in as defendants in the case argue that overturning New York’s rent laws would lead to legal chaos and displacement for low-income New Yorkers.

“They want to roll back the rent-regulation law that covers 2.5 million New Yorkers,” said Ellen Davidson, an attorney at The Legal Aid Society, which is representing three tenant groups in the case. “Each tenant would negotiate a new rental agreement with their landlord and move on from there. If CHIP wins, there would be mass displacement of tenants throughout New York City. A huge percentage of rent-stabilized tenants are low income.”

During the hearing in Manhattan federal court, Andrew Pincus of Mayer Brown, the attorney representing CHIP and RSA, claimed that the state legislature could pass a new rent-stabilization law if the current one was struck down in court. The landlord groups have suggested that perhaps good-cause eviction — which the state legislature is considering — could replace rent stabilization as a form of tenant protection.

“We think the New York legislature will pass a law that will deal with this in a way that is constitutional,” Pincus said. One of the justices shot back that his argument was “purely speculative.”

Pincus and the other landlord attorney, Kevin King, posited that rent stabilization kept their clients from exiting the rental business if they wanted to do so.

“Aren’t you getting very close to an argument about zoning being limited?” asked Judge Guido Calabresi, who pointed out that there were other regulatory factors at play besides rent stabilization that prevented rental landlords from doing other things with their property.

Meanwhile, another one of the appellate justices noted that rent stabilization and similar tenant protections have been upheld in federal courts for decades.

“All of the basic elements of [rent stabilization] have been in place for a very long time,” said Judge Susan Carney. “There have been some additions and tweaks since 2019. But still, you know, you have to show that it’s unconstitutional in all its applications. And yes, there have been some modifications and how exactly that is expressed. But that’s a tall order.”

Indeed, Davidson from The Legal Aid Society noted that the current rent-stabilization framework has been in place since 1969. The Supreme Court has also upheld forms of rent stabilization in recent years, which means it would be unlikely to overturn the policy now.

“When we talk about this case, it’s challenging a law that’s over 50 years old,” Davidson said. “New York City has had pretty strict rent-control schemes for almost 100 years. They’re challenging laws that go back to the 1920s. How did [the landlord attorneys] deal with the Supreme Court’s prior decisions that had upheld similar regulatory schemes? It was not something that was easily answered. There’s decades of precedent about this and they were not close decisions.”

Landlords, for their part, hope that the lawsuits will lead to reforms in the rent-stabilization laws, which they feel became too restrictive in 2019.

“If this isn’t a taking, what is?” asked David Kramer, who runs a large affordable housing development firm, Hudson Companies. “Our insurance, our water bills, our taxes — you have big increases year after year that the city has just chosen to ignore for the past eight years. And on the state side they took away vacancy decontrol. I remember thinking the legislators will be patting themselves on the back but it may take a generation to see the deferred maintenance in these buildings.”

He argued that releasing rent-stabilized apartments onto the free market would help lower rents across the board in the five boroughs.

“Part of the problem with the rent-stabilization system is that everyone who has snagged one gets limited rent increases as long as they stay in one,” Kramer said. “If the field was even in some way there wouldn’t necessarily be the same differentials in rent, which creates an expensive rental system. You now have a new marketplace for these 3 million apartments.”

He added that while the state and city needed to enforce tenant protections, rent regulation had created a system of winners and losers in the rental market while making it harder for landlords to operate buildings without losing money.

“There is a legitimate role that the state should play in housing,” Kramer said. “But you have to balance out having to protect tenants with having the right system in place. You want landlords to have the ability to get rid of shitty tenants. That’s best for the whole ecosystem. There are always bad actors on both sides, and you have shitty landlords who harass tenants to get them to leave. Maybe you don’t regulate the entire system based upon the actions of a few bad actors.”