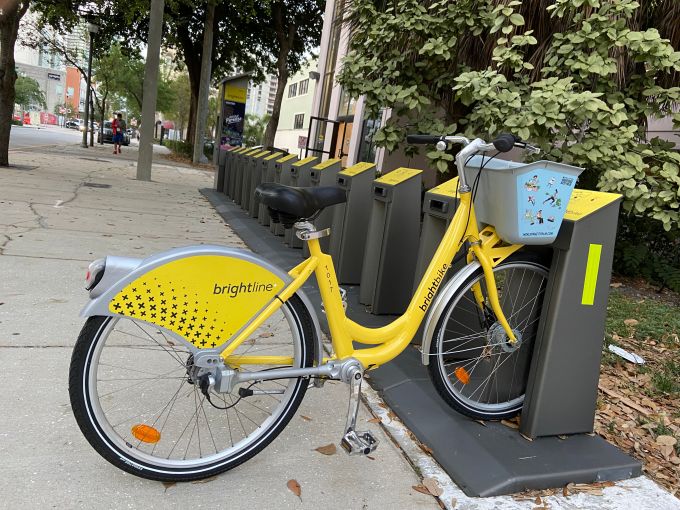 “It’s important to Brightline that we continue connecting commuters and leisure travelers with car-free transportation options like BrightBike,” Brightline President Patrick Goddard said in a statement.

The railroad rolled out yellow bicycles with baskets, bells and lights. The bike-sharing program is another attempt by Brightline to solve the “last mile” conundrum.

When Brightline introduced train service in 2018, it expected passengers would use Uber and Lyft to travel between stations and their final destinations. But Brightline soured on the level of service offered by ride-share drivers, and in 2021 it launched Brightline+, a fleet of Brightline-owned electric vehicles that take passengers to destinations within 5 miles of train stations.

“The experience is very inconsistent when you use rideshare,” Goddard told Commercial Observer last year. “We wanted to control that experience from door to door.”

Now Brightline is taking a more active role in micromobility via the bike-sharing program. Riders can reserve the three-speed bicycles using a QR code located at BrightBike docking stations and on the BrightBike app.

Users can take out and return bicycles at any time. A 30-minute rental costs $1, and the maximum daily rate is $48.

Brightline runs between Miami and West Palm Beach with a stop in Fort Lauderdale. While its passenger counts have remained far below the company’s own forecasts, it plans to expand service to Orlando International Airport this year.

BrightBike’s launch comes after another bike-sharing service, SkyBike, ended operations at the end of 2019. That program — which had 140 bikes at 17 docking stations in downtown West Palm Beach — had operated for more than four years.

While SkyBike underperformed expectations, West Palm Beach’s downtown has grown rapidly as a number of new luxury apartment towers have been added to the skyline in recent years.