Bank Branches, Once Retail Staple, Closing by the Hundreds

It wasn't the pandemic, either. 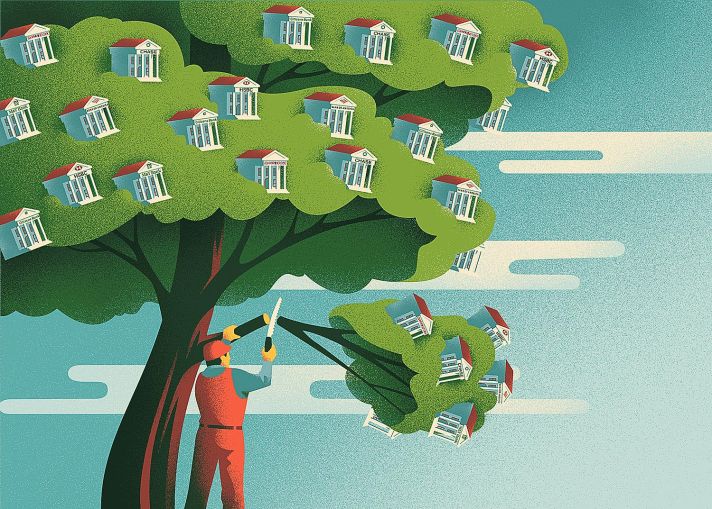 In the 1946 Christmas classic “It’s a Wonderful Life,” protagonist George Bailey envisions an alternate future where his family’s faithful small community bank Bailey Bros. Building & Loan Association, a symbol of by-your-bootstraps civic support, is shuttered due to a villain’s rapacity, robbing the small town of its financial pillar.

Thankfully, Bailey’s alarming alternate future didn’t look ahead another 75 or so years, or it’s likely his stately old bank would not only be historic. It would be redundant in a world of digital banking, consolidation and bank branch closures.

Once proud symbols of Main Street commerce, and, in recent decades, urban conveniences for busy professionals, never mind go-to space fillers for developers and landlords, the consumer bank branch is gradually becoming extinct, as relevant to today’s digital financial world as the pneumatic bank teller tube or traveler’s checks. A recent series of reports and analyses have found these branches, and the often valuable commercial real estate they occupy, simply aren’t as useful anymore to large national banks.

The result is that bank branches are closing by the hundreds, in some areas faster than others, with little certainty about what happens to the gaping space.

Roughly 1.5 million vacant square feet of bank space was on the market nationally in 2020, per a report from Ryan, a global tax, software and services firm. It’s an open question if, as retail and commercial space slowly recovers from the pandemic, there’s an investment strategy or adaptive reuse plan that can give these locations a second life. One 2021 study by N26 and Varo Bank, two fintech firms, predicted that all branches could close by 2034.

“There’s a surprising lack of information and data on how many branches banks really need right now,” said Jason Richardson, senior director of research at the National Community Reinvestment Coalition (NCRC), which recently released a report digging into bank branch trends and their impact on the financial future of communities. “We’ve seen a precipitous decline since the pandemic started, and I don’t know what a bottom looks like to this.”

The trends that have accelerated the shuttering of branch offices, namely industry consolidation and the digitization of personal finance, have existed for more than a decade, driven by post-Great Recession mergers and the emergence of smartphones. But they’ve recently gained significant momentum. The Federal Deposit Insurance Corporation’s most recent How America Banks survey found mobile banking as the main means of account access continues to increase, to 34 percent of banked households in 2019 from 9.5 percent in 2015. The share was arguably much more during the pandemic, overtaking online banking as the most popular primary method of consumer banking, and even remaining branches are largely converting to digitally focused centers for consultation and customer service, rather than routine transactions.

The NCRC found a full two-thirds of banking institutions have closed since the early 1980s, dropping to 5,000 in 2021 from 18,000 in 1984, and the pandemic hastened the demise of tellers and in-person transactions. From 2017 to 2021, 7,500 locations were lost, a precipitous rate that doubled in the COVID-19 era, impacting 201 branches a month. Certain cities were hit particularly hard; Portland, Oregon, lost 20 percent of its bank branches in that four-year period, with 14 percent of branches shut down in Hartford, Conn., and Baltimore.

At the same time, consolidation and the effectiveness of digital tools have seen bank deposits soar, efficiency increase significantly, and branch redundancy further encourage bankers to try and offload as many of their remaining physical locations as possible. It’s basic branch-level economics: lower margins and reduced fee opportunities necessitate occupancy cost reductions, and digital investments are where future bank profits lie anyway, according to an analysis by KBW, an investment bank specializing in financial services.

“Most branches are in retail-type locations, and that whole market got wiped out,” said Marc Hartley, a principal at Ryan. “The potential user of that space has a lot more options, and I don’t see any people really taking over these spaces in a concentrated way.”

Broadly speaking, branch locations in urban downtowns or core commercial districts tend to be valuable. When a lot of branches were built in the 1980s and 1990s, they followed specific demographic and psychographic analysis and data-driven location strategy, targeting high-end customers looking for wealth management and other more profitable services, according to Christian Beaudoin, JLL’s director of research and strategy in the central U.S. Despite net closures in the industry, banks are still holding on to these high-value locations, and, in the case of Capital One, actively expanding their retail footprint, even adding cafés and coworking spaces.

There have been a number of creative solutions for bank branch repurposing, Beaudoin said, especially by smaller, local businesses. He points to second lives as fast-casual restaurants and quick-service dining, even breweries and taprooms, especially in high-value neighborhoods. Near his Chicago office, he has seen former branches and cell phone stores turned into super-micro distribution centers for Getir, the Turkish 15-minute delivery app.

These new uses tend to be a better use of the space than its former use as a bank branch. But, for the most part, these are one-offs and don’t represent a wider strategy or real estate play to corner and reposition these assets. Gregory Gibney, a manager at Ryan, analyzed the industry and didn’t find any consistent reuse trends developed for divested bank branches (he expects to see marijuana dispensaries, which still operate on a cash basis and find value in repurposing vaults, to quickly move into these spaces). He’s seeing a lot of banks engage in sale-leaseback deals, selling the underlying branch real estate to lease it back from the new owner to keep their options open.

Complicating the matter, free-standing banks, especially those over 4,000 square feet, also cut a unique profile, which can frustrate efforts to repurpose. Ryan found this to be a clear cutoff. By analyzing CoStar and Real Capital Analytics data on bank branch sales from 2015 to 2020, Ryan researchers found the sub-4,000-square-foot branches were selling at an up to 7 percent premium from their 2015 values.

The impact that closed branches have on the wider neighborhood and real estate values is trickier to track. Generally, digitization has made many formerly in-person tasks easily replicable via an online application. Mortgage lending has become more automated and deposits can be done over the phone. Still, small businesses, especially those reliant on cash, continue to depend on bank branches for deposit services, said NCRC’s Richardson, and branches have a closer connection to small business lending in smaller towns, lower-income neighborhoods and rural areas. Low- to moderate-income minority neighborhoods, home to one-third of branches that closed in the last four years, have been hit harder by this phenomenon, and Richardson said it’s not uncommon for branches to be replaced by check cashing or payday loan locations.

“Is the physical location important? That’s hard to tell,” Richardson said. “We’ve seen foot traffic drop so much. They were formerly valuable as an anchor institution for shopping plazas, but makes you wonder if they really need a branch there.”

JLL’s Beaudoin agrees. Bank branch closures aren’t as impactful as one may think on the urban landscape, especially since foot traffic and occupancy never tend to be that high compared to other commercial spaces.

Perhaps in the aggregate, though, the slow fade of the in-person bank branch represents another example of brick-and-mortar retail struggling, or at least significantly shifting. Banks join the ranks of many commercial standbys facing existential crises, including gas stations and drug stores, especially at a time when walkable commercial real estate faces its own challenges bouncing back from the pandemic.

“We’re still in a period of challenge for urban retail,” Beaudoin said. “Especially because of the closures, and urban activity still isn’t back to where it was pre-COVID. We’re still at roughly 35 to 40 percent office occupancy [compared to] pre-COVID. There’s a direct correlation between that number and urban sales, but we see it increasing day by day, week by week.”

The future of bank branch spaces may depend in large part on how quickly that downtown vibrancy returns, an open question for commercial real estate brokers and investors. JLL forecasts office occupancy to hit 50 percent in the U.S. by sometime in late May or June, and continue to increase into the summer. Vacant branches ultimately will be valued, and reevaluated, based on consumer activity and neighborhood transactions, just not the ones that steer cash toward its own vaults.