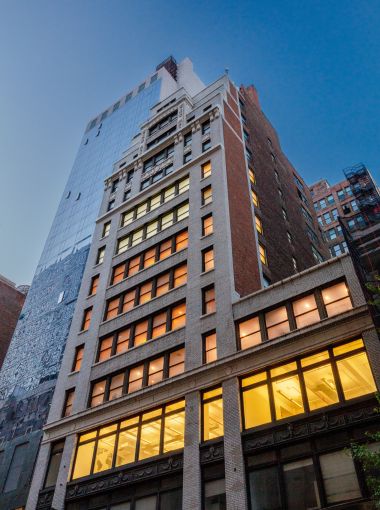 As the city continues to face a sluggish office leasing environment, one property owner in Midtown South is taking the plunge with an office condominium conversion.

Aron Rosenberg, the president of R&B Realty Group, has decided to convert his firm’s 16-story, 87,000-square-foot office property at 32 West 39th Street to commercial condos because the condo market is much stronger than the leasing market, said Michael Rudder of Rudder Property Group, who’s marketing the units.

“There’s an ocean’s worth of office space for lease, whereas there’s very few office condos,” Rudder said. “The demand far outweighs the number of units for sale. There’s less than five options in any size range. It’s not like a bunch of [condo] space has been dumped on the market during the pandemic.”

The units are modestly sized, ranging from 3,970 to 8,400 square feet, and priced from $900 to $1,050 per square foot. Asking prices for the full-floor condos in the building just south of Bryant Park range from $4.2 million to $8.4 million. Sales are expected to launch in the second quarter of 2022.

Rudder added that the pricing for the West 39th Street condo units was “a steep discount from where we would have priced it pre-COVID-19. I think our asking prices here would have been $1,250 a foot then,” he said. “We were closing sales at 20 West 33rd Street and 70 West 36th Street in 2019. Those are in less desirable locations, and they were $1,000 a square foot pre-COVID.”

Rudder explained that he plans to market the Midtown South condos to existing tenants in the building, as well as businesses that typically buy office condos, including medical practitioners, jewelers and garment manufacturers. Before the pandemic, R&B renovated the facade, lobby and elevators of 32 West 39th Street, as well as several floors of office space.

“We have a high level of conviction that this building will be a success and many other landlords will see this project and think about office condominium conversions as well,” said Rudder. “We think it will grow in popularity here.”

Rosenberg, who transitioned from running his family’s garment business to owning real estate in the Garment District and Midtown South, said in a statement that he has “always found it interesting there aren’t more office condos in New York City, and I am thrilled to help fill this void by offering full-floor units for sale at our excellent building on 39th and Fifth Avenue.”