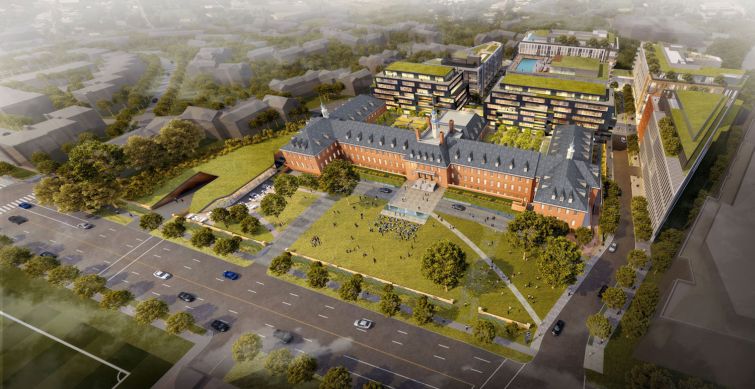 Cava Group is moving its headquarters to a new building in Washington, D.C.

The company behind the popular fast casual Mediterranean-inspired Cava Grill restaurants has inked a 10-year lease for approximately 20,000 square feet on the top floor of 14 Ridge Square, a mixed-use development in the District’s Upper Northwest.

The company has been at its current location at 702 H Street NW in Chinatown for five years, and will be moving sometime this summer, the  Washington Business Journal first reported.

It’s also nearby one of its own Cava locations at 4237 Wisconsin Avenue NW.

“Cava will be building the space out itself, catering to its specs,” Heiber said.

The redevelopment of 14 Ridge Square,  former headquarters of Fannie Mae, is being completed by Roadside Development and North America Sekisui House, and is part of a larger $275 million-plus City Ridge development that is slated to open this spring.

When completed, the development will include an 167,000-square-foot office property surrounded by approximately 1.1 million square feet of additional development, including 691 residential units and 155,000 square feet of retail anchored by D.C’s first Wegmans grocery store.

“As we reimagine the future of work, the new site will be an equally creative and convenient center for our teams,” Brett Schulman, Cava’s co-founder and CEO, told WBJ. “We are looking forward to being neighbors with the City Ridge community.”

Other tenants moving to City Ridge include International Baccalaureate, which is relocating from Bethesda, along with a 30,000-square-foot Equinox fitness club and a 14,000-square-foot KinderCare day care center.

The joint venture partners acquired the property in 2018 for $85 million.

The landlords were represented in-house and by Tranwestern’s George Vogelei in the lease.

Requests for comment from the landlord, Cava and Transwestern were not immediately returned.