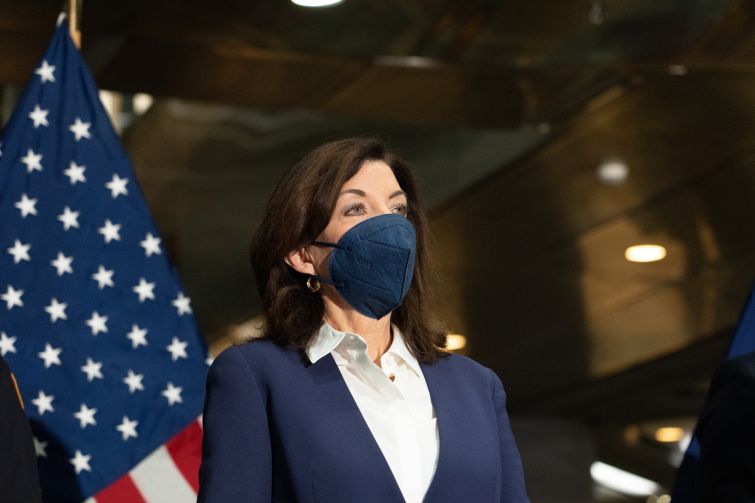 Governor Kathy Hochul at the Fulton Street station on Feb. 18, 2022. Photo: courtesy of the governor's office

The real estate industry and New Yorkers have something in common: Both groups want Kathy Hochul to remain governor.

Hochul had the support of 46 percent of Democrats statewide in the June 28 primary, a huge lead over fellow Democrats New York City Public Advocate Jumaane Williams with 17 percent and Long Island Congressman Tom Suozzi with 9 percent, according to the latest Siena College poll. She has held the lead in Siena polls in December 2021 and January 2022.

But about a quarter of the 803 registered Democrats polled from Feb. 14 to Feb. 17 were undecided as to who they will choose for the next governor.

“The official designee of the Democratic Party, Gov. Kathy Hochul remains the clear favorite among New York Democrats,” Siena College pollster Steven Greenberg said in a statement. “While Williams has a narrow 39 to 32 percent lead over Hochul with Black voters and he’s within 3 points of Hochul with younger voters, Hochul has a large to commanding lead with virtually all other demographic groups, with large double-digit leads in every region.”

Aside from showing Hochul’s continued support from New Yorkers, the Sienna poll also points out that New Yorkers were concerned about bail reform.

With 84 percent of every demographic polled feeling that crime is at “least a somewhat serious problem” (likely stymying the long-awaited return to office), 57 percent say they fear being the victim of a crime themselves, with two-thirds of residents statewide indicating that they feel the 2019 law ending cash bail should be amended to give judges more discretion as to who can walk free prior to conviction.

Suozzi said that he would resolve the issue if he makes it to the executive chamber.

“While Kathy Hochul stands by and refuses to fix bail reform, Tom Suozzi as governor will stand up to fix bail reform, protect our neighborhoods and address the root causes of crime so New Yorkers will feel safe again,” Kim Devlin, senior adviser to Suozzi said in a statement. “Hochul refuses to act, Suozzi will.”

Williams did not immediately respond to a request for comment.

The poll also shows that as criminal charges against Cuomo have been dropped in recent weeks, he has not won back the hearts and minds of New Yorkers with a 58 percent to 21 percent margin believing that he did sexually harass multiple women, according to Siena.

By a 47 percent to 27 percent margin, voters are siding with Attorney General Letitia James in her assertion that Cuomo is a “serial sexual harasser” over those claims the investigations were a political “hit job.” (These stats have remained unchanged since the last Siena poll in January.)