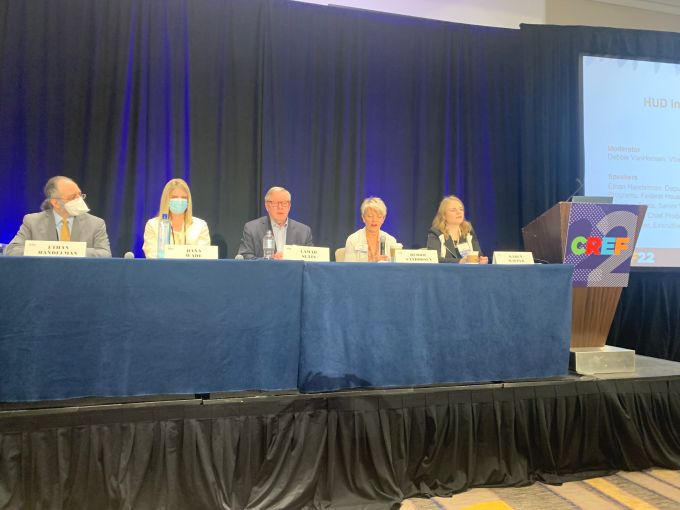 As demand for Federal Housing Administration multifamily lending continues to grow, staffing in the U.S. Department of Housing and Urban Development has not kept pace.

Ethan Handelman, deputy assistant secretary for HUD’s Office of Multifamily Housing, said at Monday’s Mortgage Bankers Association CREF conference in San Diego that the agency has been “essentially” operating at the same staffing levels for the past several years while confronting $32 billion of FHA commitments during fiscal year 2021.

“I think all of us have a shared goal of trying to make [the HUD staff] more effective and marshal the resources and marshal the policy changes to make the work of the department work better,” Handelman said during a breakout session panel “HUD Initiatives in the Multifamily Sector.”

Lamar Seats, senior vice president of FHA production at Greystone and a former HUD deputy assistant secretary in the Trump administration, stressed that part of the reason for the headcount struggles stems from the complicated process involved with hiring any government employee. He noted that when he joined HUD in May 2018, the agency’s staffing was down more than 200 people in multifamily housing alone with a number of senior positions left unfilled.

Handelman noted that HUD has made some improvements recently to try and streamline the hiring process, which has been a major focus within its office of the chief human capital officer. He said one of the big outstanding hires is the search for a new production director, which should be announced soon.

HUD has been working largely remotely since the COVID-19 pandemic took hold in March 2020 and Handleman said some elements of working from home may continue going forward. He said a full move back into HUD’s Washington, D.C. headquarters could happen in March, with staffers given a 30-day notice when such a move is planned.

While HUD is facing a competitive hiring climate, Handelman said the agency has some advantages over the private sector, given that some people have a commitment to work in public service.

“Folks who want to do public service, want to come in,” said Handelman, who prior to joining HUD under the Biden administration in February 2021 was a senior policy analyst at the Federal Housing Finance Agency. “Nothing substitutes for the desire to serve and it’s something that encourages me every day and it’s part of what makes everything run.”