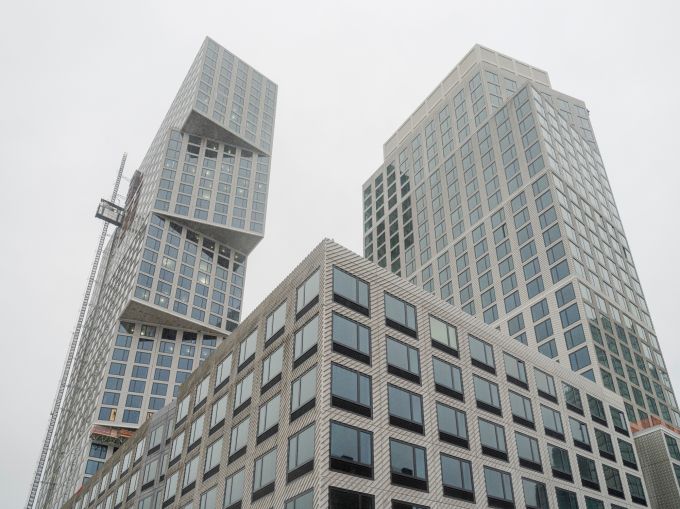 A two-tower luxury building designed by OMA is one piece of the larger Greenpoint Landing development under construction along the Greenpoint waterfront. Photo: Sasha Maslov/For Commercial Observer

Few outer-borough neighborhoods have mirrored Manhattan’s mercurial rise and fall in apartment rents during the pandemic quite like Greenpoint, a low-slung cluster of wood-frame houses, brick walk-ups and former factories along the East River waterfront in northern Brooklyn.

“One of the stories of this housing market is that in neighborhoods that have a fair amount of full-service newer buildings, we’re seeing much greater price growth in the upper half of the market rather than the lower half of the market,” said Jonathan Miller, the president and CEO of Miller Samuel and longtime residential market data analyst for brokerage Douglas Elliman.

He noted that the median rent in Brooklyn, as of December 2021, remained down 6.4 percent from 2019, because the cheaper half of the market had struggled more to maintain rents. Median asking rent in doorman buildings — essentially luxury rentals — across the borough in December 2021 was $3,877, up 6.2 percent from December 2019. Rent in non-doorman Brooklyn buildings, meanwhile, was 8.1 percent lower than two years earlier, at $2,600. All of this coincides with an 83 percent year-over-year decrease in rental inventory across the borough, per Miller’s latest market report.

The thousands of new apartments hitting the market in Greenpoint, combined with an overall contraction in rental inventory across the five boroughs, have created a perfect storm of expensive rents in Brooklyn’s northernmost neighborhood.

“Neighborhoods like Greenpoint are extremely tight, and, ahead of the pre-pandemic market, largely because of that new development,” Miller said. “It’s less about location and more about the change in the housing stock. That neighborhood as a result is seeing a disproportionate rise in rents.”

He noted that the more affordable half of the rental market has struggled because of how the pandemic has impacted service and retail workers in New York City during the pandemic.

“The lower-wage earners were punished much more severely than the balance of the economy and that’s reflected in the performance of the rental market,” Miller explained.

High-earning white-collar workers, meanwhile, have returned to the city and are looking for more space, ideally in full-service buildings with gyms and other amenities common in new construction buildings.

“The higher the wage, the greater the mobility of the potential tenant,” Miller said. “Right now, you’re seeing a tremendous amount of inbound migration into the city that didn’t exist in 2020.”

One of the biggest drivers of new development in the neighborhood is Greenpoint Landing, a sprawling, 22-acre megaproject that has transformed the formerly industrial northern edge. Led Park Tower Group, the project will include 5,500 apartments — 1,400 of which will be affordable — when it’s complete.

One and Two Blue Slip — buildings developed by Brookfield Properties — have opened in the past two years, with a total of 359 and 421 rentals, respectively. The first building in the project to be finished was 7 Bell Slip (aka 21 Commercial Street), a smaller, 93-unit affordable building that was completed in 2017. Over the past two years, 7 Bell has attracted two retail tenants — an upscale coffee shop called Eleva Coffee and a small grocery store, Riverside Market. Two more affordable buildings were also completed in 2017 — 33 Eagle Street and 5 Blue Slip — with 98 and 103 rentals, respectively.

Brookfield and Park Tower Group are also working on two stacked, angular towers at 227 West Street, which will rise 30 and 40 stories and include 745 rentals, 30 percent of which will be income-restricted. Rem Koolhaas’ OMA is the lead architect for the project between Eagle and West streets, along with Beyer Blinder Belle.

Finally, Park Tower is bringing in yet another developer, Rockefeller Group, to build out another Greenpoint Landing parcel at 16 Dupont Street. Set to start construction in May 2022, the 40-story building will have 380 rental units, 114 of which will be affordable.

But Greenpoint Landing is not the only game in town. The other high-profile stretch of development in the neighborhood is along West Street, where builders are slowly tearing down warehouses along the East River to put up luxury residential towers. Looming large on the waterfront is 21 India Street, dubbed “The Greenpoint,” by developer Mack Enterprises. Completed in 2019, the 40-story tower has 368 apartments — 95 condominium units and 273 rentals — with the cheapest studios asking $2,700 a month to lease and $750,000 to purchase.

Next door, by the ferry stop, Lendlease is working on a 14-story, 500-unit building at 1 Java Street, for which it paid $111 million in an all-cash deal in October 2020. Farther south, where West Street dead ends into Quay Street, a few developers are seeking rezonings to replace aging warehouses with apartments. Harry Einhorn hopes to build 83 apartments — 25 of which would be affordable — at 79 Quay Street.

Gotham Organization plans to tear down the Metropolitan Transportation Authority wash station at 40 Quay Street to build 900 apartments, 25 percent of which would be affordable, along with 100,000 square feet of retail and commercial space. The development will also include a new museum devoted to the USS Monitor, a steampowered Civil War-era battleship, and a new facility for New York City Transit’s Emergency Response Unit.

And it’s not only the residential market in Greenpoint that’s fostering astronomical prices. The neighborhood’s sizable industrial zone — which bleeds into East Williamsburg — has become a hot market for last-mile shipping operations. New Jersey-based warehouse developer Sitex Group just paid $30 million for a 98,000-square-foot site at 360 Kingsland Avenue, as Commercial Observer reported last month, and CenterPoint Properties picked up 301 Norman Avenue next door for $38 million the month before.

“I don’t see it slowing down any time soon,” said Daniel Lebor, a partner at TerraCRG who oversees the brokerage’s investment sales team. “There’s very few parcels of land with space for fleet management and parking. The demand for these sites for distribution is really strong.”

Greenpoint is also home to one of the largest industrial adaptive reuse projects currently underway in Brooklyn — the expansion of the Acme Smoked Fish factory at 30 Gem Street. Rubenstein Partners is developing the $500 million project, which will include a new, 95,000-square-foot fish smoking and packing facility for Acme and a nine-story office and retail property spanning 455,000 square feet.

Lebor said that investors are looking more closely at small industrial and commercial properties as well, both in Greenpoint and in other parts of Brooklyn, after a long hiatus for commercial development during the pandemic.

“Coming into 2022, we’re seeing renewed interest in the right commercial sites in the right neighborhoods at the right price points,” he said. “We’re marketing a couple of projects in the Navy Yard and Red Hook that before COVID weren’t seeing the demand we’d hoped for.”

Smaller investors are once again looking for buildings that could become “neighborhood offices that provide good-sized spaces for smaller companies,” he added, pointing to a former tomato warehouse at 29 Meserole Avenue as an example. The relatively small 18,320-square-foot property sold for $8 million last year and may become offices or retail, according to the broker.