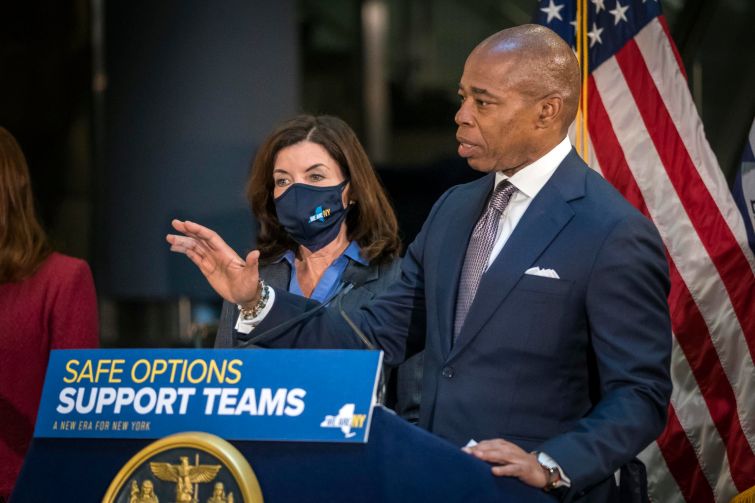 An increase in subway crimes has helped stymie the long-awaited return to office in New York City, and Mayor Eric Adams and Gov. Kathy Hochul released a plan on Friday to make public transportation safer.

Adams, Hochul and Metropolitan Transportation Authority Chair Janno Lieber announced the effort that would include increasing police presence in the subways, improving services for people experiencing homelessness and cracking down on those laying on subway seats, using drugs and littering on train cars.

“It is counterintuitive for someone to say, ‘I’m called back to my job, I can’t stay at home working over Zoom anymore. It’s time to come back.’ At the same time they’re seeing headlines and stories about individuals, Asian women who go down into the subway and literally have their back against the wall because of the very real fear that something could happen to them,” Hochul said during the press conference.

Hochul said the main goal would be to bring subway ridership back to pre-pandemic levels of about 5 million to 6 million riders per day and give workers fewer excuses about transit conditions to work from home.

Adams and Hochul said they will launch a series of programs next week, including more policing and improved services for homeless people, in order to send a message that the trains are not for living, they’re for commuting.

“The system is not made to be housing, it’s made to be transportation and we have to return back to that basic philosophy,” Adams said. “If someone is in physical emotional distress, we can’t leave them on the train for their own safety and the safety of others. That’s a betrayal. We must intervene and get help.”

If the pandemic taught the Hochul administration anything, it was how to expand the availability of medical care options through the surge and flex program for hospitals. Now she hopes to adopt the same mentality for mental illness by increasing the 600 psychiatric beds available in the city.

New York Police Department Commissioner Keechant Sewell said officers would begin by canvassing sections of the A, E, 1, N and R lines and 1,000 additional officers have already been deployed. Hochul said her office would push to include a $10 billion plan to hire more health care workers, such as psychiatrists and psychiatric nurses, in the proposed executive budget by using those funds to pay off their student loans.

She added that $28 billion will be allocated for psychiatric facilities and 500 supportive housing beds provided by community organizations, according to the administration.

The return to office has been a key talking point for Hochul since November 2021, and she has repeated it at events with business leaders. Adams echoed her sentiments and urged CEOs of major companies to end work-from-home policies and bring workers back.

Lieber, a former executive at Silverstein Properties, said ridership has recovered by 50 percent since the low of the omicron surge and that progress must be protected for the good of the economy.

“The NYPD is an amazing partner for us to handle the policing of the entire subway system and now with the city’s promise, the mayor’s promise to step up enforcement of that MTA code of conduct,” Lieber said. “But that enforcement commitment is a game changer. Making sure that we have a safe system is key to winning riders back.”

Adams did not hold back on Friday in pointing out the failure of the de Blasio administration in providing housing options and bringing unhoused New Yorkers and those experiencing mental health crises out of the transit system.

Former Mayor Bill de Blasio, in contrast with the Adams administration, notoriously butted heads with MTA leadership over policing. Calls by former NYC Transit President Sarah Feinberg for more officers went largely ignored throughout 2020 and 2021, or were fraught with only occasional surges of NYPD cops into the system over the course of the pandemic when crime in the system began to spike.