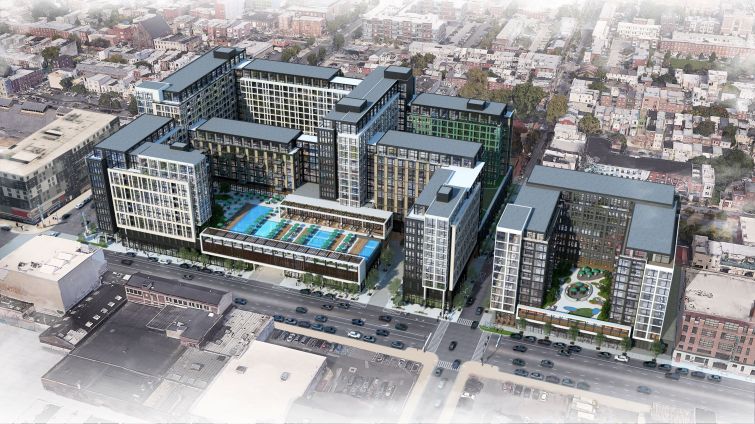 A rendering of Broad and Washington. Rendering: Post Brothers

The largest residential development in the U.S. — one that’s been decades in the making — is officially ready to rise.

Post Brothers and Tower Investments have closed $400 million in financing for their 1.9 million-square-foot mixed-use project at Broad Street and Washington Avenue in Philadelphia, Commercial Observer has learned, and have now broken ground on the mega-development.

Bank OZK and Starwood Property Trust provided the debt, with the lenders providing $250 million and $110 million in senior and mezzanine financing respectively, and the remaining $40 million being invested by sponsorship.

The development — called Broad and Washington for now — will be constructed over several phases, with Bank OZK and Starwood’s loan funding the first phase.

Ackman-Ziff’s Russell Schildkraut and Christine Zivkovic negotiated the financing, which acts as a construction and project recapitalization loan.

When completed in 2026, the $750 million project will span 1.9 million square feet and include 1,457 apartments, more than 65,000 square feet of retail space on the ground floor, and a parking garage. The first phase —scheduled for completion in 2024 — will see the building of 600 apartments across four interconnected structures plus 50,000 square feet of ground-floor commercial space.

Broad and Washington, at 1001 South Broad Street in South Philadelphia, nicknamed South Philly, is the largest project in the U.S. to be built to date using prefabricated load-bearing wall panels, allowing the developers to save 25 percent on hard costs versus traditional concrete and steel construction while producing Class A housing.

Bart Blatstein, founder and CEO of Tower Investments and a native Philadelphian, has long proposed a residential complex at the site, and now, with Post Brothers as a joint-venture development partner, construction is finally underway. Post Brothers and Tower Investment’s plans for a 15-story structure were approved by Philadelphia’s Department of Licenses and Inspections in August 2021, per the Philly Voice.

Bank OZK and Starwood have previously provided construction financing within the Post Brothers’ portfolio, for projects including The Atlantic, Presidential City and Piazza Alta.

“Lot of lenders were interested [in the financing],” Matt Pestronk, co-founder of Post Brothers, told CO. “We had transacted with both of these lenders multiple times. It’s a big project, especially for outside New York City where there are more projects of this size being built. We found there was a lot of competition for the deal, but we ultimately went with lenders we were comfortable with.”

Due to the size and complexity of the project “a capital stack was required that included the most sophisticated capital providers in the marketplace today,” Schildkraut said. “All parties including the sponsor, senior and subordinate lenders, their legal and closing teams, and Ackman-Ziff worked cohesively to effectuate this transformative project.“

And it wasn’t an overnight accomplishment, by any means.

Pestronk joked that the deal came together in “three weeks,” but in actuality it was more than four years in the making. Post Brothers had a long relationship with Blatstein, and the site was already on the firm’s radar, even before it entered the Broad and Washington partnership in 2017.

“The site was something lots of people were very aware of for a long time,” Pestronk said. “Every person in development in Philadelphia, and in the northeast, was aware of the site and its prominence.”

Ultimately, getting to the construction stage required patience, plus the ability to work closely with the community and the City Planning Commission in order to get their full backing, Pestronk said.

“It took the project four years to come together from when we first shook hands with Bart on it,” he said. The site had sat vacant for four decades at the time. At one point, the city of Philadelphia owned it and implemented restrictions around what could be built, meaning there were various zoning complications to surmount.

But now, the developers are ready to roll.

“The anticipation of the transformative nature has been extensively discussed in the civic and development domain, and the execution of the project itself will greatly exceed all expectations,” Pestronk said. “The project is now financed to go forward and we are excited to deliver what people have been waiting to see.

Post Brothers also teamed up with Blatstein in the past, on the expansion of the Piazza Alta apartments in Philly’s Northern Liberties neighborhood.

“It’s an honor to work with Post Brothers in developing such a monumental community in our own backyard that will not only set a record for mixed-use housing in Philadelphia, but also the entire country,” Blatstein said. “Post Brothers is known for offering the most exceptional apartment living in only the most desirable neighborhoods, and the Broad and Washington development will set a new national standard.”

BKV Group is the project’s architect while Post General Contracting Is the general contractor.