Ghost kitchens? Medical hubs? Dog parks? LA has long since paved paradise, but the pandemic has many mulling new ways to use parking spaces 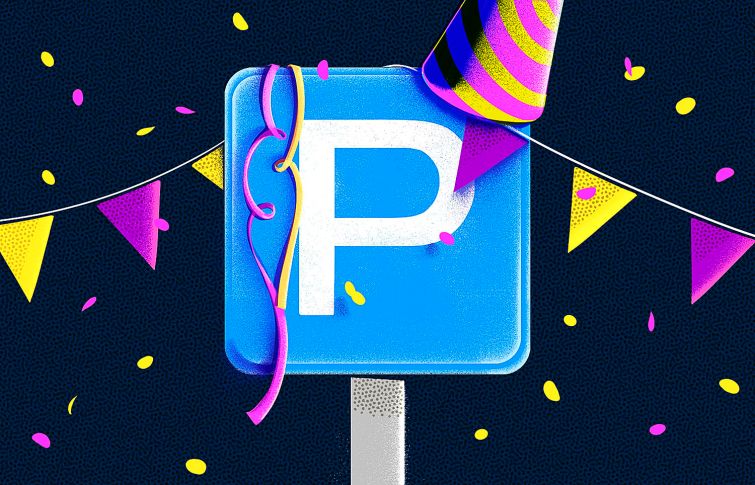 Of all the unexpected moments that came during the early days of the pandemic, the halt in traffic and emptying out of streets throughout Los Angeles created something both surreal and thought-provoking. Beyond the wonder of actually using the highways as intended — to quickly circumvent the sprawling city — it underscored just how much value, and space, the city allocates towards storing parked cars. Researchers have famously claimed the city has more space for cars than it does for people.

“The pandemic gave everyone this very vivid illustration of how much space, even in very vibrant parts of their area, is devoted to surface parking,” said Michael Manville, an associate professor of urban planning at the University of California, Los Angeles, who has written extensively about the damage parking has caused to cities. “It helped them understand more than any other sort of medium could just how much of this scarce resource of urban land is devoted to holding empty cars.”

Parking has long defined Los Angeles’ sprawling layout and streetscape. And while the vast swaths of space and concrete grids aren’t disappearing anytime soon, an increasing number of developers and startups see opportunity amid the asphalt.

The city’s adaptive reuse ordinance has catalyzed conversions. Restaurants have thrived with pandemic-era programs to swap parking for expanded outdoor seating, which Mayor Eric Garcetti has extended through June 30. State Assemblymember Laura Friedman proposed a bill to cut parking minimums for affordable housing that made significant headway in the legislature before being defeated. And emerging business models and technology, from electric vehicle charging stations to ghost kitchens, have made the humble parking stall, a mere 300 square feet, more useful, and more contested, space.

“Less than 1 percent of real estate’s budget was invested in [research and development]  and technology,” said Nikhil Bharadwaj, co-founder and chief technology officer of Xeal, a company that focuses on partnering with real estate developers to install electric chargers. “Now we’re seeing a shift, where all these assets, including parking, are seen as ways to upgrade.”

A series of high-profile redevelopments of parking garages has also added momentum to a shift toward revaluing and rethinking the parking paradigm. In downtown L.A., where adaptive reuse and residential construction has boomed in recent years — a city ordinance allows builders to get properties to market quicker, and does not require them to add net new parking — Markwood’s 9th & Hill turned the historic May Company Garage into a high-end office building with a location of the ultra-high-end grocery chain Erehwon. In Santa Monica, the city is pushing to transform a downtown parking structure into up to 150 units of affordable housing, a plan that has drawn unexpectedly fierce local sentiment in favor of protecting the outdated concrete structure.

City stats on L.A. Al Fresco suggest there was appetite for change. The outdoor dining initiative wasn’t simply an escape valve for businesses during the pandemic, though a recent survey found 81 percent of participants believed they “would have permanently closed without the outdoor dining.”

According to Colin Sweeney, a spokesperson for the Los Angeles Department of Transportation, which ran the program, 2,777 individual businesses participated, with nearly 2,000 utilizing their parking lots and nearly 1,700 taking advantage of sidewalk dining (restaurants could use both). While the city doesn’t have data on the parking meter revenue lost from the program, or the economic impact of the program, feedback has been “overwhelmingly positive,” said Sweeney, and the city has already done research around what changes would need to be made to the municipal code to make this program permanent.

“A year before COVID happens, do you think there was any conceivable situation where the City Council would roll back parking requirements for a huge swath of businesses?” said UCLA’s Manville. “Even as the emergency was waning, they renewed it, suggesting elected officials and those they’re hearing from recognize there’s a value for this space other than using it for parking. The bar is low, but even that kind of progress would have been hard to imagine.”

This outdoor dining push allowed regulations that would have taken decades to pass to instead come to fruition in months, said Eddie Navarrette, founder of FE Design & Consulting and a longtime industry expert, consultant and advocate. The al fresco policy offers a more sustainable future for restaurants, he said, if the City Council makes it permanent.

“Every month that goes by, every time coronavirus dies down, there’s less of an opportunity we have to pass this policy,” he said. “We’ll just go back to normal.”

At the same time new seating programs for restaurants and safe street programs have gotten Angelenos to rethink street parking, new business models and technology have created new opportunities for turning parking garages into multifaceted businesses. Bharadwaj of Xeal, the electric vehicle charger startup, has seen a nationwide uptick in electrification initiatives and ordinances pushing developers to increasingly plug in and make their projects “gas stations of the future.”

The Los Angeles Department of Water and Power, the city’s water and electric utility, has a Commercial EV Charging Station Rebate Program, and Bharadwaj said he’s seen a shift towards more public charging, with over 2 million EV drivers in Los Angeles. Some prominent property owners, such as Catalyst Group, which is electrifying 11 percent of its parking spaces, and the Grove shopping and entertainment center, owned by Caruso, see investment in EV charging as a way to demonstrate leadership and attract higher-income EV owners.

“One of the big challenges is real estate owners believe they want to wait for their users to buy electric cars,” Bharadwaj said. “We’ve found it works the other way around. The electric drivers are coming. Once you invest in electric power, it’ll support your building and future residents as well. It’s a tenant retainment tool.”

The charging industry takes advantage of the fact that the best parking garages and lots offer proximity to stores and workplaces, providing a reason to stop and charge. That proximity, and the propensity for parking to be designed for overcapacity, means parking lots and garages offer opportunities for other businesses looking to connect with city dwellers.

REEF, a startup which has built a business out of managing and converting parking spaces into ghost kitchens, last-mile delivery hubs and even mobile medical clinics, believes there’s significant upside to parking operators leasing part of all of their assets to new businesses. The firm operates a handful of sites in Los Angeles, including a REEF Park in Santa Monica that turned a parking area into a dog park, outdoor bar and delivery-only kitchen that uses couriers on electric bikes. With deals to open hundreds of food prep locations worldwide for both established players like Wendy’s and delivery-only chains like 800 Degrees Pizza, REEF claims it’s the fastest-growing restaurant operator in the world.

“Parking offers proximity to customers, and as time goes on, density creates a higher value,” said Tommy Rosen, REEF’s chief development officer. “With the increasing value of industrial real estate, which can be scarce and zoned for certain areas, repurposing a parking garage for other industrial uses is much more relevant and valuable than using it to simply park cars.”

In effect, Rosen and others argue that parking, rather than a temporary destination, is a long-term infill opportunity in a more populous, dense downtown. The character of car-centric Los Angeles isn’t changing overnight, but there are many forces slowly chipping away at the wall. Reformists, including state Sen. Scott Wiener and his allies statewide and in L.A., continue to push laws around zoning, parking minimums and transit-oriented development, which may not pass, but continue to pick up more support as the state and the city’s housing crises continue (L.A. County is short half a million affordable units, according to the nonprofit California Housing Partnership Corporation).

The pandemic by itself hasn’t completely transformed Los Angeles and its relationship with parking spaces and garages; a new set of automated parking garages with robotic shuttles is being built across the city by a company called Park Plus, and a parking lot near the Crypto.com Arena downtown will soon be redeveloped, just with more parking. But the last few years did provide brief glimpses of a future where car-centric infrastructure is reimagined and redeveloped, which may be enough to catalyze a significant real estate shift.

“On some ideal level, we missed an opportunity,” Manville from UCLA said. “Given the way L.A. is run, we’re sort of lucky we lurched around at all.”