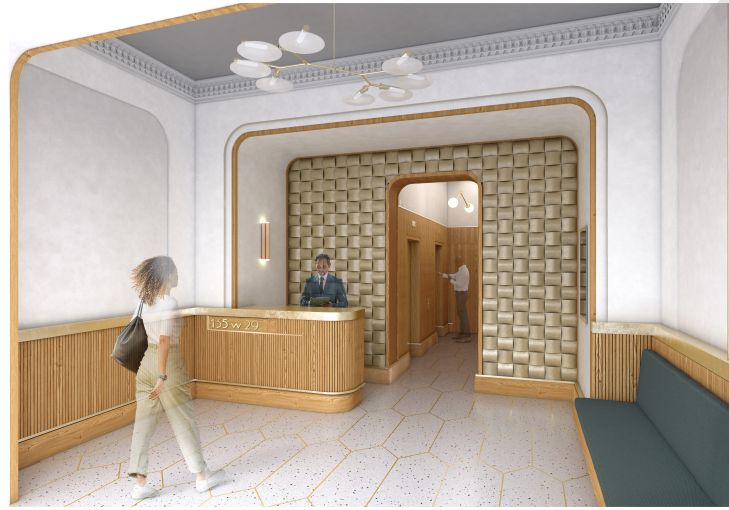 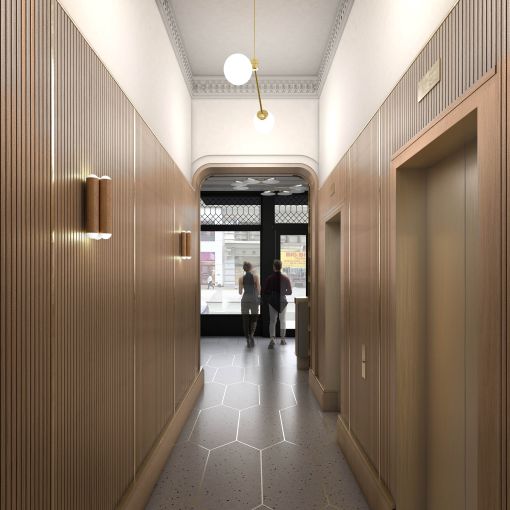 When the Kaufman Organization ground-leased the Haymarket Building in Chelsea for $35 million last March, it decided to put a midcentury modern spin on the 110-year-old loft building.

The 12-story office property, located at 135 West 29th Street between Seventh and Eighth avenues, is getting a significant upgrade that includes new mechanical systems, a new lobby, and an updated ground-floor facade.

The new lobby, designed by NV Design Architecture, is meant to have a “resi-mercial sort of modern look,” said Grant Greenspan, a principal of the Kaufman Organization. “We’re trying to warm up the environment and eliminate the cold stone,” he added, referring to the previous marble walls and shiny black stone on the lower part of the first-floor facade.

The upgraded lobby will have waist-high blonde wood paneling, topped with a gold-painted accent, both of which extend into a reception desk next to the elevator lobby. A wall resembling pleated golden metallic strips separates the two spaces, followed by more light wooden paneling around the elevators and in the elevator cabs.

Kaufman decided to recapture roughly 150 square feet of retail space to expand the lobby. Greenspan said the team plans to use that extra space for a new seating area for guests who need to wait in the lobby. The ground-floor facade, which is a hodgepodge of roll-down gates and storefronts of varying sizes, is being reclad with a large, glassed storefront and dark metal accent paneling. The current shiny, black paneling on the exterior is also being removed, in favor of white stone that more closely matches the existing limestone on the facade.

Monthly asking rents in the building range from the high $50s to the low $60s per square foot. Work begins this month, and is expected to finish in the second quarter of 2022.