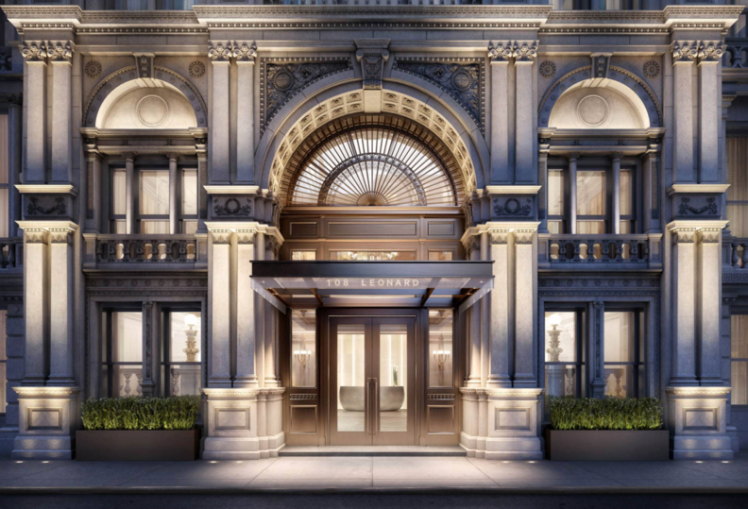 The Peebles Corporation and El Ad Group have landed a $229.4 million refinance for 108 Leonard Street, the developers’ luxury condominium building in Tribeca, Commercial Observer has learned.

J.P. Morgan provided a $184 million senior loan in the deal, while Lionheart Strategic Management was in the $45 million mezzanine spot, sources said.

In 2019, Mack Real Estate Credit Strategies provided a $450 million condo inventory loan for the asset, as reported by The Real Deal. The W&D team also arranged that financing.

Designed by architects Stephen D. Hatch and McKim, Mead, and White, the Beaux-Arts-style building — which has an alternate address of 346 Broadway — was erected in 1894 and previously served as the headquarters of New York Life Insurance, then New York Criminal Court.

Don Peebles’ Peebles Corporation acquired the asset — the single largest building ever sold by the City of New York at the time — for $160 million in December 2013, beginning the condo conversion project with partner El Ad in 2016 and restoring the National Register of Historic Places-listed building to its former glory.

Sales at the project launched in early 2019 and have been off to the races, with some high-profile buyers garnering headlines since.

According to the New York Post, those buyers include Zoe Jackson, producer of “Project Runway” and “Top Chef”, who paid $6.4 million for a unit at the building; Keith Urban and Nicole Kidman, who grabbed a two-bedroom apartment for $3.5 million; and billionaire Gildo Pallanca Pastor, who took the cherry on the cake and snapped up the 2,618-square-foot penthouse for $8.7 million in December 2021.