The mayor, local politicians and neighborhood groups are all fighting over whether to repair or tear down the aging BQE in Brooklyn Heights. 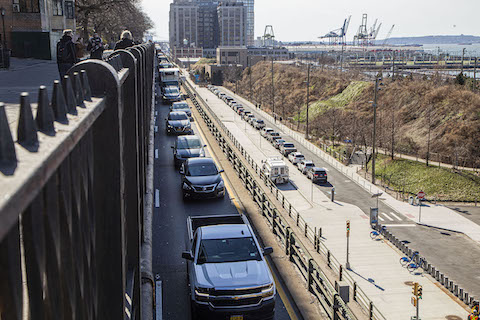 The BQE triple cantilever in Brooklyn Heights will no longer meet minimum safety requirements in the next five years and needs immediate repairs. The city is talking about whether to replace it or tear it down. Photo: Julia Cherrault/For Commercial Observer

When the city unveiled its plan to reconstruct the Brooklyn Heights section of the Brooklyn-Queens Expressway in 2018, neighbors were enraged.

The New York City Department of Transportation (DOT) wanted not only to dump more trucks onto their residential streets, but also to shut down and temporarily dismantle the beloved Brooklyn Heights Promenade.

Constructed by “master planner” Robert Moses in the 1950s, the BQE runs from the Verrazzano Bridge in Bay Ridge, Brooklyn, to the Triborough Bridge in Astoria, Queens, dividing a series of neighborhoods along the East River on a path that includes both elevated highways and below-grade trenches. The interstate highway is one of the most heavily traveled routes in New York City, carrying an average of 153,000 vehicles a day and up to 1,100 trucks per hour during weekday mornings. The half-mile-long Brooklyn Heights section consists of a triple cantilever — a series of three decks that extend outward from the hillside for which the Heights is named, overlooking the East River and Brooklyn Bridge Park. The top deck includes the Promenade, which stretches 1,825 feet from Atlantic Avenue to just south of the Brooklyn Bridge. Since the promenade is structurally integrated into the cantilever, rebuilding the highway will inevitably affect the future of the public space, which has legally protected sight lines of the river.

As the BQE approaches 80 years old, the city has to decide what to do with the triple cantilever. DOT recently determined that, within five years, the cantilever will become structurally unsound and unable to carry the current amount of traffic. The agency is mulling whether it should be repaired in stages, rebuilt completely or torn down and converted to an entirely different road shape, like a trench or a tunnel.

“This is the most challenging project not only in New York City but arguably in the United States right now,” said Transportation Commissioner Polly Trottenberg during a contentious September 2018 meeting in Brooklyn Heights. “Dealing with the BQE is Hobbesian. If I could roll it back 70 years, I wouldn’t build a highway and put a playground and a park on top of it and all the other absurd things that were done with this highway.”

DOT’s two original plans, unveiled in 2018, involved constructing a temporary elevated roadway while rebuilding the cantilever, or revamping the BQE in a lane-by-lane approach.

The temporary elevated roadway proposal would involve demolishing the Brooklyn Heights Promenade and building a multi-level, six-lane highway in its place. A new foundation and concrete supports would be laid down on Furman Street to support the new cantilever structure, and a new, wider promenade would be built when the work is finished. The process would take six years and cost upwards of $4 billion. Transportation officials preferred this option because they felt it would take less time and be less cost intensive.

But Brooklyn Heights’ neighbors, as well as local groups like the Brooklyn Heights Association, were fiercely opposed to this option, arguing that it would take away valuable public space and may violate laws created to protect the sight lines from the promenade. (There was unabashed heckling at the public meeting where this plan was unveiled.)

Plan B would entail rebuilding the BQE lane by lane while leaving the promenade intact over the course of eight years. It would involve 24 weekends of full lane closures and more than four-and-a half years of overnight lane closures. DOT believes that it could cost as much as $4 billion.

A handful of local groups and elected officials have advanced their own proposals for the reconstruction of the BQE, including the Brooklyn Heights Association, architecture firm Bjarke Ingels Group and City Comptroller Scott Stringer. City Council Speaker Corey Johnson has even called for tearing down that section of the BQE. The City Council also released a report today from engineering firm Arup. It advocated for the plans developed by BIG, which wanted to cap the highway with a section of Brooklyn Bridge Park, and the Brooklyn Heights Association, which called for constructing a temporary highway next door while DOT works on replacing the triple cantilever. The Council’s report also explored the possibility of demolishing the cantilever and boring a new highway tunnel underneath Brooklyn Heights, which would cost as much as $11 billion.

The panel’s January 30 report recommended that DOT begin immediate repairs on the cantilever and the entire 1.5-mile-long stretch of the BQE between Atlantic Avenue and Sands Street. Damage to the structure is severe, the panel noted, putting drivers at risk within the next decade and forcing neighbors to live with vibrations from trucks driving across the roadway.

“Looking at the BQE today, the signs of its deterioration are obvious — spalling concrete, deteriorated joints, exposed rebar in the retaining walls and wood shoring are all signs of a structure in distress,” the report’s authors wrote.

While the panel did not recommend a specific plan to fix the aging highway, it did propose reducing the number of traffic lanes on the cantilever from three lanes to two in each direction. The move would prolong the life of the structure and create a shoulder lane for motorists to pull off in the event of a breakdown or accident. This section of the BQE has significantly higher-than-average rates of car crashes because there is no shoulder on the cantilever, per the report, and such crashes often involve injuries and multiple lanes of traffic blocked for extended periods of time.

The mayor was not enthusiastic about this suggestion. WNYC host Brian Lehrer asked de Blasio about nixing a lane during an interview conducted Jan. 31, the day after the panel released its report.

“The problem I have with that is … that’s not a guarantee that people get out of the cars,” the mayor replied. “It is a guarantee of traffic jams and it is a guarantee of other challenges.” He added that while he would consider axing a lane if it would save the BQE, he didn’t want to shift more traffic onto local streets in Brooklyn. (The Mayor’s press office didn’t return a request for comment by press time.)

After the panel released its report last month, Mayor de Blasio did implement some of its recommendations. He ordered the city to undertake emergency repairs on the cantilever and to ban heavy trucks from the roadway for the foreseeable future.

However, the de Blasio administration hasn’t made a peep about the panel’s boldest recommendation — that the city should lead a holistic planning process that considers the entire BQE. Many sections of the elevated highway will need to be rebuilt in the next decade or two, including the Gowanus Expressway, and they argue that the city should consider the BQE as one large project rather than several smaller ones. A new plan could consider opportunities for public transit, pedestrian and bike access around the highway, new parks and public green spaces, and ways to knit together the neighborhoods that were divided long ago by Moses’ highway construction, the report argues.

“Developing and implementing this corridor vision will also take time — planning and design work, stakeholder outreach and environmental review could potentially take a decade, and construction will take another decade,” the panel wrote. “That is why it is imperative to bring together the stakeholders to begin work on this now, while immediate repairs are being undertaken.”

Building Congress chief Carlo Scissura, who led the panel’s efforts, said that the city must commit to “creat[ing] a unified corridor plan from the Verrazzano Bridge to Queens. Each piece of this roadway needs to be rebuilt. We’re calling for one grand rebuilding of it. [A plan] ties communities together, it opens up the waterfront. It creates one road as opposed to a hodgepodge of roads that were created over the last 50, 60 years.”

Another panelist, Elizabeth Goldstein of the Municipal Arts Society, said that she was “a little bit disappointed that there doesn’t seem to be a better understanding of the interconnectivity of the [panel’s] recommendations. If you do the immediate repairs and don’t do the long-term plan, you end up with the same problem in a decade.”

Goldstein and Scissura emphasized that there needs to be an interagency, intergovernmental body that can spearhead the highway reconstruction and push through a more comprehensive plan.

Lisa Birnback, the executive director of the Brooklyn Heights Association, a nonprofit neighborhood activist group, said that her organization was very supportive of reducing traffic lanes and undertaking a larger planning process for the entire BQE.

“This elevated highway system is outdated and problematic, not just in Brooklyn but in other parts of the city, in the Bronx,” she explained. “This entire corridor is in disrepair. It doesn’t make sense to repair pieces of the highway bit by bit as they collapse.”