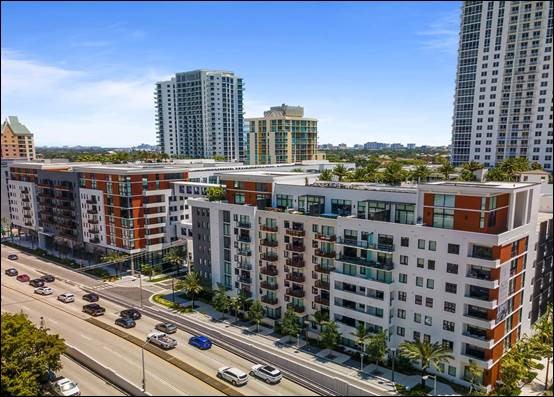 The financing facilitated Cardone Capital’s purchase of Las Olas Walk and Four West Las Olas, two properties that are located less than a mile from each other — at 106 South Federal Highway and 4 West Las Olas Boulevard #126, respectively — in the center of downtown Fort Lauderdale.

Cardone bought Las Olas Walk from developer ZOM Living with $174 million in financing and Four West Las Olas from NCC Development and Elevate Partners with $103.5 million in debt, according to information from Square Mile.

Both assets were recently included as part of a $744 million, four-property multifamily portfolio purchase, as CO previously reported. Cardone — a prominent social media figure, investor, motivational speaker and author of “The 10X Rule” — raised $220 million through his investment platform to buy the four properties. The platform raises money in a crowdfunding format from accredited and interested non-accredited investors, who then become partners in the real estate assets he purchases through various fund vehicles.

Cardone was looking to amass $75 million for Las Olas Walk, with minimum investment contributions starting at $1,000, according to an offering memorandum that was circulated in late October.

Both assets will be rebranded under the 10X Living flag, a name that pays homage to his brand, the 10X Rule, which is a philosophy detailed in his self-help book on entrepreneurship that revolves around success stemming “from working 10 times harder than anyone else and displaying a ‘domination mentality.’”

“The growth that has occurred in the multifamily sector in South Florida, and particularly Fort Lauderdale, has been extraordinarily impressive over the past year,” said Square Mile Principal Eric Cohen. “We have sought out investing into the newest and highest-quality product in the market that should continue to benefit from this momentum. Cardone Capital has amassed an impressive portfolio in this market and we expect them to continue to enhance performance further at these already terrific core assets.”

Newmark’s Purvesh Gosalia spearheaded the arrangement of the financing.

The two properties are situated in a bustling area in downtown Fort Lauderdale, which sports more than 10 million square feet of office space, as well as a healthy mix of retail and dining, according to Square Mile.

Las Olas Walk also includes studios, one-, two- and three-bedroom layouts. They range in size from more than 500 square feet to about 2,500 square feet, per listing information from Apartments.com. Monthly rents were not immediately available.

Cardone Capital could not be reached.
Mack Burke can be reached at mburke@commercialobserver.com.