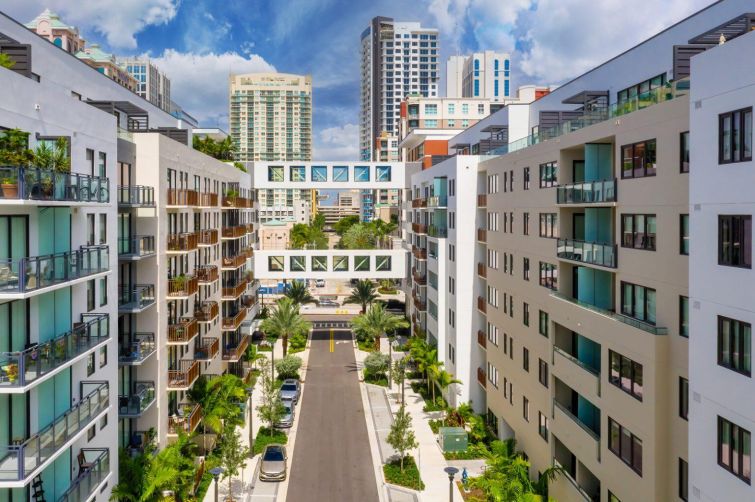 Social media star and “The 10X Rule” author Grant Cardone has amassed quite the real estate empire in South Florida through his company Cardone Capital.

Now Cardone is adding to that big time as Cardone Capital is acquiring another four apartment complexes in Broward County for $744 million. The portfolio includes 1,688 apartments, which works out to roughly $441,000 per unit.

Two properties are located in Fort Lauderdale, including the 456-unit Las Olas Walk, which was completed by ZOM Living earlier this year, and the remaining two are in Sunrise and Weston, the South Florida Business Journal first reported.

Two more properties, the 586-unit San Michele Collection in Weston and 387-unit Colonnade Residences in Sunrise, sold for a combined $355 million, according to brokerage Berkadia, which brokered the sale. MF1  provided two floating-rate, three-year loans for the properties, totaling $280 million, per Berkadia.

The deal closed Friday, Cardone confirmed in a tweet.

Part of the acquisition will be financed by $220 million from retail investors who invested through Cardone’s platform, according to SFBJ. The majority of Cardon’s offerings are open only to accredited investors, with minimums generally starting at $10,000, but some are also available to non-accredited investors, including the Las Olas property.

Cardone is seeking to raise up to $75 million for the Fort Lauderdale property, with a minimum investment of $1,000, according to an offering circular. In a presentation on the property, gross rents are estimated to rise 47 percent over 10 years, and rental income by 45 percent.

All four properties will be rebranded under the 10X Living brand.

Since 2017, Cardone has raised over $527 million from over 5,400 investors across 10 funds, according to the offering circular. The majority of the investments are multifamily properties in the Southeast and Texas, plus one office property in Aventura, Fla., where the company is based. Cardone purchased the 220,000-square-foot office building at 18851 Northeast 29th Avenue, next door to Cardone’s headquarters, for $93 million in June.

Update: This story has been updated with the acquisition price and financing information for two of the four properties.