Manhattan Office Market Appears to Round a Corner in COVID Recovery

Challenges remain, however, into next year and beyond — but the latest numbers are generally positive 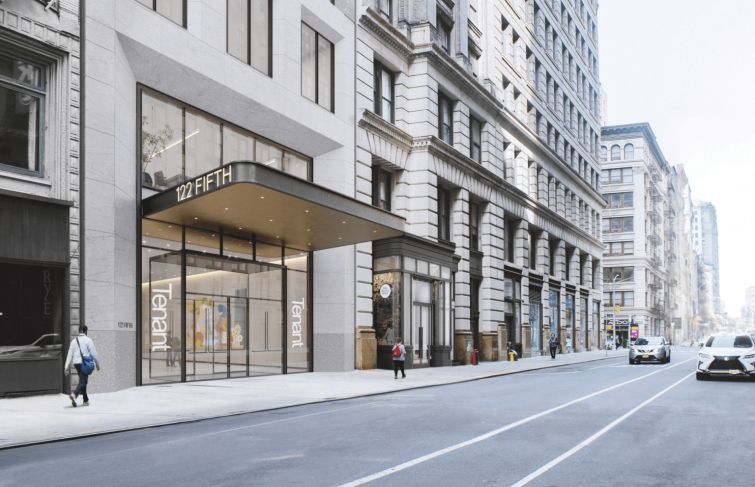 Tech giant Microsoft leased 143,510 square feet at 122 Fifth Avenue in October. The deal was one of the major drivers of Midtown South’s generally positive office leasing numbers for the past few months. Photo: Getty Images

It’s safe to call it a comeback.

Commercial leasing volume by square footage in Midtown South was 109 percent above its five-year monthly average in October, according to brokerage CBRE. Pending anything unexpected from the coronavirus’ omicron variant, observers said it was safe to say the neighborhood had commenced a solid recovery from the depths of the pandemic.

The availability rate in Midtown South was down to 18.2 percent in October versus September when it was 18.8 percent, per CBRE data released in early November, while its average asking rent dipped slightly to $78.37 per square foot compared to the month prior when it was $78.98. The two deals that influenced these numbers the most were Microsoft taking 143,510 square feet at 122 Fifth Avenue and Verizon leasing 139,000 square feet at 155 Delancey Street (which CBRE categorizes as Midtown South).

Analysts say that these numbers reflect that some commercial tenants are mainly looking for the best way to lure employees back to a COVID-safe environment, while others are simply taking advantage of more space coming online since the pandemic began.

“Midtown, Midtown South and Downtown — all three markets have examples of tenants relocating to newer buildings or Class A buildings, or renovated buildings, or buildings that might be closer to major transportation hubs,” Wallach said. “That’s absolutely part of the narrative and I would say it is definitely what’s helping drive tenant demand.”

“The biggest activity that I see and our team sees is new construction … Hudson Yards is doing really well; [World] Trade Center is pretty much filling up,” Azovtsev said. “I think that companies in general are looking for better space, looking for ways to incentivize people to get back to the offices and create a better office environment for people who want to come back to the office.”

Insurance, consulting and financial firms are specifically pulling the trigger on deals to relocate within the city, while startups are moving at a slower pace for a variety of reasons, according to Azovtsev.

He rattled off at least eight deals in the last 60 days that fit the description of companies relocating to satisfy workers with adjusted expectations following months in a public health crisis, all ranging between 30,000 and 240,000 square feet.

Estée Lauder Companies, which has over 400,000 square feet on a 20-year lease at 767 Fifth Avenue and 110 East 59th Street, is making improvements to the spaces it took over before the pandemic to make them more in keeping with new technologies, more desirable finishes and improved workplace strategies, Azovtsev added.

While the leasing market has seen considerable activity in the past few months, Wallach said tenant demand in Midtown could go into overdrive once the Long Island Rail Road service comes online at Grand Central Terminal at the end of 2022. That is a long-awaited, $11 billion project that has vexed the Metropolitan Transportation Authority since 2005.

Other transit projects should help too. The Port Authority Bust Terminal is in the planning stages for a rebuild while Metro-North service will be available to and from what could be a drastically improved Penn Station starting as early as 2025. A third of Manhattan office inventory is within a 10-minute walk from Penn Station, the Port Authority and Grand Central.

And landlords have started pouring money into their properties to entice companies to ink deals.

Case in point: Tribeca Investment Group, PGIM Real Estate and Meadow Partners announced in April that they would spend $350 million to redevelop the 700,000-square-foot Textile Building at 295 Fifth Avenue.

The 17-story, 1920s building — nestled between Madison Square Park, Penn Station and Grand Central — will offer outdoor amenities for workers as well as an indoor layout that promotes flexibility and public health. The Textile Building will be ready for occupancy in the third quarter of 2022. Two more stories will be added making it 19.

Caught in the wake of this uptick in commercial leasing is the demand for residential space in Midtown as workers returning to offices hope to cut out the subway or rail commutes as much as possible.

“We’ve seen a direct correlation between people coming back to work in the office in Midtown — whether they were in the east side or west side — but they are coming back to Mercedes House particularly so they can live closer to the office,” Epstein said. “If they’re on a hybrid schedule or they’re going back full time, they still want to be close enough so that they’re not taking the subways.”

The number of leases at the 701-unit Mercedes House started to surge in August, according to Epstein, and the apartments are rented to residents who are moving back into Midtown South from outside the five boroughs, and even out of the tri-state area, she said.

Two Trees has about 15 other residential properties throughout the city, all of which are experiencing the same uptick in occupancy.

“The 99 percent occupancy rate means people are staying; they’re renewing. We’re seeing an increase in the renewal rate from the mass exodus that the pandemic brought with it when people just didn’t want to be in New York City in general,” Epstein added. “The whole [Two Trees] portfolio is 99 percent occupied, across the board.”

While the past five months have seen an indubitable improvement in office leasing — with November leasing cracking more than 3 million square feet for the first time since January 2020 — the market still has a long way to go.

Colliers found that 37 million square feet of additional space came on the market in Midtown since the pandemic hit, with another roughly 24 million space expected to come online between 2022 and 2024.

The big question for Wallach? When will demand return to a level that is able to absorb all the space that became available during the pandemic and that will become available in the near future.

Predicting when the market will reach a 10 percent positive absorption rate, which commercial landlords regard as the ideal, remains a difficult projection to make at this point. Demand has to be strong enough to offset the supply, but the early indicators are “encouraging,” according to Wallach.

“So supply is continuing to pose a challenge to Manhattan’s recovery because of that net additional 37 million square feet the market has to essentially chop through in order to get back to equilibrium, and that doesn’t include the additional space that’s yet to come,” Wallach said.

In Manhattan, demand for new office space fell by about 10 percent from September to October, according to data from commercial leasing platform VTS.

Meanwhile, demand from prospective tenants for office space nationwide fell to its lowest level this year in October, sliding down 30 percent since peaking in August, a pandemic high, according to VTS. That could signal further challenges, whatever recent gains.

“The longer we stay in limbo — the place where, even with vaccines and better COVID-19 treatments, there is still trepidation about returning to work — the greater the likelihood we have a permanent loss of demand for office space and, eventually, a new normal,” Nick Romito, CEO of VTS, said in a statement. “Time is not on the side of office leasing.”