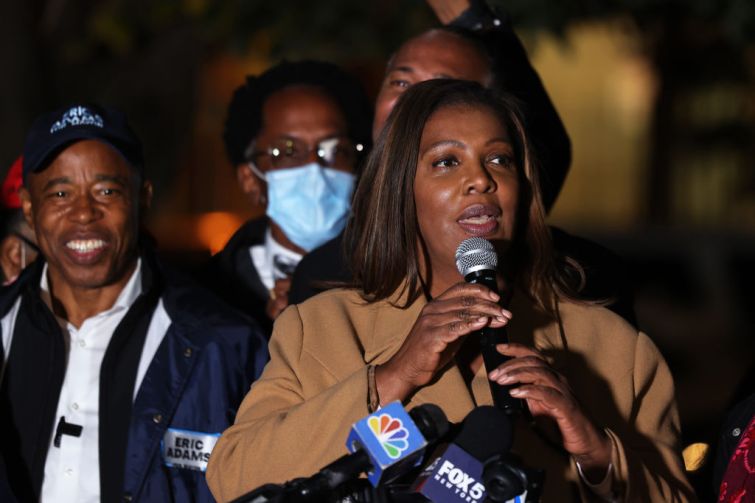 State Attorney General Letitia James speaks during a Get Out the Vote rally at A. Philip Randolph Square in Harlem on Nov. 1, 2021 in New York City. Photo: Michael M. Santiago/Getty Images

Letitia James dropped out of New York’s governor’s race on Thursday, announcing on Twitter that she instead plans to run for reelection as New York State attorney general.

Her exit from the high-profile governor’s race after announcing her run in October leaves other candidates, like the current governor, Kathy Hochul, and Public Advocate Jumaane Williams with one less competitor.

“I have come to the conclusion that I must continue my work as attorney general,” James wrote on Twitter.  “There are a number of important investigations and cases that are underway, and I intend to finish the job. I am running for re-election [sic] to complete the work New Yorkers elected me to do.”

James, who was elected attorney general in 2018, did not further clarify why she decided to leave the race nearly six weeks after announcing her candidacy. She did not immediately respond to a request for comment

Her announcement came the same day The New York Times reported that the attorney general’s office planned to subpoena disgraced former President Donald Trump as part of a civil fraud investigation into his business practices to determine if the Trump Organization submitted false property values to potential lenders.

The former New York City councilmember and public advocate’s run for governor was historic, given that James could have been the first Black female governor in the United States, NYT reported.

James announced her plans to run for governor just one day after former Gov. Andrew Cuomo was charged with forcibly touching an aide in the governor’s mansion. James’ earlier report, which found that Cuomo sexually harassed multiple women, creating a toxic workplace, was ostensibly a key factor in his decision to resign from his post.

James had received some support from unions, including the Transportation Workers Union International, but as an incumbent and powerful fundraiser, Hochul was ahead in early polls and had curried favor with New York’s real estate industry.