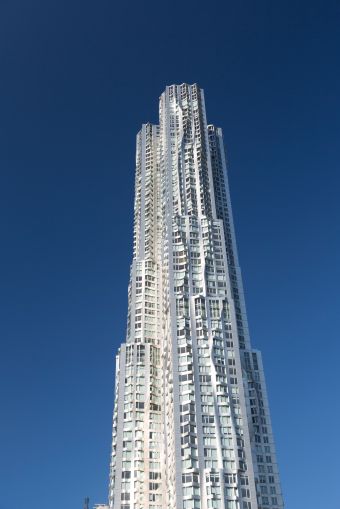 The Manhattan-based investment giant Blackstone is near closing a deal to acquire the luxury rental tower at 8 Spruce Street for $930 million — one of two massive transactions for the property owner nearing completion in the city.

The deal for the 76-story Spruce Street property, located near the Brooklyn Bridge, could close as early as the first quarter of next year, according to a source familiar with the deal.

Being sold by Nuveen and Brookfield Asset Management, the building was refinanced with a $550 million commercial mortgage-backed securities loan in 2014 from the New York City Housing Development Corporation, though it has no affordable housing components, The Real Deal reported. Blackstone would assume this loan if it goes through with the deal, according to the source.

When the coronavirus hit, that loan was put on mortgage-backed security tracking firm Trepp’s watchlist after rental occupancy in the property fell to 74 percent in September 2020 from 98 percent at the end of 2019, TRD reported. But the residential apartment market quickly heated up in 2021, surging to the highest on record this fall, Bloomberg reported. The building was 95 percent occupied in November.

This residential building isn’t the only location the property giant has its eye on — Blackstone is also approaching the purchase of a 49 percent stake in One Manhattan West in a deal valuing the skyscraper at $2.85 billion, a source with knowledge of the deal confirmed.

The One Manhattan West deal would indicate that investors aren’t deterred by the pandemic in considering office property purchases, even as the coronavirus forced much of the commuting world to work from home, The Wall Street Journal reported. And a recent surge of coronavirus has already hurt the return to office.

The 2.1 million-square-foot office building opened in 2019 and is also owned by Brookfield’s partner, Qatar Investment Authority, WSJ reported. That property is over 90 percent leased to firms including Skadden, Arps, Slate, Meagher & Flom and the National Hockey League.

Brookfield put that office property up for sale in September through a Cushman & Wakefield team led by Doug Harmon and Adam Spies. Harmon did not immediately respond to a request for comment, and Spies declined to comment.