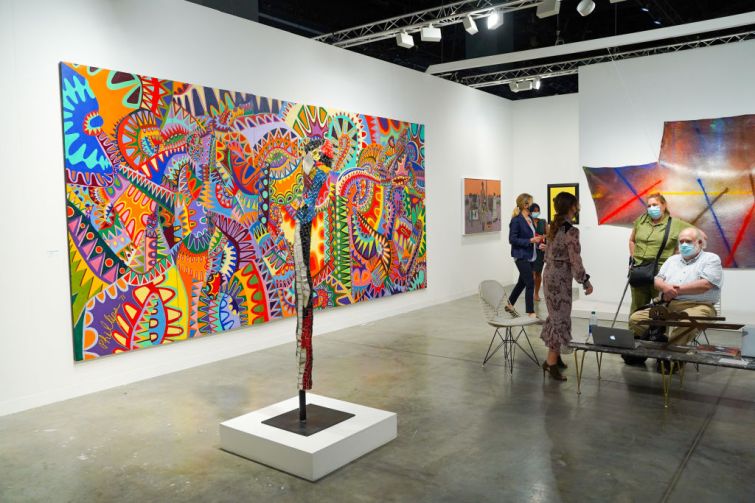 It’s all work and all play for Miami’s real estate developers this week. Art Basel Miami Beach is back and that means there are parties to attend, art to marvel at, and most importantly, deals to be made.

The prestigious modern art fair, canceled last year due to the pandemic, returns this week with all the surrounding spectacle. Over the years, the event has burnished the Magic City’s image from party town to highbrow cultural center (with a lot of highbrow partying mixed in). Not only do attendees fill up hotels and restaurants, but rich buyers and investors also make an appearance, providing local developers and agents opportunities to broker deals.

Each year, thousands descend onto Miami for the week of Art Basel, turning the city into a hedonistic paradise. Hotels have filled up at top dollar. (Good luck getting a room at any establishment this week.) Sought-after restaurants are packed or closed for private events that boast A-list celebrities. (The Red Rooster is set to host a soirée for designer brand Ferragamo.) And world-renowned artists offer concerts for the lucky few. (Cardi B and Lizzo are said to be performing at exclusive Miami Beach hotels this week.)

There’s no better advertisement for the city.

“I use Basel as a showcase for Miami and all of our businesses,” said Miami-based developer Camilo Miguel Jr., CEO of Mast Capital, which is developing high-rises in Brickell and Miami Beach.

For real estate executives, Art Basel is as much about play as it is about work. Miguel has a ticket to the fair, where he plans to meet potential investors.

“While we’re walking around, looking at art — we’re talking about art, obviously — [but] we’re also talking about the markets and where there are opportunities,” he said.

The event provides a rare opportunity to get close to moguls and top business executives. Deco Capital Group is developing a waterfront mixed-use project in Miami Beach, a mere mile from the convention center. The firm’s founder, Bradley Colmer, hopes to meet a buyer for the 15,000-square-foot luxury penthouse apartment, or a tenant to fill the development’s 32,000-square-foot office, say the head of a hedge fund perhaps.

“Can those kinds of meetings happen in the absence of the type of environment that Art Basel creates? Yes, they can, but it requires a little more effort,” Colmer said.

While talks usually begin during the week of the fair, deals rarely close during that timeframe, both developers agreed.

The residential market is another story. Art buyers and onlookers may also want to snap up a residence. It’s no coincidence that Carlos Rosso, former president of the Related Group’s condo division, launched his first project since leaving the firm, the 228-unit Standard Residences in Midtown Miami. The developer hosted a mid-day cocktail party for brokers and potential buyers at The Standard Spa hotel in Miami Beach.

This year’s edition also marks the return of international buyers, with some brokers looking with apprehension. Earlier this fall, President Biden lifted all restrictions for vaccinated travelers after a 19-month ban. During the hiatus, residential real estate prices have soared thanks to domestic buyers flocking to the Sunshine State.

Douglas Elliman’s Dina Goldentayer, one of Miami’s top luxury residential brokers, sees this week as a ”litmus test” for foreign appetite. “When they were here two years ago, a house they liked for $7 million is now $12 [million]. Are they going to act or are they going to have sticker shock?” the realtor said.

While Miami this year has rebranded itself as a nascent business hub, attracting high-profile companies, many credit Art Basel for starting the trend back in the early aughts. Thanks to the art fair, which held its first show in 2002, the city has gained a reputation as a cosmopolitan destination with serious cultural offerings, no longer just a place for beach bums to sunbathe. Following the success of Art Basel, competing shows, such as Art Miami and Red Dot, have sprung up. In response, the city’s hospitality scene improved to cater to a high-end clientele.

None has benefited more than South Florida’s real estate industry.

“[As] more Picassos have been sold in Miami, the price of real estate has gone up,” said Rosso, who’s developing a condo in the city. “Miami, after so many years of coming down to buy art, becomes a possibility of a place to live.”