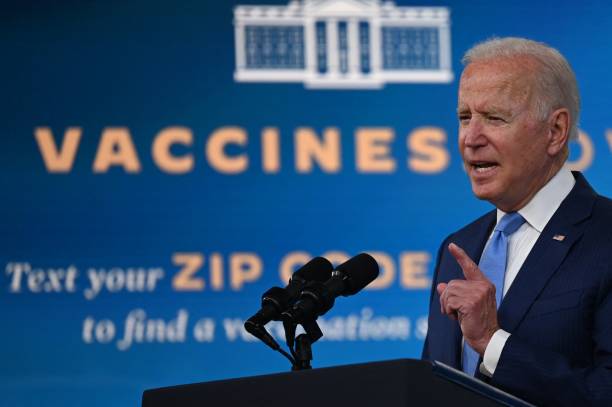 Employees at companies nationwide with more than 100 workers must receive full doses of the COVID-19 vaccine — or show proof of negative tests on a weekly basis, President Joe Biden announced Thursday.

The mandate from the Department of Labor’s Occupational Safety and Health Administration (OSHA) will require staffers of large companies who opt not to receive the vaccine not only to display a negative COVID-19 test regularly but also wear masks at work — regardless of state or local mandates already in place, according to the White House.

To limit barriers to receiving vaccinations, OSHA is also demanding that employers offer paid time for workers to receive their required doses.

“The virus will not go away by itself, or because we wish it away — we have to act,” Biden said in a statement. “Vaccination is the single best pathway out of this pandemic.”

This latest move in the ongoing struggle to raise the vaccination rate will affect approximately 84 million employees. Beyond pandemic protection, the rule has the potential to also help workers return to an in-person work format, which has had an uncertain timeline, thanks to the delta variant and the stall in vaccinations.

In addition to OSHA, the Centers for Medicare & Medicaid Services (CMS) also announced that it will require health care workers at Medicare and Medicaid facilities to receive full doses of the vaccine. This mandate pertains to more than 17 million workers from hospitals and health care sites across the country.

Both OSHA and CMS set a deadline of Jan. 4, 2022, for employees to receive their full shots.

This latest mandate boosts federal, state and private companies’ similar measures to increase vaccinations among their workers. New York City landlords Related Companies and Durst Organization paved the way to enact strict vaccination requirements, demanding employees receive their full doses or get axed. However, many have been providing exemptions for religious and medical reasons.

Both landlords reported success with their mandates, with Related telling Commercial Observer it reached 100 percent compliance in September and Durst boasting a 99.7 percent rate as of early October.

Meanwhile, Mayor Bill de Blasio required that all New York City municipal employees receive the vaccine by the end of October, which applied to 160,500 workers: 9,000 of whom were put on unpaid leave this week for refusing to get the shot. An additional 12,000 municipal workers remain unvaccinated for medical or religious reasons.

This mandate has endured widespread pushback from city workers, resulting in a lawsuit from the city’s police union. Even though the union warned that thousands of cops would be pulled off the street so they don’t have to get vaccinated, the number has only been 34 so far.

While a Staten Island judge denied the unions’ plea to stall the mandate, the lawsuit will continue with a Nov. 12 court case.

As of now, 70 percent of American adults are completely vaccinated.

“This is significant progress, made possible by a vaccinations program that made shots free and convenient for months,” per the White House statement. “But more vaccinations are needed to save lives, protect the economy and accelerate the path out of the pandemic.”