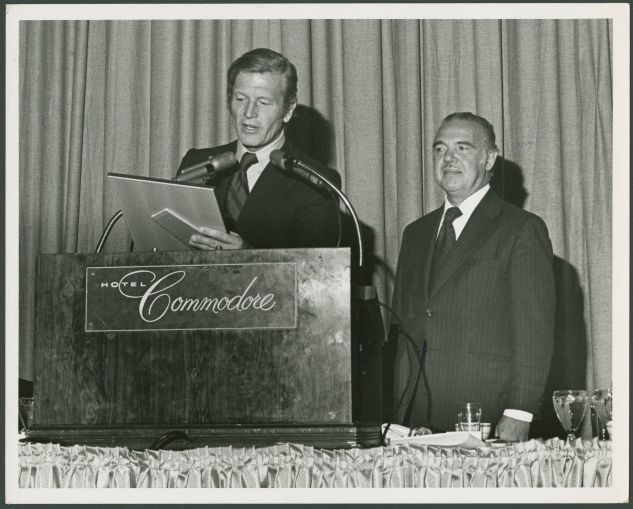 The New York Building Congress and its members may today routinely help shape city policy and historic developments, most recently lobbying strongly for the $1.2 trillion infrastructure bill passed in Congress and pitching demolishing the perpetually clogged Brooklyn-Queens Expressway, but that almost wasn’t the case.

The organization, which formed during the Roaring 20s, teetered on the edge of irrelevance in the 1980s and was mainly looked at as little more than a social club.

“It was a place to go to a golf outing, we used to have a Christmas show, we had luncheons where people would bring clients,” said Louis Coletti, the Building Congress’ first president, who now serves as the president and CEO of the Building Trades Employers’ Association. “Nobody had ever heard of the New York Building Congress nor was it a factor in public policy.

“It really was a very small club,” Coletti added.

While it struggled in the 1970s and 1980s, like much of New York City, it got off to a strong start when it formed in 1921. As the city went through an unprecedented building boom in the 1920s — with skyscrapers, hotels and stadiums popping up seemingly on every block — there was little coordination among the architects, contractors, engineers, unions and developers behind the projects. That’s where the Building Congress came in.

“A group of guys … said, ‘Let’s pull this together and let’s create something and really pull together the various pieces of the industry,’” said Carlo A. Scissura, the current president of the Building Congress.

And the founders weren’t alone in that thinking. Consolidation was the thought du jour at that time, starting about 30 years earlier when New York City was merely Manhattan and parts of the Bronx.

“In the 1880s and 1890s you have this Gilded Age period — you have the Vanderbilts, the Astors — and the modern corporation the way we think of them today is happening,” said Kevin Draper, a historian who runs the New York Historical Tours. “J.P. Morgan was one of the people at the center of it. He said, ‘All of this competition and all of these different organizations is chaotic and it’s not running as smoothly as it could.’”

From that thinking came the consolidation of several different companies to form both General Electric and U.S. Steel. And it also helped lead to the five boroughs, Draper said.

Before 1898, Brooklyn, parts of the Bronx, Staten Island and Queens (which at the time was comprised of multiple cities) were all on their own. But the leaders at the time, taking a page from the business industry, thought it would be better to pool resources — creating single agencies like the New York Police Department and the Sanitation Department — to form the five boroughs. (Some still debate if Staten Island is truly a part of New York City.)

Over the next 30 years, several organizations popped up around the city to unify business interests, including the Brooklyn Chamber of Commerce and the Real Estate Board of New York.

“That’s the moment when folks in business and leadership said, ‘I think this New York thing is onto something,’” Scissura said.

A shady perception still shadowed the construction industry, however, one that carried over long past the 1920s and that drove it to clean up its act.

“The image of the building industry was a black mask with a gun in your pocket,” said Frank Sciame, head of Sciame Construction and former chairman of the Building Congress. “Despite all the good that we do, this was the image.”

Because of the chaotic building boom — with zoning regulations to limit the scale of projects only starting in 1916 — combined with the consolidation of other large firms and the city’s rapid growth, it was easy for the public to distrust the people behind it.

“Everything in your life was somehow being effected,” Draper said. “Think about how confused we all are today with the talk of the tech industry; that’s kind of what was going on back then.”

The construction industry itself was fraught with ethical, labor and standard issues when the Building Congress stepped in. Its first major action was creating a code of conduct in 1921, which The New York Times then described as “an attempt to cure existing trade evils.”

The code of conduct made it unethical for companies to jack up the cost of construction or deliver shoddy work. It also forbade — in theory — members from skirting building codes and allowing unsafe job sites.

Aside from that, the new organization created an apprentice program in 1922 to help train 7,000 skilled construction workers and raise the standards of the quality of work in projects, according to the Building Congress.

The Building Congress’ early members also had their hands in creating iconic buildings like the Chrysler Building and the Empire State Building. But, like many things in New York City, that all changed during the fiscal crisis in the 1970s that nearly bankrupted the city.

Membership numbers started to dry up and, as a result, the group was simply known for its few events. Pushing for public policy then was mainly done on a volunteer basis by some members, and then only sporadically. There was no unified front and, since many members were busy running their own firms, the Building Congress’ impact was barely felt, Coletti said.

All that changed in the late 1980s when George Fox, Jack Rudin, Peter Brennan, Joseph Newman, Charlie Schaffner and Der Scutt —  who Coletti calls the “founding fathers” — realized that there was an increasing amount of government policy being kicked around that impacted the industry and it therefore needed a full-time person fighting on its behalf.

Another construction boom was starting — with this one having to deal with newer realities such as the Occupational Safety and Health Administration (founded in 1971), the Clean Air Act (signed in 1970), rezonings of neighborhoods, and landmarkings of properties, Draper said.

“In the ‘80s they were thinking this isn’t the 1950s,” Draper said. “We aren’t manufacturing things like we used to. This is becoming more of a consumer society. The beginning of rezoning neighborhoods, neighborhood names, that’s all tied in with all of that.”

To find the right person to become president and lead their push into public policy the Building Congress turned to the Times and put an ad in the paper. Coletti, who previously served as a county manager in New Jersey, saw that listing and decided to apply.

The interview process took about two years and Coletti, then in his mid-30s, was set to turn it down in favor of a job in public finance since the Building Congress had little money. By the final meeting, though, he signed on to lead the organization.

“My wife thought I was out of my mind,” he said. “But you had to be in the room with those people. Their sense of commitment about what they wanted this organization to become, and their willingness to participate in it, was just something that convinced me that I didn’t want to be anywhere else but here.”

“It turned out to be the best thing that ever happened to me personally and a great thing for the industry,” he added.

Coletti was hired in 1986 and it didn’t take long for him to start some major changes. To the chagrin of a number of members, he axed some of the events, including the popular Christmas show, for which the Building Congress had hired a Broadway playwright to come up with skits about what happened in the industry. Practices had been held nightly in Coletti’s office.

“There were people in the industry who liked the fact that it was just a social organization,” Coletti said. “I had to be the person to say, ‘We’re not doing that anymore. That’s not the image we want to project.’”

Even if some members were angry with the changes, history would take a different view of Coletti’s efforts.

“During those years they pulled together what we see [today] in the organization,” Scissura said.

Instead of practicing Christmas skits, Coletti quickly got the organization tapped by the city to help the then-struggling Board of Education. At the time the agency was in charge of building new schools, but the process for each one often took nearly a decade, and New York’s leading politicians at the time, Mayor Ed Koch and Gov. Mario Cuomo, refused to pump more money into the organization before it made some reforms.

“What we came back with was that the process was so broken so don’t bother,” Coletti said.

The Building Congress drafted the framework that would help create the New York City School Construction Authority, which was formed in 1988 and which has since been responsible for all school construction projects and is regarded by some like the Center for an Urban Future as one of the better-run city agencies.

Coletti also helped find the agency’s first president, Charles Williams, after ducking suggestions from Koch to take the job himself.

Coletti and the Building Congress later helped organize a massive rally in front of City Hall to protest then-Mayor David Dinkins’ capital budget cuts that would impact the construction industry. The protest got so large that developer Lewis Rudin and Cardinal John O’Connor had to be flown in on a helicopter to get to the podium and speak, Coletti said.

That increased relevancy continued when Richard Anderson took over for Colletti, and the organization’s impact was really seen when it helped pull together the industry to help after the terrorist attacks on 9/11 brought the Twin Towers down.

“You saw all of our members coming together seamlessly, not asking any questions, just stepping up and doing what had to be done,” Sciame, one of the former chairs, said. “It was just wonderful to see what could be done when everybody focuses on getting it done.”

Anderson left the post in 2017, and was replaced by Scissura, formerly of the Brooklyn Chamber of Commerce. He was tasked with continuing to move the Building Congress into the modern age.

“I was hired to really bring the organization up to speed, modernize the operation, grow the staff [and] increase advocacy work on diversity and inclusion,” Scissura said.

As part of his work, Scissura expanded the Building Congress’ efforts beyond City Hall and Albany to Washington. And last year it named Elizabeth Velez as the chair of the organization, the second woman and first Latina in the role.

“I think we’ve come in the last five years with our board and our staff to a place where we are a critical piece of the puzzle of New York City,” Scissura said. “Our reports are bolder, we are taking more public positions on things than we did in the past and that has increased our relevancy.”

But, unlike the pushback Coletti received from prior members, Scissura’s efforts have won high praise.

“There is a way to have a voice and Carlo has embraced this very enthusiastically,” Sciame said. “Now our voice is being heard louder in Washington.”