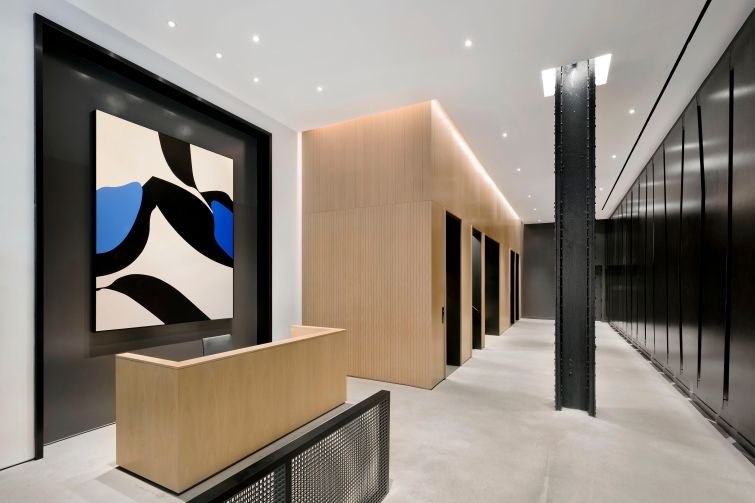 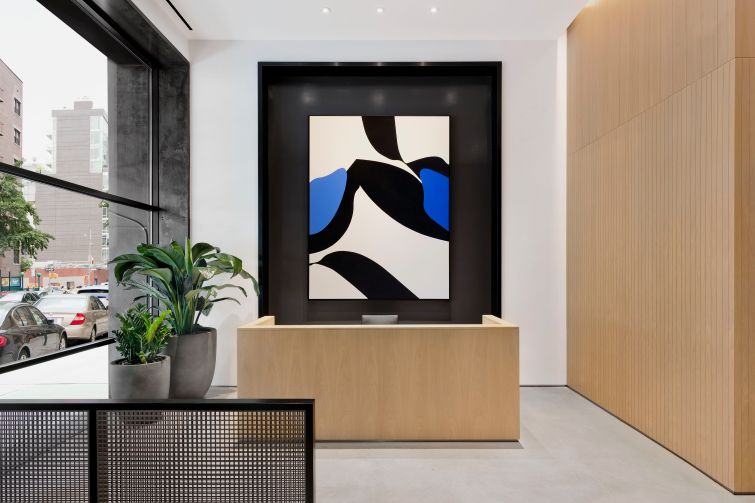 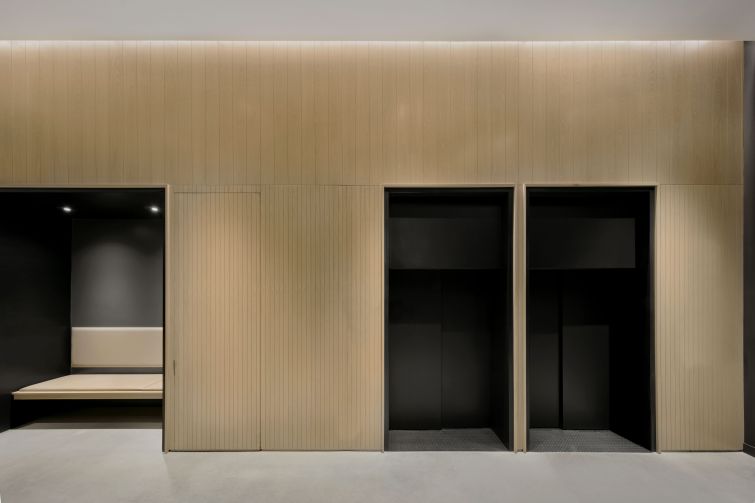 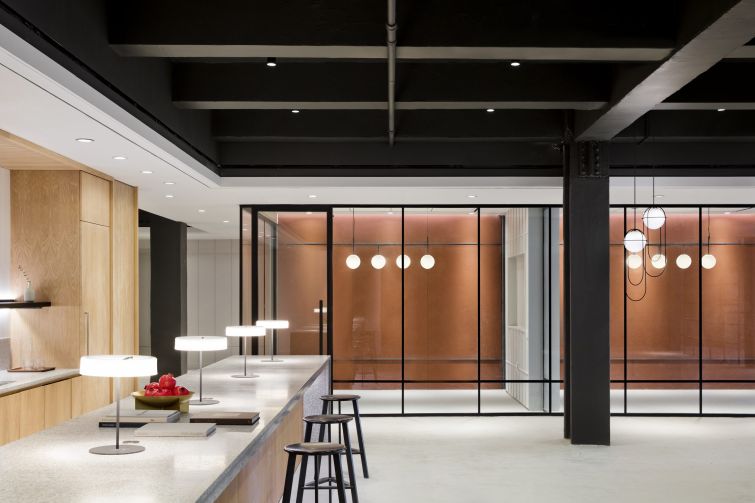 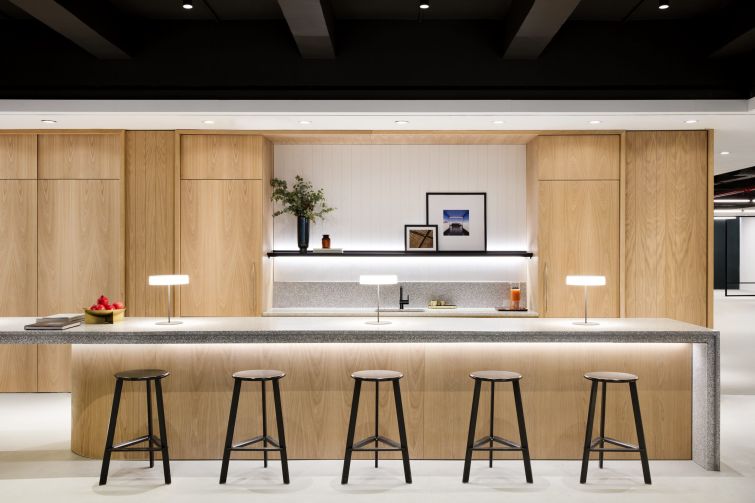 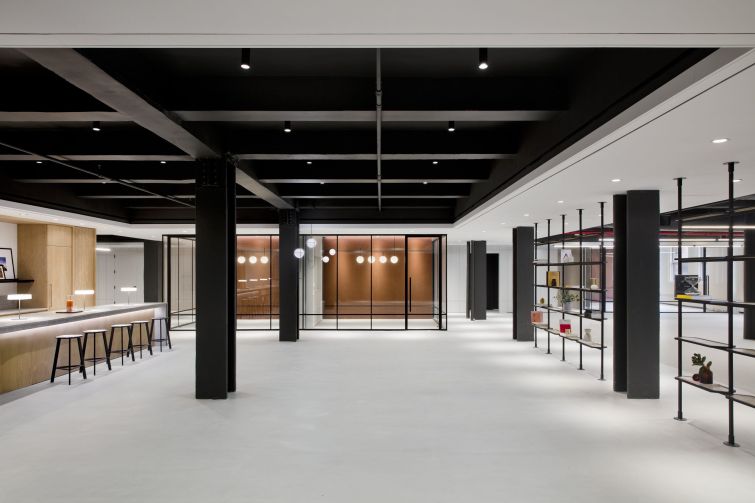 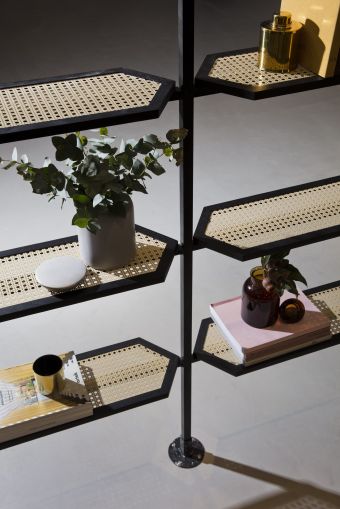 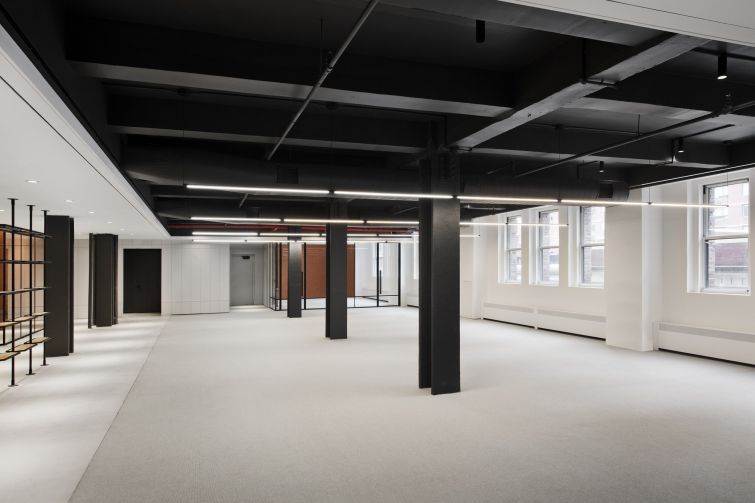 When Columbia Property Trust acquired a former warehouse at 218 West 18th Street in Chelsea four years ago, the landlord realized that the lobby of the building could use some updates to fit in with the rest of the neighborhood, which is lined with art galleries.

“Before, the lobby was kind of cold and characterless,” said Alexandra Cuber, who oversees Fogarty Finger’s commercial design team. “For a very art-focused neighborhood, it was really lacking in character and warmth.”

Fogarty Finger redesigned the dull, whiteboxed entry area with light wood paneling around the elevator bank, as well as a new matching wood reception desk. Behind the desk is a niche, painted black and hung with an abstract black, white, and bright blue painting by artist Senem Oezdogan, commissioned for this space. The work also involved exposing the structural columns, which have been painted black, and turning what had been an alcove for art along the elevator bank into a spot with a small, cream colored seat.

Upstairs, the architects also converted a 13,500-square-foot office space into a prebuilt suite. They exposed most of the dropped ceilings and painted them black to hide the ductwork over the communal parts of the office.

“We had such low ceilings,” said Cuber, who noted that the dropped ceiling was only 9 feet high, while the exposed ceiling was about 11 feet tall. “We wanted to hide as much ducting as possible and we didn’t want to lower the ceiling. We popped it up, kept it exposed, painted it black. Strike the balance and it feels much higher than it actually is.”

They also stripped the sheetrock off the building’s structural columns and painted them black too. Other additions include a new kitchen area with light wood cabinetry and a long terrazzo marble bar, two glassed-in conference rooms with burnt orange accent walls, round pendant lamps, and a floor-to-ceiling metal shelving unit that helps divide the desk work area from the communal part of the office.

Construction started on the prebuild and the lobby in November 2018 and wrapped in March 2019. Golf entertainment complex operator Drive Shack leased the space about a month before it was finished and moved in in April 2019.