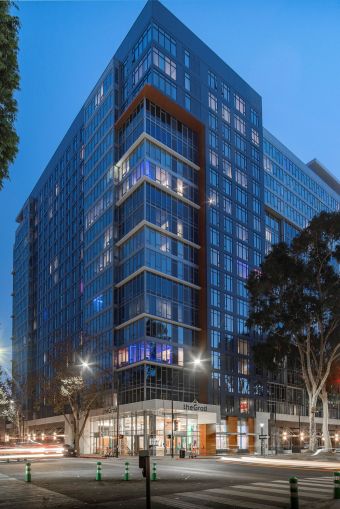 AMCAL Equities and Star America Infrastructure Partners have secured $150 million in debt from CIM Group to refinance The Grad, a 260-unit student housing property about a block away from San Jose State University, the lender announced on Monday.

The Grad is a 19-story new development that sits on 1.1 acres at 88 East San Carlos Street in Downtown San Jose. It sports 1,039 beds across its 260 units, and it includes almost 15,000 square feet of ground floor retail space.

The developers broke ground on the sprawling $188 million student housing development in 2017. The 543,000-square-foot asset is geared toward university students, but isn’t restricted to that specific tenant profile; its leases are signed by the bed and last 50 weeks, commencing at the start of the school year.

Its studio, one-, two-, three- and four-bedroom units are also fully furnished, and the rent rate includes utilities and cable and internet. There are 13 different floor plans, with sizes ranging from around 400 square feet to about 1,600 square feet for four-bedrooms, according to the property’s website.

The Grad is built around a four-story parking garage with 263 spaces, and an amenity space and recreation area on top with a fitness center, a swimming pool and sun deck. The property also has study rooms, a computer lab, a 575-stall bicycle storage area and a bicycle repair station.

Last year, the developers announced they had signed San Jose-based, family-run restaurant Lee’s Sandwiches to a portion of the project’s retail space.

CIM Group has had an active year lending on commercial property, having originated more than $2.2 billion in debt year-to-date, according to information from the firm.

More recently, CIM provided $67.5 million in debt to The Roxborough Group and AWH Partners to finance their acquisition of the Villa Florence San Francisco hotel in the city’s Union Square area. And earlier this year, the lender engaged in another large student housing deal, deploying about $136 million in construction debt to help fund Medistar Corporation’s build out of a sizable student housing complex at Texas A&M Innovation Plaza in Houston.