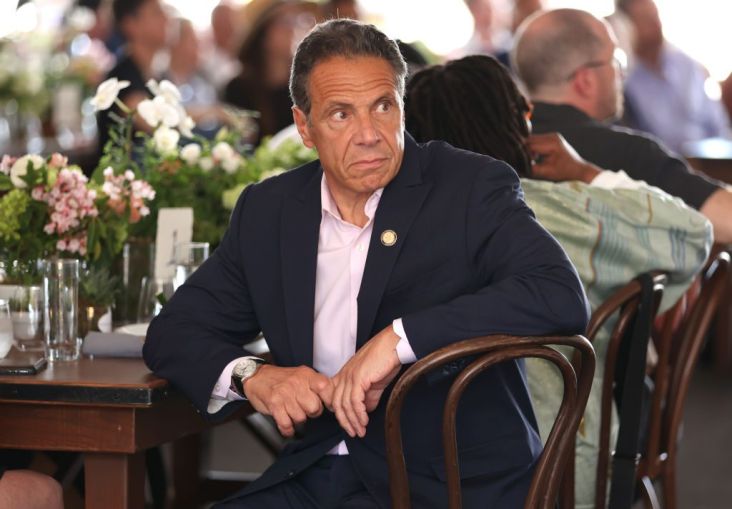 Disgraced ex-governor Andrew Cuomo engaged in multiple instances of sexual harassment, was not transparent in reporting the number of people in nursing homes who died of COVID-19 and used state resources to earn $5.2 million from his book on his leadership during the pandemic, the New York State Assembly Judiciary Committee revealed in a report released on Monday.

The report — commissioned in May by Assembly Speaker Carl Heastie — was tasked with uncovering whether Cuomo engaged in conduct that would have justified his impeachment from office, though the governor resigned in August before its release after Attorney General Letitia James found Cuomo had sexually harassed multiple women. James is now running for governor.

“This has been a profoundly sad chapter in New York’s history,” Heastie said in a statement. “I also want to acknowledge everyone who participated in all of the investigations for their cooperation, particularly the brave women who stepped forward.”

Cuomo has repeatedly denied allegations of improper conduct, and he often criticized the fairness of James’ investigation. But by resigning he avoided impeachment, which could have barred him from serving public office in New York again, according to The Washington Post.

The ex-governor cannot be impeached now that he resigned, cutting off the Assembly’s ability to punish Cuomo, according to the report. But the lawyers who authored the report said they’d been instructed to fully cooperate with the several investigations launched by law enforcement agencies into Cuomo. The firm, Davis Polk & Wardwell, reviewed 600,000 pages of documents to investigate several scandals that plagued the Cuomo administration.

The report found that Cuomo went against state ethics requirements in writing his book American Crisis: Leadership Lessons from the COVID-19 Pandemic, by requiring state officials to draft, transcribe, edit and promote the book during normal government work hours on a regular basis. One senior state official even complained that book-related work was “compromising [their] ability to work on COVID-related matters.”

“The former governor utilized the time of multiple state employees, as well as his own, to further his personal gain during a global pandemic — a time during which the former governor touted the ‘around-the-clock’ state response to the crisis,” the report read.

Cuomo was guaranteed $5.2 million in royalty advances for the book, though he downplayed the money in public statements, suggesting his profits were based on sales, the report found.

The report uncovered “overwhelming evidence” that Cuomo engaged in sexual harassment — citing the former governor’s inappropriate touching of a state trooper assigned to the governor’s protection detail and his groping of an executive assistant. In total, 12 women have accused Cuomo of sexual harassment or misconduct, and the report found that Cuomo’s defense of his actions lacked teeth.

“We have reviewed the former governor’s challenges to the allegations, and nothing in his voluminous submissions can overcome the overwhelming evidence of his misconduct,” the report read.

The Assembly finding that Cuomo committed sexual harassment supports the revelations in James’ report that found Cuomo engaged in a pattern of behavior that created a toxic workplace, enabling the harassment to occur. The executive chamber failed to follow its own harassment policies and procedures in investigating the harassment, according to attorney general office staff.

At least one law enforcement office —the Albany County Sherriff’s Office — charged the former governor with a misdemeanor sex offense in October. The charge accuses Cuomo of groping an unnamed woman’s breast on Dec. 7, 2020, the day after the governor’s 63rd birthday — an incident corroborated by new evidence uncovered in the Assembly Judiciary Committee report.

But the Albany County District Attorney’s Office cast doubt on the sex offense charge, saying it was filed without their knowledge and that it could be “potentially defective” because it did not include a sworn statement from the alleged victim.

In a third scandal that rocked his administration, Cuomo was accused of undercounting nursing home deaths during the pandemic, prompting a Federal Bureau of Investigation probe.

The report found that his executive chamber decided to disclose only the deaths of nursing home patients who died from COVID-19 inside their living facilities, but not people who died after being transferred to hospitals or outside the nursing home itself.

The Assembly report found that disclosing only in-facility deaths was not fully transparent. But the lawyers investigating Cuomo wrote that there were a number of reasons the executive decided not to disclose out-of-facility deaths, including that they were harder to verify and that doing so would have made the counts inconsistent with publicly available data at the time.

The Assembly Judiciary Committee report also examined the opening of the Mario M. Cuomo Bridge, which had serious structural problems that the state failed to thoroughly investigate, the Albany Times Union uncovered. The Assembly Judiciary Committee instructed the lawyers not to investigate the issue further, given the number of resources needed to look into potential maleficence in the project.

Heastie did not respond to a request for further comment. Cuomo could not be reached for comment.