Amid Tumultuous Year and a Half for CRE, Macroeconomic Trends Point to Recovery 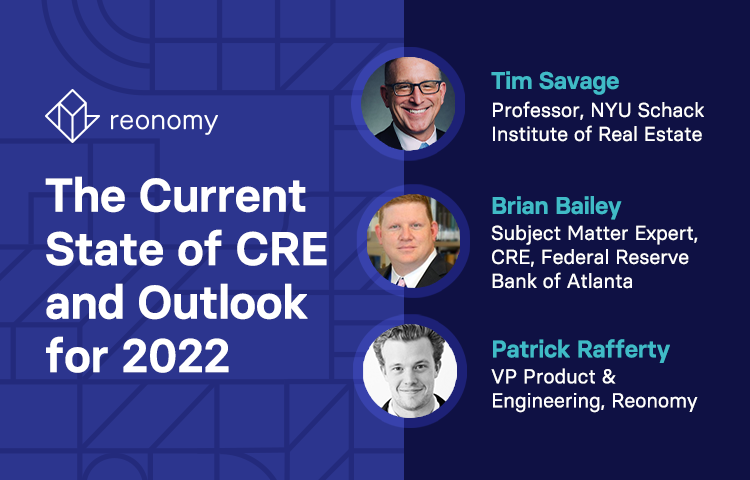 The following themes were discussed in a recent webinar hosted by Reonomy that featured The Federal Reserve Bank of Atlanta and the NYU Schack Institute of Real Estate:

• Economic recovery from COVID faces uncertainty, but is proceeding in many areas and overall economic growth for 2021 could reach approximately 9 percent
• Massive dips in labor force participation create more questions than answers around the fate of the workforce and the office sector
• Inflation in certain market segments makes any optimism regarding the overall economy a too-soon proposition
• Manufactured housing, as a solution to dips in other sectors, has seen extensive growth
• Sectors such as industrial, life sciences and self-storage continue seeing significant gains
“The Current State of CRE & Industry Outlook” was moderated by Patrick Rafferty, vice president of product and engineering at Reonomy. It featured insights from Brian Bailey, subject matter expert on commercial real estate for Federal Reserve Bank of Atlanta, and Tim Savage, a professor at NYU Schack Institute of Real Estate.

Savage noted that while COVID-19 plunged us into a recession, hope is on the way.

Looking at gross domestic product growth, he noted that while the plunge after the initial COVID announcement was steeper even than during the 2008 global financial crisis, the subsequent recovery has been just as extreme. As such, he said he believes that “we will likely see growth in and around the 9 percent mark for 2021.”

He pointed to rapid recovery from the affects of COVID in other areas as well, including within equity markets which “today sit at industry highs.”

Rejecting recent chatter about stagflation, Savage noted that “with growth somewhere between 5 and 10 percent and a CPI measure hovering around 2.5 percent relative to the past, I challenge people when they bring up this phrase, because it just sounds like a throwaway phrase to me.”

COVID remains a challenge to the economy

The panelists agreed that, despite high vaccination levels, COVID remains not just a significant public health issue, but an economic one as well.

“COVID as a public health issue remains a proximate challenge to the U.S. economy and to the U.S. financial system,” Savage said.

Bailey agreed with Savage’s comments, and pointed to the slowdown of the economic growth in the earlier part of 2021.

The panelists talked about the marked changes in the labor force participation rate, noting that its ultimate impact on CRE is hard to anticipate because so much about the so-called “Great Resignation” is a mystery.

“There have been upwards of 4 [million] to 5 million retirements, and we don’t have a good handle on [why],” Bailey said. “Retirement can be permanent, but it can also be temporary. We can see people coming back into the workforce.”

Within CRE specifically, Bailey said that the hardest-hit sectors were those that hosted large numbers of people, meaning retail, hotels and office space.

“Hospitality arguably has 16 [million] to 17 million jobs. In April 2020 alone, the economy shed roughly 7.4 million of those jobs. Close to one out of every two hospitality jobs was lost,” Bailey said.

But since then, he noted, many of those jobs have returned.

“We’ve put a significant amount of those jobs back,” said Bailey. “We’re still short about 1.3 million or 1.4 million hospitality jobs. The lack of these is very impactful on hospitality and retail. And we’ll probably see more of an impact as the services business has a full restart, and more and more folks get back to the office.”

“We’re seeing inflation in certain segments of the industry,” Bailey said. “Core in the last two years has risen from 2.3 percent to 4 percent. It was 2.5 percent early in 2020, then we saw it decelerate. We’ve seen it accelerate in 2021, and this morning the number was 6.2 percent for all items. But the real price increases are concentrated in just a few segments.”

Bailey pointed to energy, which rose from 2.3 percent this February to 24.8 percent at the end of September.

“The price of a barrel of oil is high today, but comparatively very low in 2020, as we saw the use of energy significantly curtailed. That’s showing up in the 2020 results,” Bailey said.

Lodging, impacted by the shelter-in-place mandates that halted travel, was similarly affected, showing a rise from -13.9 percent in April 2020 to 17.5 percent at the end of September 2021.

The news there is not all negative, however.

“What occurred in the summer is that as we reduced uncertainty with the introduction of the vaccine, people were ready to get out and travel at a very aggressive rate. So, from that standpoint, we’ve seen lodging rates go up in contrast with what happened in 2020 and early 2021.”

As the economy picks up again, uneven disruption has had the unexpected outcome of spikes in less traditional sectors better-suited to accept regained and even increased demand. Bailey showed a chart segmenting changes in Commercial Property Price Indices by property types, using information provided by Green Street Advisors.

Over the past year, in “areas like self-storage, net lease, manufactured housing, and lodging, we’ve seen prices up 20 percent; life sciences, industrial, up between 15 and 20 percent; and then some of the major areas — office, medical office and malls — were up 1 to 3 percent.”

On a five-year standard, malls were down 45 percent, retail was down 31 percent, skilled nursing was down 12 percent, and lodging was down a single percent.

The “winners” over that period included life sciences, which is up 53 percent; industrial, up 70 percent; and manufactured housing, which is up 93 percent.

“To me, this indicates the shift to alternative forms of real estate, such as manufactured housing,” Bailey said. “There are shortages in the lower tiers of multifamily. In some instances, the supply has not kept up with demand. We’ve priced some folks out and priced them into alternative arrangements.”

While this discussion may have left definitive conclusions on our economic future hard to reach, the facts and perspectives presented drew a clear line between areas of optimism and those where the climb toward prosperity will continue to lead uphill.

Reonomy hosts four webinars a year where top names in real estate and finance discuss timely issues of importance to the CRE sector. Keep an eye out for the next Reonomy webinar in the first quarter of 2022.