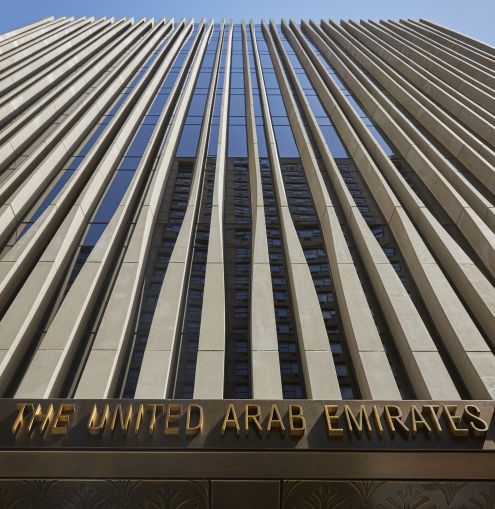 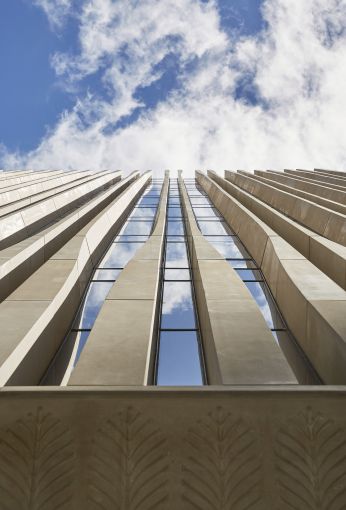 The milled limestone on the facade is meant to resemble a palm leaf. Photo: Dave Burk/SOM 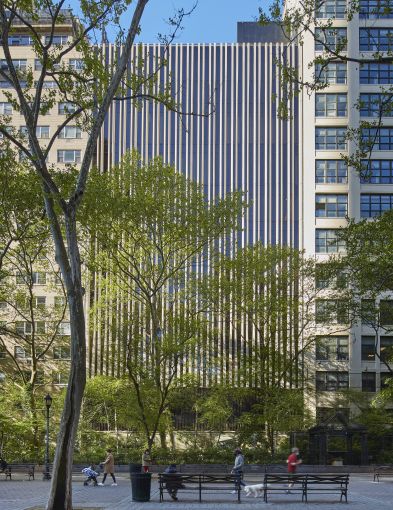 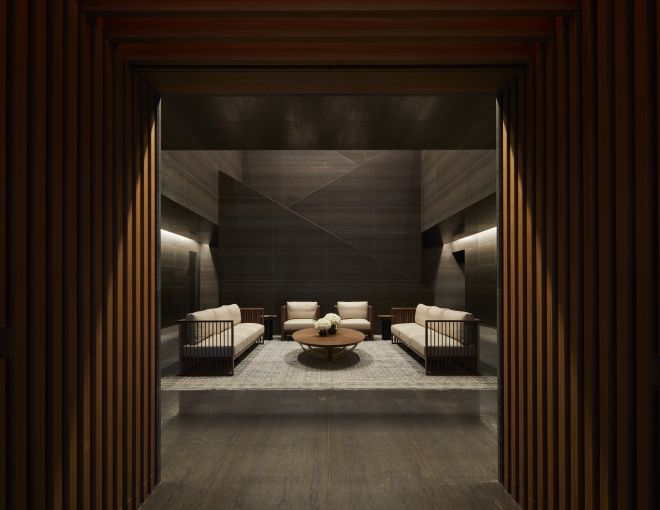 The main entryway features dark limestone walls and is arranged to mimic the courtyard of a traditional Middle Eastern home. Photo: Dave Burk/SOM 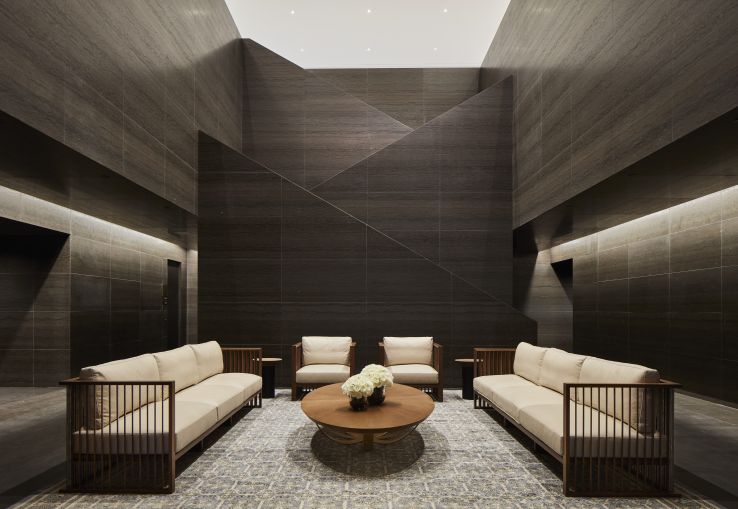 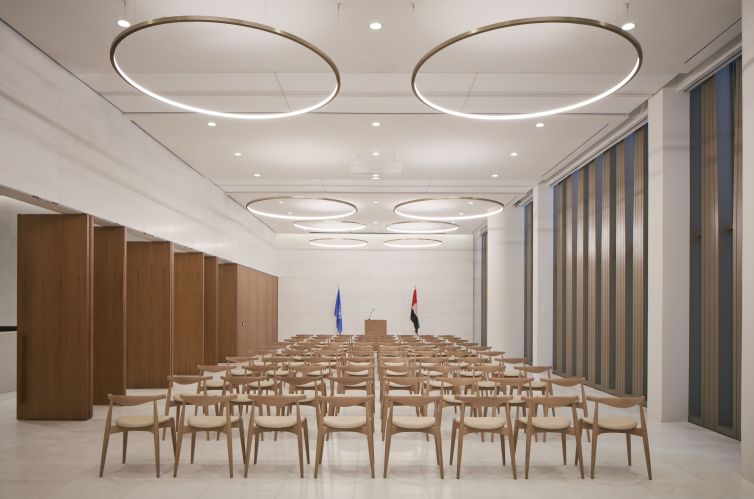 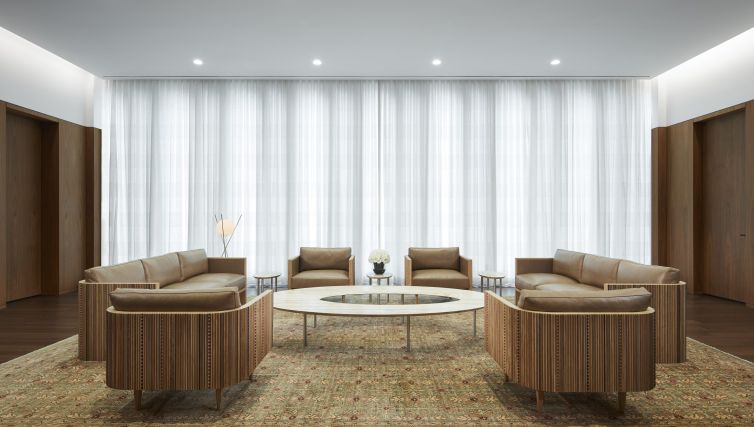 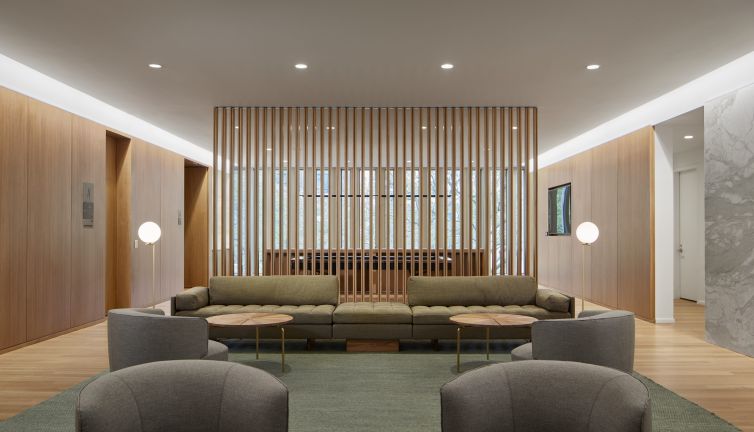 When Skidmore, Owings & Merrill was hired to design the new United Arab Emirates Permanent Mission to the United Nations, the architects decided to infuse a subtle sense of Middle Eastern hospitality into the 10-story, 75,000-square-foot building.

The 40-foot-tall entry hall, for example, is meant to resemble the courtyard of a Middle Eastern home. The space is ensconced in dark Saint Pierre Canadian limestone, which is also cut into a dramatic staircase leading up to the next level of the lobby. White linen and wood couches and chairs customized by Lebanese designer Nada Debs furnish the hall, which also features some dramatic white lighting along the black walls.

The limestone is “literally layers of ancient seabed full of small fossils,” explained SOM Partner Chris Cooper, who led the design of the project. “We’re not trying to build Middle Eastern motifs into architectural finishes. We do that through the furnishings.”

The facade of the structure at 315 East 46th Street is covered in milled strips of white limestone meant to resemble a palm leaf, while the entryway features actual carved friezes of palm leaves.

“There was a request that we merge the Art Deco of landmarked buildings in New York City with the palm leaf,” said Cooper. “So we chose limestone like the material of Rockefeller Center and these other great landmarks.”

On the second floor is a bright white lecture hall lined with wooden chairs, arrayed for a press conference or a large gathering. The third floor is supposed to be an amenity floor, with lounges, a dining room, a library, a child care center and a pool table. The lounges incorporate midcentury modern seating, including olive green couches and upholstered soft gray chairs. Strips of walnut have been arranged into dividing screens to separate the different areas of the lounge spaces, and a long slab of white calacatta marble occupies one wall.

The fourth through sixth floors include offices and conference rooms for UAE’s diplomatic workers. Meeting rooms are enclosed in glass walls inscribed with patterns found on mashrabiya, which in traditional Islamic architecture are bay windows featuring elaborate wooden latticework.

The top floors of the building include more formal conference spaces for diplomatic work. Several of these are majilis, or informal meeting areas where all the seats face each other. One of these rooms features loveseats and couches surrounded by elaborately milled pieces of wood and upholstered in a light brown leather. An oval walnut conference table with a long hole in the middle serves as the centerpiece.