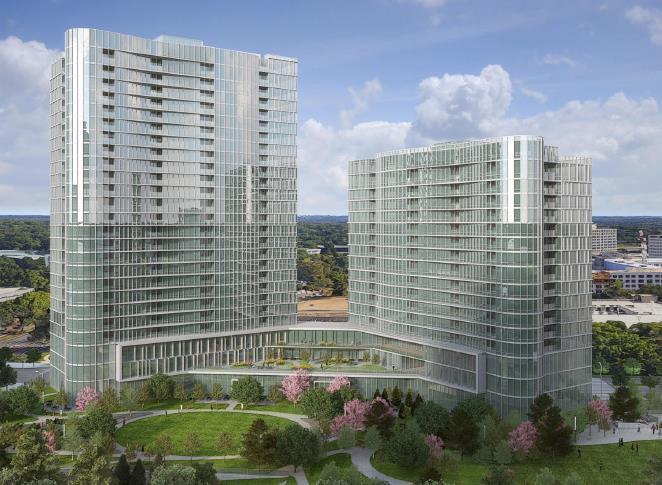 A rendering of The Mather in Tysons, Va. Photo: W&D

A lending consortium led by Huntington Bank has provided a $300 million debt package for the build-out of The Mather Tysons, a planned, two-phase senior housing development being built in Tysons, Va., Commercial Observer has learned.

The financing was provided to a joint venture between nonprofit senior living and wellness provider Mather and real estate investor Westminster Capital.

The project, which will cost $500 million to develop, will also be partly funded through a 10-year taxable green bond issuance from Mather Foundation, according to information from Mather.

A Walker & Dunlop (W&D) team including Jonathan Schwartz, Aaron Appel, Ari Hirt, Sean Bastian and Taylor Geiger advised the borrowers on the financing. W&D declined to provide any further details on the lenders in the deal or the makeup of the capital stack.

“Despite some uncertainty surrounding the senior housing market during the COVID-19 pandemic, The Mather has experienced exceptional pre-sales velocity and is well ahead of projections,” Schwartz said. “The property is very well located and caters to the ever-growing Washington, D.C., metro area.”

The Mather is being developed as a Life Plan Community, a type of senior housing project that incorporates living, lifestyle or health care amenities into a single asset. The two-building development, when fully built, will have 300 independent living apartments, as well as 26 assisted living residences, 20 memory-support suites and 42 private nursing suites, according to information from W&D.

Representatives for Huntington Bank did not respond to a request for comment.

Altogether, the site will include a 19-story tower and a 27-story tower, each woven together by the community’s shared, central amenities, which will include multiple restaurants, retail space, a fitness center, a spa, an art studio, a saltwater pool and on-site parking. There will also be about 3 acres of green space, with landscaped gardens, sculptures, walking paths and a large lawn that will double as an event space.

The Mather will be located at 7929 Westpark Drive — at the corner of Westpark and Westbranch Drives — in Tysons. The project includes two phases of development, the first of which is expected to wrap and open in 2024, according to W&D.

“Demand for The Mather is high, with strong pre-sale numbers that are well ahead of projections,” Mather CEO and President Mary Leary said in a statement as part of a press release announcing the construction financing. “At a time when banks have been hesitant to fund projects due to COVID-19 and a volatile construction market, Mather has demonstrated that this is a project in high demand with the baby boomer demographic. The Mather provides an opportunity for luxury living — maximizing wellness and cultural experiences, while also providing peace of mind by having planned for the future.”

The project is located right next to the sprawling Tysons Galleria mall, a dominant super-regional shopping center that is located about 15 miles west of Washington, D.C. Several blocks away from the site of The Mather is the Kaiser Permanente Tysons Corner Medical Center. About half-mile away is a major public transit outlet in the Washington Metropolitan Area Transit Authority’s Tysons Corner Station.

Officials at Westminster Capital did not respond to a request for comment.

This story has been updated to include additional information from Mather and a quote from Mather founder and CEO Mary Leary.