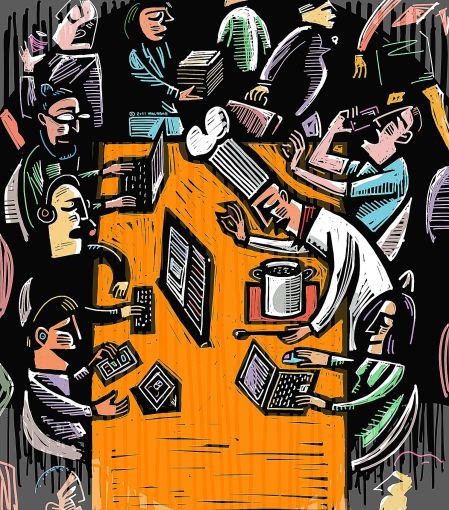 For Hegel Hei, the ringing phone has a musical sound.

As the CEO of Chinah Kitchen, an eatery in Manhattan’s Financial District that specializes in what Hei calls “homestyle” Chinese food, “the type we ate growing up as Chinese Americans,” the phone is mostly bringing in orders to cater lunches for the offices above and beyond its Maiden Lane address. It signals that the recovery from the COVID emergency that killed restaurants far and wide is entering a new phase, one in which once-wounded restaurants specializing in more upscale fare may play a vital part.

“We can see that people are trying to use gourmet food to bring people back,” said Hei on a recent busy Tuesday. “Offices are definitely trying to lure their employees back.”

Hei counts Amazon’s photo studio in Williamsburg, Brooklyn, as one of Chinah’s regular customers, preparing lunches for them an average of once a month. A year ago, they were lucky to do one catering order per month, and they were mostly feeding essential workers and senior homes. Now they’re doing three to eight a week, he said.

In a market obsessed with the thousands who have learned to be both productive and successful while working from home on their laptops, food is one way to entice workers back into the office. A catered lunch featuring food you either can’t make at home, or you can but it would take up the time you would prefer to be working, might just do the trick in an age where folks no longer feel obligated to put up with the stresses and strains of commuting.

At Chinah, for $14 you can get “Grandma’s Favorite,” featuring homemade meatballs, tomato, egg and seasonal greens on a bed of “forbidden” black rice. Or for $12, you can get their spin on kung pao chicken, featuring “tingly” chicken pieces, blistered string beans and brown rice with a side of seasonal greens. It touts the healthy qualities of its ingredients.

After a lockdown that was murder on business, the food and beverage category of retail is struggling to get up from the mat. According to a recent report from CBRE, the world’s largest real estate services firm, New York’s restaurants were “one of the hardest-hit sectors during the pandemic due to limitations on capacity and fewer people being in the city.” While some new concepts took advantage of empty spaces and cut-rate rents, demand remains “well below pre-pandemic levels.”

At the same time, with many entrepreneurs confident in the city’s recovery, CBRE said it was seeing “a competitive race to sign prime locations before they are taken, even if it means paying above-average prices.”

According to the New York State Restaurant Association, the city had more than 27,000 restaurants just before COVID hit in 2020. There are now about 2,000 fewer. Statewide, about 27,600 restaurants applied for federal Restaurant Revitalization money, but only about 9,800 received funding. It would take an additional $6 billion just to fund the remaining New York state applicants, a spokeswoman for the association said.

All restaurants were ordered closed from March of last year until June, then outdoor dining was allowed. Indoor dining remained closed until Sept. 30, and it was closed again from Dec. 14 through Feb. 12 of this year.

Matt Chmielecki, a senior vice president who oversees retail leasing in the New York tri-state region at CBRE, recalled those days when the city seemed barren of food options.

“I remember coming into the office right in the middle of the pandemic and right around lunchtime, looking around and thinking, ‘Uh-oh,’” he said. “There was nothing open, and that was certainly a disincentive to come to the office. Now with a majority of food operators back up and running, it certainly makes lunchtime easier.”

He said he wasn’t sure if gourmet offerings or catered lunches are a pandemic-induced trend, though he allowed that for “younger folk,” having lunch provided could appeal to them. Landlords have always regarded food and beverage (F&B) as an amenity that they are conscious of providing, he said.

Chmielecki did say that New York is on the threshold of a restaurant renaissance. “Anything from fast-casual to food halls to fine dining, there are a lot of people looking at space right now,” he said.

Another entrepreneur hoping to capitalize on the hunger for upscale food among the city’s office workers is Carolyn Vahey, CEO of Kitchclub, which caters to the office-catering business, allowing managers to select their menu from an array of chefs and restaurant concepts and have it delivered piping hot. Kitchclub operates out of a Manhattan commissary. You can put in your order online. It’s the brainchild of restaurant consultant Steven Kamali.

“Now more than ever food drives employees’ experience and company culture, it says on its website. “Kitchclub was created to provide a convenient and streamlined way to feed your team.”

Vahey said she sees the company in growth mode, adding more concepts and consumer choices. One of the things the company is preparing to do is add a “snacking” option so companies can stock their pantries from Kitchclub.

Once folks start returning to work on a dependable basis, Vahey said Kitchclub should still be able to generate business, and its market is not transitory. In other words, it does not depend on the current fuzzy climate in which it’s still not totally clear who’s coming back full-time, who’s staying home and who’s going to mix it up.

“People are driven by food,” she said. “We will provide them with a tasty solution. We have great longevity ahead of us.”