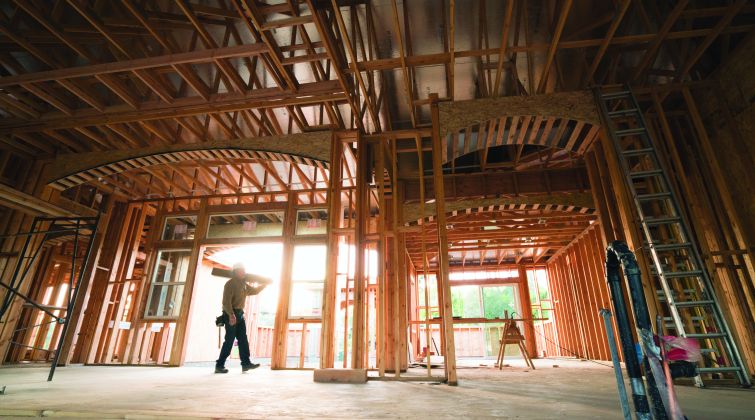 Wood, or more specifically mass timber construction, is probably not the first thing that comes to mind when thinking of proptech. Yet, as much as any algorithm, mass timber engineering is being used increasingly as a technological solution in the construction industry, particularly in low- to mid-rise buildings.

Although only included in a tiny percentage of construction in the U.S. right now, mass timber is growing as an alternative to steel and concrete construction in projects up to 18 floors, D’Esposito said. “It is considerably less than 1 percent of new projects in New York [City] and nationally,” he said. “Although, from a national perspective it’s growing faster than overall construction. The number of mass timber buildings over the past decade has pretty consistently increased in popularity.”

Two reasons for that growth are mass timber’s sustainability and aesthetics.

“What’s compelling for developers, owners and end users is the sustainability story behind timber,” D’Esposito said. “If you use the right products and you do it carefully, you can build something where the total embodied carbon of the building is greatly improved compared to a concrete- or steel-based building. So there are environmental and sustainability benefits.”

A major reason for wood construction’s sustainability impact is that it is a renewable resource that holds atmospheric carbon. Using mass timber as the primary structural system of a building results in the lowest embodied carbon compared to alternatives such as concrete and steel.

“It’s also a pre-manufactured material,” said Nina Mahjoub, a Los Angeles-based principal and structural engineer at Holmes, an international engineering company founded in New Zealand that provides structural and fire consulting services. “We can be more efficient with it by doing a lot off-site. We can save on the construction schedule, which helps cost benefits. And there is a little bit less risk on-site.”

Eric Law, a former senior director of innovation at San Francisco-based construction company Swinerton, is now working the other end of the wood sustainability equation as co-founder and CEO of Urban Machine, a startup that is about to exit stealth mode and is developing technology to recycle lumber from construction. While at Swinerton, Law researched construction waste.

“We found that construction waste is a huge amount,” he said. “We actually had a hard time estimating how much waste was going to come off a job site. I started to realize a lot of the waste comes with concrete projects where lumber is in all the formwork [or molding] and is single-project use that goes into landfill. Also, we had a lot of residential construction just around the area where I live and you’re watching dumpster after dumpster head to the landfill with wood.”

Urban Machine plans to work with fabrication facilities that “build the big slabs of wood, glue them together into, for instance, an 8-foot-wide, 60-foot-long slab for a duct,” Law said. “The fabricators take that slab and they machine it with the CNC [computerized network control] equipment to put in plumbing penetrations and bolt patterns, put hangers on it, whatever is needed, in their shops.”

“When it goes out to the field, all they have to do is assemble it like Legos,” Law added. “It’s a great solution for reducing time and cost because they are prefabricated components. There’s no formwork required like a concrete structure.”

A common fear about mass timber construction is the threat of fire. However, experts say that properly engineered mass timber produces naturally fire-retardant lumber that chars rather than burns completely.

“As the wood burns, it’s just like when trees burn,” Law said. “The bark becomes a char and it becomes a protective layer on it. They end up with this protective coating on it, which is pretty cool, because you’re using the natural properties of wood to protect itself to create that fire protection. The engineers take that into account when they’re designing their buildings.”

“The consumer perception is that [wood construction will burn],” D’Esposito said. “If you do it well, though, it will not be a greater risk than any other type of building. So that’s just in people’s heads more than anything else.”

It remains to be seen how economically competitive mass timber can be compared with steel and concrete, as all three structural components face an array of supply chain, location and demand factors, Law said.

“It depends on how far you are from the trees,” he said. “One of the challenges is shipping anything big and heavy because trucking costs right now are really high. Historically, it was very cost competitive in the Pacific Northwest where you’re close to large sources of timber. The farther you trucked it we saw a 10 to 20 percent cost disadvantage because of those trucking costs.

“We’re seeing people now start to want to pay that premium, because it’s a beautiful product from an architectural standpoint,” Law said. “And then you get the green credits on top of that. There are projects now where our clients are saying, ‘Hey, we’re going to pay a premium. We recognize it’s going to cost us more, because we’re not close to the trees, but let’s do it and move ahead.’”

The economics of mass timber is nevertheless daunting, said Steve Burrows, a structural engineer and consultant. “If you look at mass timber as a structural material, in cost terms it represents something like 20 percent of the cost of a building. If we’re thinking about this as some sort of construction revolution, it’s not. We’re still basically substituting one material for another.”

Mass timber as a sustainable building material is also questionable, Burrows said. “It’s sustainable if it comes from sustainably forested wood, but it’s not if it doesn’t,” he said. “If it’s going to be sustainably harvested, that adds cost. So, mass timber is not cheaper than the alternatives and one of the big reasons for it not having market share is price.

There are other issues, too, Burrows says, starting with metal used to connect the wood.

“The metal is stronger than the wood,” he said, “so you get very inefficient connectors, which in steel can be 10 percent of the cost. Also, [wood is] not very good in compression, so it’s not good for columns, and it’s not very good in shear, so it’s not very good for lateral systems. Predominantly, it’s used in horizontal flow systems at the moment, simply because it’s not economical to use it anywhere else. So, is this a revolution in the construction industry? I could see that mass timber could be developed into some products, because we’re trying to design more sustainably. There is scope for mass timber in the marketplace to be an economic alternative to other materials, but it’s got a long way to go.”

Still, other aspects of mass timber serve as undeniable draws now. This includes its “biophilia,” Holmes’ Mahjoub said. “A lot of our clients, especially the tech clients, are really interested in that component, as well as bringing their staff to a place that is very warm and more healthy. There’s lots of research that talks about how if you’re happier you’re more efficient, so there’s that component that plays into the aesthetic component as well.”

JLL’s D’Esposito agreed. “The other important thing to consider is that people really like mass timber buildings,” he said. “They like working and living there. It’s just a very compelling type of architecture and design, and you can leave it exposed in a way that people enjoy.

“Because of that, you are typically able to get a premium on renting out a mass timber office building, compared to a normal glass curtain wall-type of office building,” D’Esposito added. “We’ve seen that the rent premium and the velocity is faster for a mass timber building, on average, than for traditional office space.

“They’re going to keep being built, because they’re in demand.”