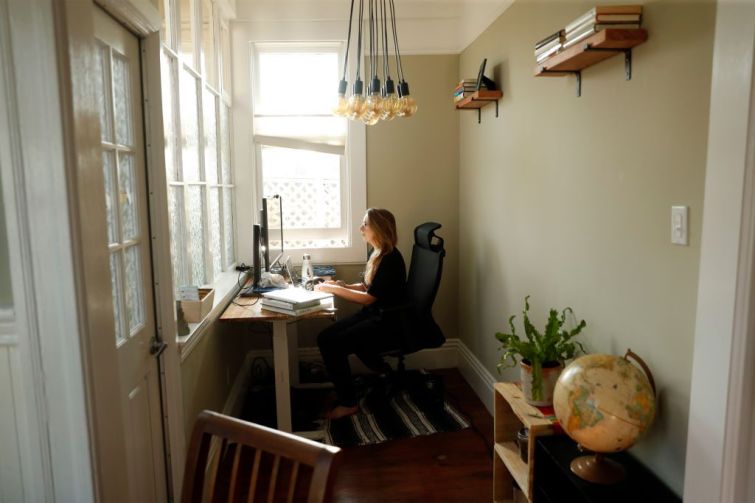 A new survey found that the majority of employees want the flexibility to continue working from home, and would be willing to ditch a raise for it. Photo: Scott Strazzante/The San Francisco Chronicle via Getty Images

Don’t rush to dust off those desk monitors and squeegee those office windows so quickly.

An overwhelming majority of Americans said that working from home has improved their quality of life and they want their employers to be open to adjusting their hours and location, a survey from accounting firm Grant Thornton survey found.

To be fair, more than half of survey respondents, 56 percent, said they were looking forward to returning to their office someday.

But of those polled, 79 percent say they want more flexibility over when and where they work and roughly half, 51 percent, said they would give up a 10 to 20 percent salary bump for more leeway.

Employees increasingly want workplaces to recognize their responsibilities, such as child care and elder care, that occur outside the office, the survey found.

“As companies return to the office, it will be more crucial than ever to give people the time they need to take care of what’s important at home,” Tim Glowa, a principal and leader of Grant Thornton’s employee listening and human capital services offerings, said in a statement.

Businesses that take the opposite approach and force workers to return to the office could spur some of their employees to jump ship.

The survey found, 40 percent of those polled said they would look for another job if their boss forced them to return full-time and 33 percent said they were actively looking for a new job in the summer. (The survey, which was first covered by Axios, polled 1,584 full-time workers of American companies between June 28 and July 1.) That’s in line with a similar report commissioned by Bloomberg that found 39 percent of employees would quit if they couldn’t work from home.

Some workers have already left their places of employment. The U.S. Department of Labor found that 4.3 million people quit their jobs, representing roughly 3 percent of the workforce, in August. That’s up from the 4 million who left their gigs in July, as overall hiring slowed by the end of the summer.

Companies are trying to get ahead of that dilemma. Amazon had scheduled an office return date three days a week starting early January, but announced Monday it would leave the decision about how often its white-collar employees could work from home to its managers. Other tech companies have allowed remote work options to continue indefinitely, although those living in cheaper locations than Manhattan or the Bay Area could face pay cuts.

Public sector workers have been encouraged to return to the office with few incentives greeting them. Mayor Bill de Blasio forced municipal workers to come back to the office in mid-September while also mandating that they be vaccinated to do so. Some managers left in response.

“The challenge that companies face is creating an engaging experience for all employees, whether they are working in an office or remotely,” Jennifer Morelli, a principal and leader of Grant Thornton’s business change enablement practice, said. “Organizations need to make sure they are providing meaningful opportunities and reasons to come into the office.”