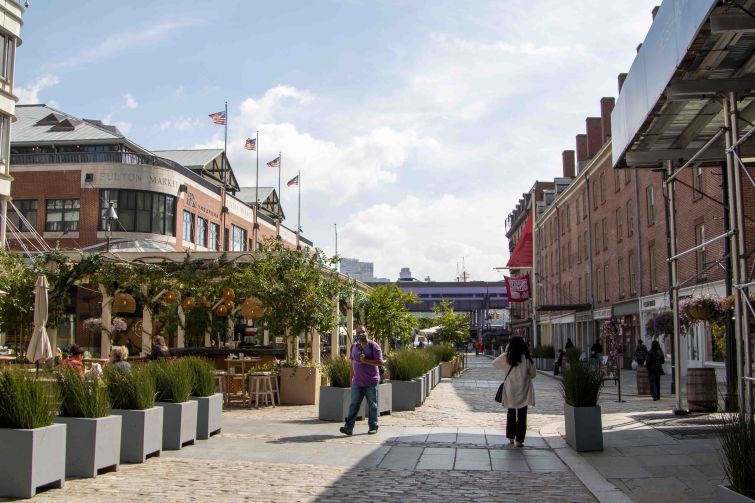 A parking lot near the historic South Street Seaport is set to be redeveloped with a 30-story mixed-use tower, despite opposition from local residents and preservationists. Photo: Julia Cherrault/Commercial Observer

If one project is emblematic of New York City development battles, it might be 250 Water Street. The fight in the Financial District has pitted the area’s largest developer, the Howard Hughes Corporation, against local co-op owners who want to keep the neighborhood the same.

A year ago, while the pandemic was in full swing, Howard Hughes unveiled its plans to redevelop 250 Water, a large parking lot that occupies a full city block between Pearl Street, Beekman Street, Water Street and Peck Slip. The property, a former thermometer factory, sits inside the South Street Seaport Historic District. Howard Hughes controls most of the buildings within the district, which stretches about five short blocks along the East River waterfront and encompasses a few dozen short brick buildings from the 18th and 19th centuries.

The publicly traded real estate company originally pitched two 38-story, 470-foot towers atop a six-story podium with office, retail and community space. The residential portion had 360 condominium units and 100 affordable apartments, to be rented to households earning 40 percent of the area median income (AMI), or $47,720 for a family of four. Skidmore, Owings & Merrill, which is handling the project’s design, envisioned a brick-paneled base for the first four floors, topped by glassy residential high-rises framed with light facade panelling and inset with large private balconies.

The $1.4 billion development would also bring $50 million in funding to the South Street Seaport Museum, which was forced to close its galleries after they were flooded during Superstorm Sandy in 2012. In the short-term, the endowment from Howard Hughes would help the museum maintain its fleet of historic ships along the Financial District waterfront. Over the next few years, Howard Hughes hopes to help the museum construct a new gallery building at 89 John Street, another lot that the real estate company controls.

However, the developer had to navigate two separate, and controversial, public review processes in order to get the project built. The first involved getting approval from the city’s Landmarks Preservation Commission (LPC), which decides whether new buildings proposed in historic districts are contextual enough to be built. Over four months and three public meetings, SOM and Howard Hughes shrunk the project in hopes of winning the LPC’s approval.

First the building was scaled down to one 345-foot tower, and then again to 324 feet. Ultimately, the landmarks commissioners signed off on a 540,000-square-foot building with 270 apartments, of which 70 will be affordable to New Yorkers earning 40 percent AMI. There will also be 5,000 square feet of community space and 220,000 square feet of offices.

Although a larger building would have provided more affordable units in a neighborhood that has seen much of its rent-stabilized housing deregulated, the LPC focuses solely on whether a building will be “appropriate” for a historic district.

“It’s not really something [the landmarks commissioners] take into account, the affordable units,” said Saul Scherl, the president of Howard Hughes’ tri-state region. “They just care about the appropriateness of the building. A bigger building would include more affordable units. I think we tend to forget that providing deeply affordable units in the area is very important. We’re providing 40 percent AMI where the average household is [earning] over $150,000. More than ever, I think New York needs to deal with that issue of affordable housing.”

With LPC approval in hand, the developer then had to make it through the rezoning process, otherwise known as the Uniform Land Use Review Procedure (ULURP). Despite strident opposition from a group of locals, the development has largely sailed through the seven-month-long process since it began in May. Manhattan Community Board 1 resoundingly voted down the 250 Water proposal in August, but its vote is advisory. Manhattan Borough President Gale Brewer and Councilmember Margaret Chin have lent their support to the project, as long as Howard Hughes delivers on its promise to arrange a $50 million endowment for the Seaport Museum.

Now, the developers still have a few more hoops to jump through. The City Planning Commission will vote on the project on Oct. 20. After that, the City Council has 50 days to hold a public hearing and vote on the rezoning. If all goes according to plan, the City Council will vote before the end of the year, and the proposal is expected to pass, largely because of Chin’s support. But if the vote is delayed until next year, most of the council members will be new to office, including Christopher Marte, Chin’s replacement. He testified against the 250 Water rezoning last month at a public hearing hosted by the City Planning Commission, and would likely vote against the project if he was given the chance.

“Howard Hughes has no right to control all the land and air in the Seaport,” Marte testified at the Sept. 1 hearing. “We don’t want another Hudson Yards, where one developer controls an entire neighborhood. We have no firm commitment that this proposal and the investments they offer will actually materialize. I continue to share a suspicion that they might be creating a strategy to flip 250 Water Street to the highest bidder.”

One significant point of contention is that Howard Hughes would fund the $50 million endowment for the museum by purchasing 250,000 square feet of unused air rights from the nearby Tin Building and Pier 17, which Howard Hughes developed into a three-story building with restaurants and outdoor public space for concerts and events. Naturally, the developer also needs the air rights in order to build at 250 Water, which is currently zoned for a height limit of 120 feet.

Opponents of Howard Hughes’ 250 Water plan argue that the city — which owns the property beneath Pier 17 and thus the air rights — could sell the air rights to a different developer and use the proceeds for the museum. However, Howard Hughes controls the adjacent properties via ground and master leases from the city. That means they are the only owner that would be able to use the air rights, which can typically only be transferred between adjacent properties or lots on the same block.

“Museum trustees have been saying for a year and a half that that money will be put in a lockbox, it’ll be ironclad,” said David Sheldon of opposition group Save Our Seaport. “But until I see an agreement, it’s just all talk. It’s a shell game.”

Scherl, the Howard Hughes executive, said that the company was “working very closely with the city to finalize” the agreement for the museum funding. “The borough president and the council member have made it clear that securing this funding is essential for their support.”

The Save Our Seaport coalition, which includes local parents concerned about the project’s impacts on their children as well as preservationists, has tried to block the development on a number of fronts. Over the summer, the group filed a lawsuit claiming that the LPC ruling on the building ignored the commission’s earlier decisions about previous development proposals for the site. The property’s last owner, Milstein Properties, had tried to develop residential high-rises there in the past, but Landmarks felt that those buildings would “overwhelm and destroy” the largely low-rise historic district.

“Effectively, this LPC action changes the ground rules for historic preservation in New York City by accepting a tradeoff of promises for worthy causes, i.e., the South Street Seaport Museum, and/or affordable housing units for approvals,” the coalition said in a statement last week.

A state Supreme Court justice dismissed the lawsuit on Oct. 6 on the grounds that the LPC decision was “​​not final and thus not ripe for judicial review.”

Sheldon said that Save Our Seaport might try to refile the suit at a later date, and it’s “examining other options” for legal challenges to 250 Water.

Neighborhood parents also want to prevent the development from moving forward because they are worried that the site’s remediation will throw toxic dust into the air. The group, known as Children First, rallied in front of 250 Water Street last month, along with local Congressman Jerry Nadler. The parents, whose children attend two nearby schools, Peck Slip School and Blue School, feel that they won’t be able to keep the school windows open — a requirement put in place to prevent the spread of the coronavirus — while Howard Hughes excavates soil laden with toxic mercury and lead.

“How do you have the windows open and closed at the same time?” Sheldon said. “You’ve got two major health concerns, and two schools full of kids. How do you deal with that?”

Howard Hughes, for its part, says that it hopes to get its environmental remediation plan for 250 Water approved by the end of the year. Remediation would start sometime in 2022, according to Scherl, the Howard Hughes executive.

Some opponents loathe Howard Hughes’ proposal so much that they would rather have a New York Police Department tow pound on the site than a residential tower. In January, some members of the coalition pitched moving the Police Department’s Manhattan tow pound from Pier 76 in West Chelsea — which is being turned into park land — to 250 Water.

“We consider it to be a reasonable alternative,” Seaport Coalition member Michael Kramer told the Gothamist news site at the time. “We’re not NIMBY here.”

Supporters of 250 Water point to the fact that many of its opponents live in nearby Southbridge Towers, a formerly income-restricted Mitchell-Lama co-op development that voted to exit the program a few years ago.

“They’re more concerned about preserving views of the Brooklyn Bridge than any impact on the neighborhood,” said Will Thomas, head of pro-development group Open New York. The tow pound proposal “wouldn’t really respect the historic district or benefit the neighborhood as a whole, but it would preserve the views. [It] kind of shows the intentions of the leadership of the opposition.”

He added, “You have this dynamic where you had people who had affordable housing opposing it for others, to preserve their views and to a large extent their property values.”

Joanne Gorman, another Save Our Seaport member, was more blunt about the group’s plans to challenge the public land-use process for 250 Water.

“We’re waiting to see what the City Planning Commission does,” said Gorman. “If they were to take action that we consider against the public interest, they would be challenged.”

Howard Hughes hopes to use two de-mapped public streets in order to facilitate the air rights transfer from the Tin Building and Pier 17, which are on the waterfront, to 250 Water Street, which is two blocks inland. This piece of land-use minutiae — which is essentially a modification of an existing zoning district for the Seaport — could form the basis of the group’s legal challenge.

“The de-mapped streets are a public asset,” Gorman said. “They’re trying to incorporate them into their development.”

Gorman, who lives in Southbridge, argued that her opposition “has nothing to do with our views, it has to do with a developer breaking the zoning of historic districts.”