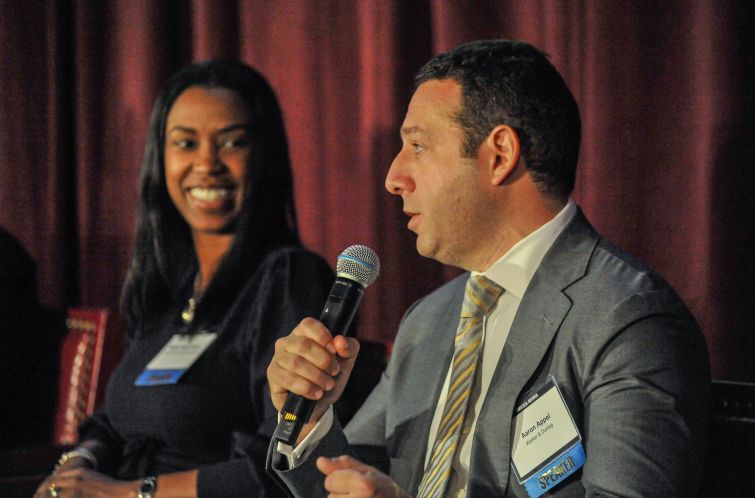 The glass is seemingly mostly half full for commercial real estate lenders and brokers at the end of 2021 with an overarching belief there are tailwinds at the industry’s back heading into next year.

The bullish outlook for recovery in most property asset classes was the consensus of a number of panelists at Commercial Observer’s sixth annual Fall Financing CRE Forum New York, held in person at Manhattan’s Metropolitan Club of New York on Oct. 26.

“Fundamentals across the country are really strong, particularly in the Sun Belt states and some of these large urban cores in New York, San Francisco and others are starting to come back,” Joel Traut, managing director of real estate at KKR, said during the first panel, “Getting Back to Business: Will Q4 2021 Usher in a New Wave of Trends & Opportunities?”

“I think capital is going to start rotating back to where there’s a little bit more yield because you’ve seen pricing become very high in these high-growth markets and cap rates are tighter than what they were pre-pandemic,” he added.

Traut referred to commercial real estate’s rebound from COVID-19 as a “multi-speed recovery” with many southern markets ahead of the curve since they did not experience the same year-over-year multifamily rental declines in 2020. When it comes to New York City, he said  liquidity is beginning to return to the lending market, given some of the city’s positive indicators with apartment buildings filling up after losing a number of tenants at the height of the pandemic. Further, visitor volume is returning as the economy opens up a little more.

Ronnie Levine, a senior managing director at Meridian Capital Group, also sounded an optimistic tone, noting that lenders are looking to increase their market share in the multifamily and industrial sectors. He said there are even some positive signs for retail bouncing back, noting that Meridian has signed 150 leases in the New York metropolitan area this year with about 75 percent of them in the food and beverage arena.

Levine added that while office occupancy in Manhattan is still only around 30 percent, he expects many firms to return soon in at least a hybrid format.

“Even though the tech tenants are saying you can work from home forever, they keep leasing space so clearly I think they believe that people will eventually want to get back to an office and collaborate in person,” Levine said. “Maybe that’s not five days a week, but I think this notion that the office is going away is a fallacy.”

May said there are signs that tech companies, which are driving a number of new leases in Manhattan, have younger employees who desire to be in the office despite having a remote-working option. He remains bullish on the New York office market and even more confident in secondary growth markets Silverstein has been active in lately including Austin, Denver, Raleigh, Nashville and Bellevue, Wash., in suburban Seattle.

Ward cautioned that optimistic signs for the market are offset by near-term headwinds of low unemployment, lower wages and inflationary pressure. He also noted that more lenders are taking risks in high-leveraged deals, which could pose problems due to supply imbalances in the market.

Many have pivoted during the pandemic to take on fewer office deals.

Charlie Rose, managing director for Invesco Real Estate, who spoke during the second panel,  “Reigniting the Debt Market,” said only 13 percent of Invesco’s originations have been in the office sector compared with 50 percent historically as a firm. He said 35 percent of Invesco’s book was made up of office loans going into the pandemic.

Rose also noted that the pandemic has accelerated the private lending space in commercial real estate with more debt funds now in the market. He pointed to data from Real Capital Analytics showing 13 percent of the commercial real estate capital market activity was composed of debt funds during the first half of 2021 compared with eight percent for the past five years.

Allison Pistone, senior vice president in real estate private credit for Cerberus Capital Management, said the firm’s first performing debt vehicle launched at the start of the pandemic proved effective given the dislocation of the market, which provided more demand for transitional lending. She noted that this new strategy enabled Cerberus to originate an acquisition loan in September 2020 for a “tier-one sponsor” for spec office space in the Playa Vista section of Los Angeles that priced at about seven percent, which today would likely be at least 300 basis points tighter.

“We had the opportunity to be very offensive about 12 months ago when many of our peers were sitting on the sidelines kind of working out assets on their books and their legacy positions. and we could go out and be offensive with our new raised capital,” Pistone said. “We were able to capitalize on opportunities when a lot of our competitors were unable to deploy fresh capital.”

Brookfield, an office landlord, has also been able to play offense during the pandemic through syndicating A-notes, according to Flake-Brown. Brookfield completed investments in its $3 billion flagship debt fund at the end of 2020 and is now in the process of raising funds for a sixth real estate debt vehicle, which is expected to total around $4 billion. Pre-COVID, Brookfield’s average loan was around $250 million, but lately deals have been around $100 million mainly in the multifamily space.

“I would say the last 14 or 15 deals that we’ve done have been multifamily assets and that’s been a great way for us to diversify away from office in an open-ended vehicle,” Flake-Brown said. “I think that we’re going to hopefully continue to see that trend because although we have been competing with the banks and also getting the benefit of bank pricing as we lever our loans by syndicating A-notes to banks, we are now starting to see some of those banks push leverage.”

Flake-Brown added that it is a borrower’s market in most asset classes with the exception of some office and hotel deals.

The pandemic headwinds have caused CMBS lenders to take a more conservative route on transactions, especially with a number of refinancings in the pipeline from a surge of deals 10 years ago following the financial crisis. Alison Coen, senior managing director in Greystone’s CMBS lending group, said they will be more aggressive on multifamily, industrial and self-storage deals, but more cautious with office and retail with loan-to-value ratios.

“Today, compared to a couple of years ago, we’re going to be even more conservative,” Coen said during the third panel, “Where Are the Opportunities to Be Found.”

Coen added that cash management has taken on a bigger focus from CMBS investors, especially with multifamily deals because of funding challenges borrowers encountered during the pandemic. She said instead of cash flow sweeps, more buyers are targeting structures that assure a certain amount of available funding per month.

“They want cash management from day one, which was never heard of before,” Coen said. “I think they got burned during the pandemic and realized that there were issues with cash management and so there’s a little bit more focus on that.”

Newmark Senior Managing Director Christopher Kramer, who co-runs execution for the brokerage firm’s debt and structured finance business in New York, said lenders are getting “super aggressive” on deals for multifamily in southeast markets with many construction loans on properties that are around 20 percent pre-leased getting refinanced at around 70 to 75 percent of the cost. He also noted opportunities in industrial as well as select credit-worthy office or hospitality developments like two St. Regis hotel properties — one each in Washington, D.C., and Miami Beach —on which Newark arranged a $250 million refinancing debt package from Credit Suisse on behalf of Al Faisal Holdings.

“When you get into tougher asset classes where maybe it’s office product, which there’s a lot of uncertainty around right now, lenders should still be able to latch on to give a lot of credit for in-place stabilized cash flow with credit tendency,” Kramer said.

Fineman stressed that loans can not be predicated on near-term trends since most loans have between five- and 10-year terms. He pointed to hospitality as an example noting that leisure-oriented hotels have bounced back quicker than anticipated with group business travel expected to soon also recover as workers crave opportunities to attend in-person conferences.

“I remember having conversations with people at work thinking that our multibillion-dollar hotel portfolio was going to be a big problem and it turns out that the second that they let people outside they all ran to hotels,” Fineman said. “It is about underwriting vectors, but we have to discipline ourselves to not just base forward-looking underwriting on the past. We’re all making some bets, frankly.”

While some lenders backed away at the height of the pandemic, others were never on the sidelines and were rewarded.

Jason Kollander, co-head of real estate credit at MSD Partners, said staying active in 2020 deploying long-term capital enabled his firm to capitalize on attractive deals on triple-A securities that were trading momentarily at 70 to 80 cents on the dollar with attractive yields.

“When we saw other people running away from financings or things of that nature, we really jumped in both on the private loan space and in the CMBS market,” Kollander said during the fourth panel, “Where Are the Opportunities to Be Found.”

“We were able to jump in to some of the private loans that had I’d say fallen apart when some other lenders walked away for one reason or another and that enabled us to pick our spots focused on some of the higher-quality sponsors,” Kollander added.

The CMBS market is not expected to slow down in the near term thanks to favorable cap rates that are driving a big surge in single asset single borrower borrower (SASB) deals, according to Paul Vanderslice, head of the CMBS originations team at BMO Capital Markets. Vanderslice noted about 70 percent of 2021 deals have been SASB and while debt markets weakened a bit in late October, CMBS conditions have remained strong overall for 2021.

While the conduit CMBS market has not been as active, Vanderslice said 2022 is shaping up to be a busy one because of around $15 billion in supply from $20 billion of debt scheduled to mature in 2022. He said about two-thirds of these loans have current debt yields in excess of eight percent compared to the weighted average borrowing rates for conduit transactions of 3.46 percent.

Chen noted that while revenue and rent growth are top of mind with CRE loans, expenses should also be factored in when deciding what to underwrite. She said rising labor and insurance costs along with differing real estate taxes in individual jurisdictions make it even more essential to not lose sight of this issue.

Despite challenges that remain, Vanderslice said there is plenty of optimsm on the CRE financing side because of around $300 million in unused equity that has already been raised

“I think sponsors are going to be kind of forced to deploy that and it’s going to use it or lose it, which I think is going to keep cap rates low,” Vanderslice said. “I think lending spreads will be somewhat range bound like 25 to 35 basis points so I’m optimistic that the values will continue to be supported by some of that equity.”