Blackstone Places Winning Bet on The Cosmopolitan of Las Vegas

How real estate giant made $4.1 billion selling the once struggling casino asset. 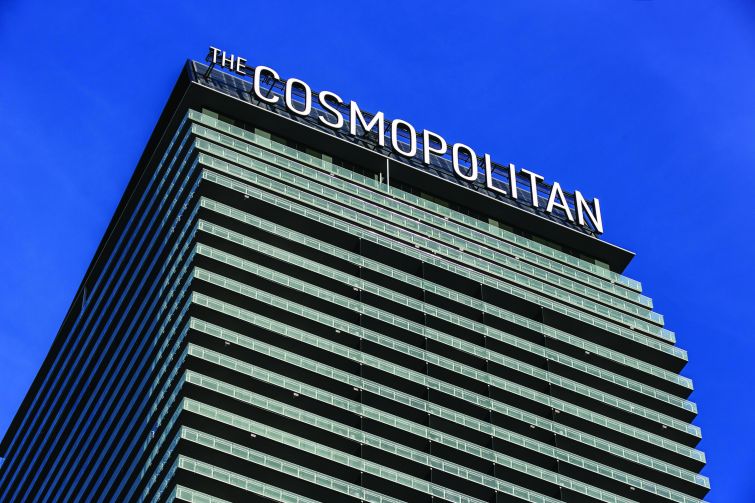 The Cosmopolitan of Las Vegas was sold by Blackstone for $5.65 billion seven years after purchasing the casino/hotel property for $1.8 billion. Photo: George Rose/Getty Images)

Blackstone’s $5.65 billion sale of The Cosmopolitan of Las Vegas late last month signals that casino properties can produce a winning formula with the right pieces in place.

The real estate giant sold the 3,027-key hotel and casino development just seven years after acquiring the Las Vegas Strip property for $1.8 billion. At $4.1 billion, the deal was Blackstone’s most profitable ever for a single asset and came despite a time of uncertainty for the hospitality market as the sector looks to rebound from headwinds caused by the COVID-19 pandemic.

“When we bought it seven years ago, it was considered a challenged asset from a physical perspective and underperformed other top casinos in the market,” said Tyler Henritze, Blackstone’s head of real estate acquisitions Americas. “We bought the asset for 60 percent below what it cost to originally develop and it was only a few years old.”

The purchase of The Cosmopolitan involves MGM Resorts acquiring its casino operations for $1.625 billion with plans for a new 30-year lease agreement and partnership at the expected close of the deal in the first half of 2022. The scheduled new owners of The Cosmopolitan’s real estate assets include Stonepeak Partners, the Cherng Family Trust and Blackstone Real Estate Income Trust, which collectively paid $4 billion for the property.

The Cosmopolitan debuted in 2010 six years after developer Ian Bruce Eichner purchased the site for $90 million with visions of building a 6.9 million-square-foot venue. The project struggled financially following the 2008 financial crisis, and Eichner defaulted on a loan from Deutsche Bank, which took ownership of the property until Blackstone’s acquisition in 2014. The German bank spent nearly $4 billion developing and running the asset.

Press representatives for Eichner did not respond to requests for comment.

The Cosmopolitan acquisition marks the second big Las Vegas casino transaction this year on the heels of Las Vegas Sands announcing its sale of The Venetian casino and convention center for $6.25 billion in March. The deal, which was struck two months after the death of Sands owner Sheldon Adelson, involves Vici Properties buying land under The Venetian for $4 billion and Apollo Global Management acquiring operations for $2.25 billion as part of a triple net lease agreement.

Amanda Belarmino, an assistant professor at the William F. Harrah College of Hospitality at the University of Nevada, Las Vegas, who holds a doctorate in hotel and restaurant management, said that The Cosmopolitan’s big price tag was not a surprise, given the Las Vegas Strip’s high real estate values coupled with it being the city’s second-newest casino. She credited the property with differentiating itself from other Vegas casinos in recent years by successfully marketing itself as a destination for younger people through new dining and entertainment options.

“While the timing may seem strange to observers outside of Las Vegas because of the ongoing pandemic, we’ve seen a pretty fast recovery here and we know that there’s going to be a continued appetite to travel to Las Vegas, so I don’t think that it’s that unexpected,” Belarmino said. “What we do know from other types of deals is that there’s only so much land on the Strip, so I think that some of it is indicative of the uniqueness of property and is also indicative of the destination.”

Belarmino noted that while franchising in lodging deals is common, where one company owns the property and another manages the real estate, it has not been prevalent in Las Vegas until recently. It’s a trend that will likely catch on and become incorporated into future casino transactions along the Strip, she said.

“The Venetian deal is similar to the Cosmopolitan sale,” said Belarmino, a former property revenue manager and senior training specialist at Caesars Entertainment. “This may be a trend in the market; however, since the Venetian sale corresponded with the death of the CEO, it may not be applicable to compare the two.”

MGM’s new involvement with The Cosmopolitan brings it full circle more than a decade after Deutsche Bank approached the company about taking ownership of the project following foreclosure proceedings in 2008, but ultimately declined. The offer to MGM was made at the same time it was in the process of opening up CityCenter Las Vegas, which debuted in December 2009.

Blackstone helped The Cosmopolitan turn the corner after its purchase with a nearly $500 million investment that included renovating almost 3,000 guest rooms, building new suites, and adding 17 new restaurants and bars.

Prior to the pandemic, the property generated $959 million of net revenue for the 12-month period ending Feb. 29, 2020, according to MGM. It netted $234 million in revenue in the quarter that ended June 30, MGM said.

Marcus Threats, a certified commercial investment member with the national hospitality group for Marcus & Millichap, attributes the high Cosmopolitan transaction amount partly to a lot of “cheap debt” available after large-scale stimulus packages out of Washington during the pandemic combined with the property’s solid management under Blackstone. He said Blackstone has proven through this and other deals that it knows how to successfully buy and flip properties after a short time.

While The Cosmopolitan was Blackstone’s first Las Vegas casino play, it has ownership stakes in seven hotels in the city. In addition to its real estate skills, Threats credits Blackstone for hiring seasoned gaming executive William McBeath as president and CEO of The Cosmopolitan. That played a large role in the property’s turnaround and subsequent sale price, Threats said.

“That is truly one of the best hotels and definitely has become one of the hippest hotels here in Vegas,” said Threats, noting that, under McBeath, it has hit high demand despite daily room rates that have averaged $448 a night in 2021. “The market share they have created and from a room-rate effort perspective, it is just a constant winning velocity.”

Henritze said the decision to hire McBeath proved integral in Blackstone’s successful execution of owning The Cosmopolitan, given that it had never tackled a casino deal prior. He said Blackstone is open to future gaming property investments in Vegas that can build off its experience with The Cosmopolitan.

“The management team that we brought in, led by Bill McBeath, and the investments we put into the asset really changed the perception of the property,” Henritze said. “We absolutely would make another investment like this.”

Phill Solomond, head of real estate at Stonepeak, declined to comment on the company’s decision to invest in a major Vegas gaming asset. He said in a statement when the deal was announced that the casino brings to the table “an irreplaceable location [and] durable cash flows” with potential for additional upside.

Stonepeak’s investment in The Cosmopolitan comes as Vegas looks to boost tourism and business travel to pre-pandemic levels, including via its many convention halls.

The latest statistics supplied by the Las Vegas Convention and Visitors Authority showed that hotel occupancy was down 11.7 percent in July compared to the same period in 2019, but the average hotel daily rate was up 19.9 percent. While monthly visitor volume was down 10.4 percent from July 2019 levels, UNLV’s Belarmino said the city’s tourism is on a positive trajectory, which will only be enhanced once conventions return in full force along with an easing of restrictions on international travel.

“Leisure travel has been phenomenal and, if you look at the numbers, we have been breaking numbers in gaming,” Belarmino said. “For leisure travel, it is at pre-pandemic levels, and, in some instances, it has been higher; so that is a really good sign for recovery.”