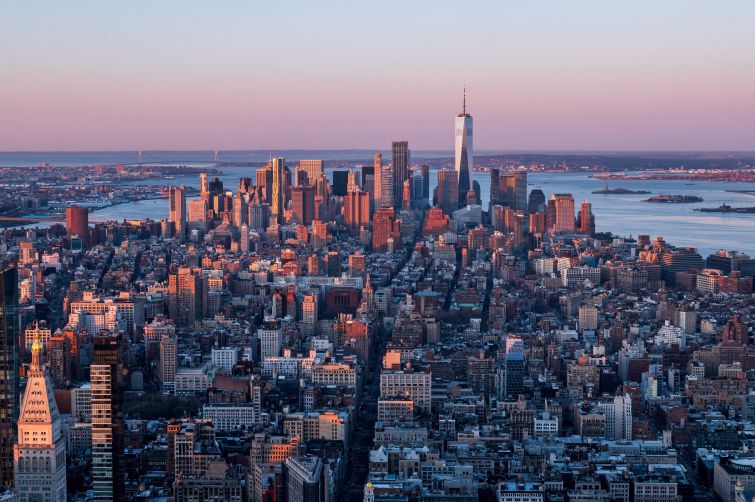 The virtual portion of Commercial Observer’s 2021 Power Gala proved that a lack of personal interaction couldn’t halt the celebratory vibe.

Editor-in-Chief Max Gross and Co-Deputy Editor Cathy Cunningham, both decked out at home in their business formal finest, kicked off the event with Erin Petrey, cocktail editor of Bourbon & Banter, there to make the event’s signature drink, the Berdon Bacao, sponsored by Berdon.

Once cocktails were in play, it was time for the virtual red carpet interviews, starting with Bruce Mosler, global brokerage chairman of Cushman & Wakefield, and Peter Riguardi, chairman and president of JLL’s New York operations. Discussing Google’s $2.1 billion purchase of St John’s Terminal, in late September, Riguardi hailed it as “terrific news.”

“On the supply and demand side, we’re not going to absorb enough space in this market without big tech signing on and committing to New York City,” Riguardi said.

Mosler added that, despite the effects of the pandemic, the deal reinforces that New York remains “the tech capital and the financial capital of the world.”

Melissa Burch, executive general manager of development at Lendlease, and Onay Payne, a managing director at Clarion Partners, discussed return to office, which Burch noted has translated into a fertile environment for transactions.

“We’ve had a pretty intense last year as a business, in a good way, in terms of really using this time to demonstrate conviction in our markets and to grow our pipeline,” said Burch, noting that Lendlease has acquired 1.5 million square feet of new ground-up development opportunities over the past year.

Payne shared a recent quote from Jennifer Johnson, president and CEO of Clarion parent company Franklin Resources, who said the role of the office should be “presence with purpose.”

“As leaders in our firm, I would suggest that the more traditional notion that work has to happen in the office needs to be challenged,” said Payne, who noted that her own return to the office has focused on “social connection with my team.”

Michael Rose, CEO of CO publisher Observer Media, remarked on critical roles played by commercial real estate during the pandemic, from the impact of industrial, logistics and life sciences sectors on deliveries and research, to the health and safety measures undertaken by the office sector.

“Real estate has had a critical role to play in moving the country forward,” Rose said.

Cunningham then led a fireside chat with Mary Ann Tighe, CBRE’s tri-state CEO, and Larry Silverstein, chairman of Silverstein Properties, both of whom joined from 7 World Trade Center.

Discussing the building of the new World Trade Center, Silverstein said his proudest moment throughout the process was the signing of the Moody’s lease, the first major tenant at 7 WTC.

“It gave us instant credibility,” said Silverstein, whose company was also the recipient of the gala’s Economic Recovery Award. “We signed it at a $50 rent, which is higher than most officials told the world that the space was worth. We proved them wrong.”

Tighe, who played a pivotal role in leasing the World Trade Center even before 9/11, reflected on the challenges of the rebuilding process.

“In the beginning, my single, biggest surprise was the brokerage community’s failure to grasp the Trade Center,” Tighe said, recalling a broker who, 10 years into leasing, proudly said he hadn’t been Downtown in a decade and had no intention of going.

“That was always hard for me to deal with,” Tighe said, “because I think of our profession as one that champions our city and our nation, and patriotism alone should have caused people to focus. The good news, though, is that we’ve gone beyond [that].”

In a lightning-round Interview, Peter Weiss, chief real estate officer at Latch, and Jorge Perez, chairman and CEO of Related Group, discussed how the New York-to-South Florida pipeline has been a boon for the Florida real estate market.

Next, it was time for the gala’s awards. Thea Kruger, senior principal at Berdon, presented the Economic Recovery Award to Silverstein Properties, and Amalie Brewer, account manager for the commercial portfolio at Accenture, gave the Green Future Award to Empire State Realty Trust for the climate stewardship of its properties, including the Empire State Building.

Gross then hosted a fireside chat with Ken Caplan and Kathleen McCarthy, global co-heads at Blackstone Real Estate and this year’s No. 1 entry on the Commercial Observer Power 100, discussing the successful management of their investment portfolio and their immersion into the single-family rental market.

“Rental housing has been a high-conviction theme of ours for approaching a decade,” McCarthy said. “With our [recent] investment in single-family housing, it really was expressing our view that there is strength in this asset class.”

Rechler discussed how, after a brief exodus to the suburbs, cities like New York are making a comeback, proving their resilience through the toughest of times.

“Since January, there has been a tremendous flight back to the urban environment,” Rechler said. “We’re seeing a record level of [multifamily] leasing. The stories went from concessions and landlords giving short leases for two to three years, to people having to snap up apartments when they come online. The talent has migrated back to the city.”