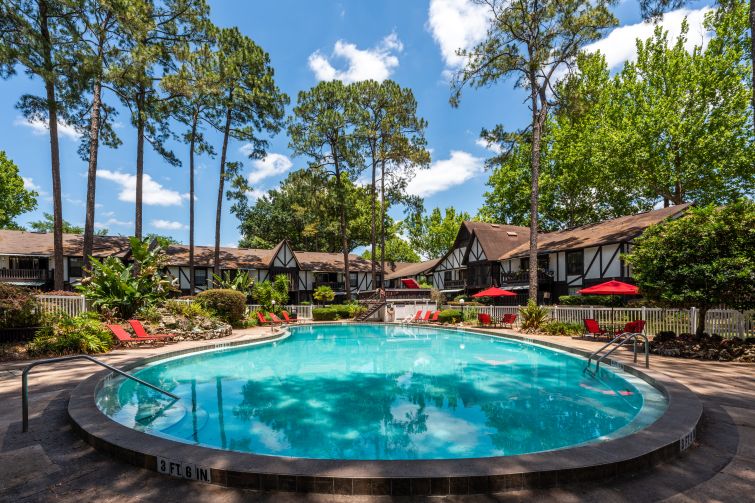 An image of the pool area at Piccadilly Apartments in Gainesville, Fla. Photo: Newmark

The loan helped facilitate Cyclone’s $51 million acquisition of the two-property portfolio including Piccadilly Apartments and Point West Apartments from Hollywood, Fla.-based investor and developer Coastline Management Group, according to Newmark, which advised in the sale and in the acquisition financing.

Newmark’s Ryan Moody, Andrew Visnick, and Kyle Kundiger advised Coastline in the sale, while Newmark’s Henry Stimler, Bill Weber,  Ari Schwartzbard, James Maynard and Kyle Schlitt secured the acquisition debt on behalf of Cyclone. The two properties had been on the market throughout the first half of this year.

“[The debt team] delivered a full-leverage bridge loan with 100 percent of [capital expenditures]  future funded,” Maynard said. “This will allow the sponsor to fully execute its value-add strategy and business plan.”

Coastline had already done some work on the property and was formulating a plan for a fresh value-add campaign on the two-properties when the firm decided to sell, according to Newmark. About half of the units across both properties still have original interiors and are “primed for renovation,” according to Newmark.

“Piccadilly and Point West offer the buyer significant opportunity for growth with continued renovations to the interiors and updates to the exteriors and amenity spaces,” Newmark’s Moody said. “The strategic locations of the properties across from the University of Florida and walking distance to Class A retail place them in one of the most sought-after locations in Gainesville.”

Built in 1972, Piccadilly is a garden-style community that includes 234 apartments, averaging 720 square feet, across 19 two-story buildings, one three-story building, and three one-story, administrative and maintenance buildings. The property includes a business center, a laundry facility, a media room, a swimming pool, a fitness center, a volleyball court, a picnic area and assigned resident parking.

Point West was built in 1969 and sports eight two-story buildings, comprising 146 units, which average about 983 square feet. There is a clubhouse building planned for the site, which will act as the center of a garden-style community that includes a swimming pool, on-site maintenance service and a picnic area.

“[We have] quickly established a foothold in the multifamily space, acquiring over 3,000 units across the East Coast and Midwest,” Cyclone Group Principal Archie Eichorn said. “We have found tremendous success in value-add multifamily properties with strong-in-place cash flow as well as rental upside through top-tier management and unit and common area upgrades.”

Charles Aryeh, a principal at Cyclone, said the firm finds often overlooked assets “by seeking exceptional opportunities to add value where others see none. Our target is quality real estate with hidden value… [we have an] unyielding commitment to quality.”

Both assets are located near a collection of shopping venues, green space and attractions, as well as the University of Florida campus, which is just a mile away.

Coastline has already made “extensive renovations” to the two properties to modernize them, the firm’s President and Founder Eyal Mehaber.

“By implementing a more structured approach to the management infrastructure and executing extensive repairs and renovations, our team was able to increase rent by over 30 percent,” Mehaber said. “Due to the increased demand for housing throughout the region and the superior location for these two sister properties, we strongly believe that there is a lot more room for their income growth potential. Gainesville has grown from a sleepy little college town to a thriving city with world-class shopping and premier healthcare facilities.”

Officials at Arbor Realty Trust did not respond to an inquiry.