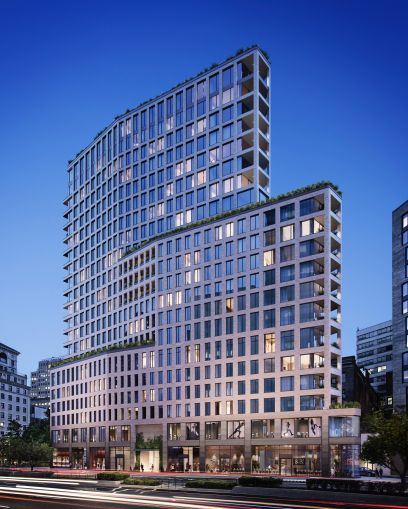 A rendering of One Boerum Place. Photo: Avery Hall

The joint venture, led by Avery Hall Investments, that is developing the One Boerum Place residential tower in Downtown Brooklyn has nabbed a roughly $176.5 million debt package to recapitalize it amid ongoing plans to convert the project to luxury rentals from for-sale condominiums, Commercial Observer has learned.

Vancouver-based QuadReal Property Group and Global Holdings Management Group combined to supply the loan package, with Global Holdings contributing nearly $40.5 million in mezzanine debt in the deal, according to a source familiar with the transaction.

The senior and mezz financing will allow the development group — Avery Hall, Aria Development and Allegra Holdings — to continue converting the planned for-sale condo project into a luxury multifamily play. The asset will have 138 rental units and ground-floor retail space, according to information from JLL, which arranged the debt for the recap on behalf of the developers.

“Pivoting the project to a rental regime was an incredibly difficult and highly complex maneuver,” Avery Hall Founding Partner Avi Fisher said. “The capital stack that JLL arranged provides us with the flexibility to effectuate our business plan.”

Of the 138 rental units that are planned for the property, 40 of them will include private outdoor space, and each will have in-unit laundry. The asset will also sport a roughly 22,000-square-foot worth of retail that will have frontage along Boerum Place and Fulton Street in Downtown Brooklyn.

Building amenities will include a heated pool, a fitness center, a Peloton studio, a lounge, a children’s play area, residential storage space for residents, a pet spa, a sauna, a landscaped rooftop, with a fireplace, and an automated, 47-space parking garage.

“This is an extraordinary property that will appeal to a growing pool of renters seeking the convenience and abundant neighborhood amenities of Downtown Brooklyn, Brooklyn Heights and nearby Boerum Hill,” Peck said. “The project provides a completely unique rental option with large scale family units at a time of enormous growth and momentum in northern Brooklyn.”

Avery Hall bought the plot of land on which the development sits for about $77 million in 2016 and subsequently spent another $16 million to gather enough air rights to build out what it had originally conceived as a condo project. The firm then secured $165 million in construction debt from the British Columbia Investment Management Corporation in early 2019 to erect it, according to city mortgage records.

In 2019, New York’s condo market had already become a big question mark, driven by lackluster demand and a glut of product, before the pandemic ripped through the city’s residential scene the very next year.

About a month before it was reported that exterior work on the 22-story, $250 million project was nearly complete, Avery Hall and its partners decided to switch gears in May and bring a new, luxury multifamily asset to market, which has now been recapped with this fresh financing from QuadReal and Global Holdings. Pre-leasing was launched that month as well, along with a lottery for a chunk of affordable units within the building.

Last month, a lease had been signed for one of the larger penthouse apartments within the 250,000-square-foot development — featuring around 3,000 square feet of indoor space and 2,000 square feet of private outdoor space — at a rate of $27,000 per month, making it the most expensive price ever paid for a Brooklyn apartment.

Monthly rents for its core units range from around $5,000 for one-bedrooms to approximately $13,500 for three- and four-bedrooms, according to listing information from Apartments.com. Many of the listings show apartments that will not be available until December 2021 or February 2022.

Officials at both QuadReal and Global Holdings could not immediately be reached.