Charles Company and Faring will add 280,000 square feet to the office market with new mixed-use projects a couple blocks apart 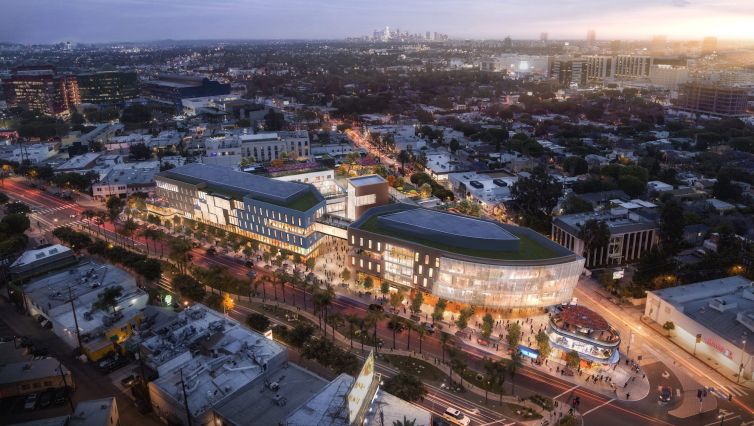 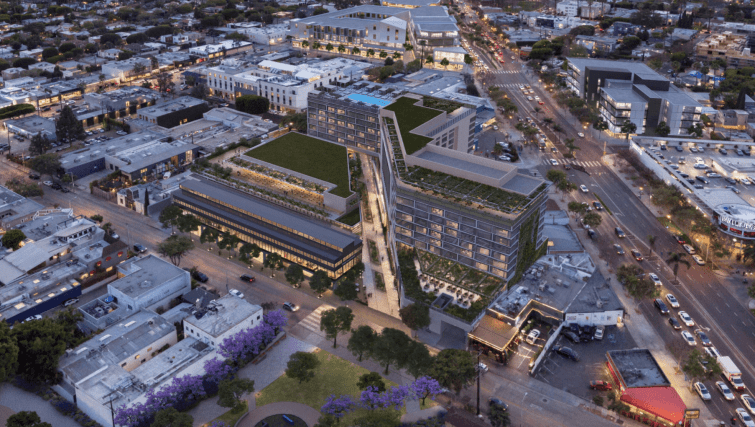 Robertson Lane plans call for two smaller buildings — one with 109 hotel rooms, the other with 35,700 square feet of office space. photo: Faring
Previous Next

The coronavirus pandemic forced people to work from home, but many companies still want workers to return to the office, which is driving new construction on the Westside of Los Angeles.

In anticipation, two developers, each with a major mixed-use project a couple blocks apart in their home city of West Hollywood, want to change course after already receiving entitlements to significantly boost the amount of office space.

The large Melrose Triangle project by the Charles Company originally called for 137,000 square feet of office after it was approved almost seven years ago. But now, the developer wants to nearly double the amount to 245,000 square feet, while reducing the retail and residential space. The 2014 plans called for a total of 76 residential units. New plans from Gensler now include just 41 units, 16 of which will be designated for “low-income,” and 25 for workforce housing. Retail-restaurant space has gone down about 20 percent, from 82,000 square feet to 66,0000 square feet.

Similarly, Faring is redoing plans for the Robertson Lane project on Robertson Boulevard just south of Santa Monica Boulevard. It was first approved in June 2018, and called for 237 hotel rooms in one rectangular, nine-story structure. Now, Faring wants to reduce the number of hotel rooms to make room for office. New plans call for two smaller buildings — one with 109 hotel rooms, the other with 35,700 square feet of office space. Robertson Lane will also feature a nightclub, as well as large meeting and banquet facilities.

Amending entitlements before construction is unusual, but it has happened before. Both developers believe there will be persistent demand for the new creative office space.

“The demand for additional office space in West Hollywood has been strong for years, and the pandemic has only intensified the need for low-rise, creative office space, along with the call for more outdoor open space,” said Jack Kurchian, Melrose Triangle project manager for System LLC, an affiliate of the Charles Company.

“Work from home is never going to go away,” he said. “It’s something new to us, and some people like it and some people enjoy the convenience. But it’s just not sustainable in the long run. People are coming back to the office, whether it’s a large percentage of the company or the entire company. And landlords believe in that.”

Freiberg reported that West Hollywood — which spans just under two square miles — needs the additional office space, as the city’s existing 6 million square feet in the market is currently 85 to 90 percent leased.

“The creative community thrives on the energy which comes from face-to-face interaction in the office,” Freiberg added.

Developers expect that the modern amenities at both Robertson Lane and Melrose Triangle — including ground-level retail, restaurants and showrooms — will attract more creative office tenants.

“The addition of Class A, creative office space to Robertson Lane will drive further daytime activation on this already dynamic campus,” Jake Stevens, vice president of Faring, said. “There is terrific demand for co-located live, work and entertainment facilities, and Robertson Lane will become that new hub of culture and commerce in the West Hollywood Design District.”

The city’s Planning Commission is expected to consider both projects later this year or early 2022. Both expect a two-year construction period.

Freiberg anticipates the two projects will target and attract different tenant types due to their different sizes.

Two blocks east of Robertson Lane, the iconic Pacific Design Center owned by Cohen Brothers Realty Corp. is also 85 to 90 percent leased, according to Freiberg. It’s home to many other creative tech and media tenants, including MGM, Whalerock Industries, A24 Films, Clique Brands and Grindr, among others.