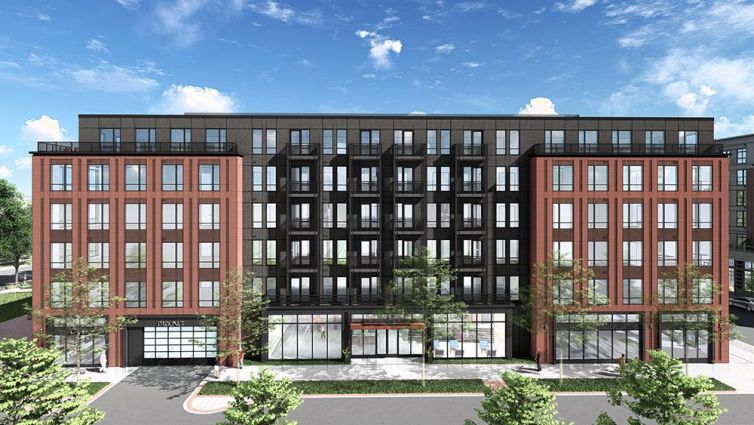 A rendering of Kite House at The Parks at Walter Reed. Photo: JLL

A joint venture between Hines, Urban Atlantic and Triden Development Group has locked in a $58.4 million construction financing package from Bank OZK and Grosvenor Americas to build a luxury condominium development within the The Parks at Walter Reed master-planned community in Washington, D.C., according to information JLL.

The bundle of debt included a $37.3 million, three-year, floating-rate mortgage from Bank OZK and a $21.1 million mezzanine loan from Grosvenor Americas. The funds will help facilitate the build out of Kite House at The Parks at Walter Reed — part of the ongoing expansion of the master-planned community —  which will include 109 condo residences and 11,000 square feet of ground-level retail space.

The developers are planning to start the sales processes for the condo units in February 2022, with an aim to start bringing the residences to market in early 2023. The project — which will be located at Georgia Avenue Northwest and Elder Street Northwest — will sport a mix of one-, two- and three-bedroom condos that will span 830 square feet on average.

“With the closing of Kite House, the development team continues to build out the transformational Parks at Walter Reed project,” Leachman said, adding that there was “significant” lender interest in the project, due to the recent successes of The Brooks condo development inside the master-planned community and the fact that Kite House will be situated next to a Whole Foods Market.

The development of Kite House is a continuation of the ongoing build out of the developers’ Parks at Walter Reed master-planned community, which they began in earnest in the fall of 2016. The trio engaged in a ground lease agreement with the District of Columbia at that time and moved forward with its plans to develop 66 acres within the massive Walter Reed Army Medical Center campus that is situated in northwest D.C. For more than a century, the site served as the primary medical center for the U.S. Army; it was shuttered for use by the military 10 years ago.

Hines, Urban Atlantic and Triden won the assignment as master developer from the District of Columbia in 2013, after a “competitive bidding process,” according to information from Hines’ website.

Altogether, when fully developed — a phased timeline that Hines said in 2016 would span 10 to 15 years — The Parks at Walter Reed will have around 3.1 million square feet of mixed-use commercial property across 66 acres, facilitating a live-work-play feel. The work will be a mix of new construction and adaptive reuse of existing buildings on the site.

The plans, as outlined out Hines’ website at the time its group started the construction processes, would see the development of more than 2,100 units of rental and for-sale housing, 432 of which would be affordable units; around 250,000 square feet of grocery-anchored retail; 185,000 square feet of office space; a 200-room hotel with a conference center; 30,000 square feet of space reserved for arts and cultural uses; 116,000 square feet of medical space for outpatient care provided by Howard University Hospital; two language-immersion secondary charter schools; and about 20 acres of green and open-air recreational space.

Kite House will benefit from a nearby development called the “Marketplace,” which serves as a town center and includes a variety of shops and restaurants and other retail offerings, including Whole Foods. Its community center purposes can be seen through its inclusion of public art displays, outdoor seating, and dining areas and lounge spaces.